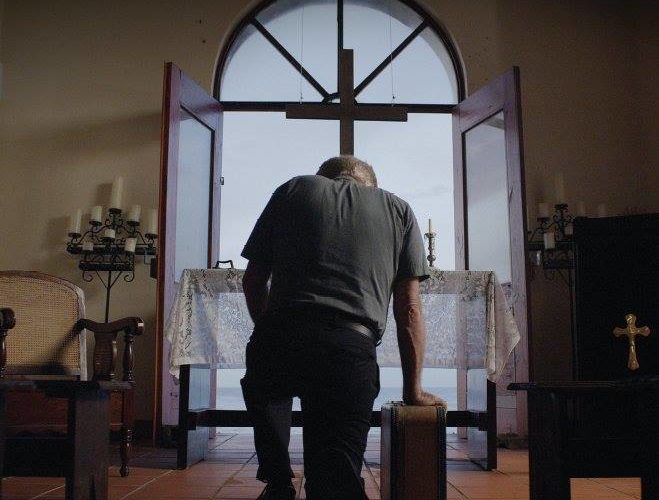 Directors of a certain auteurist stripe serving as producers for up-and-comers and protégés can be a mixed blessing. On the one hand, they may over-exert their influence and end up railroading the intentions of their mentee. A younger, less experienced director, when faced with working under the tutelage of their idol, could let their own intentions and art be subsumed by the vision of their elder. If the two collaborators are on the same level visually and existentially, though, then the fusion of established name with emergent talent can be something sublime and beautiful.

The Vessel, blessedly, fits into this latter category. Directed and written by Julio Quintana and produced by Terrence Malick, it is the rare film in which the guiding hand of the artist-as-producer feels not overbearing or dominant, but rather paternal and knowing. It is obvious that this is entirely Quintana’s movie, his vision and his spirit, and that Malick’s influence was motivated out of harmony with that vision, rather than out of a desire to direct it in his own way.

Set in a seaside town recovering from an almost unthinkable tragedy, The Vessel deals with pet themes that are associated with Malick but should not be unfamiliar to anyone given to questioning the meaning of life, God, our place in nature, or the efficacy of love to heal the soul. Years ago a wave overtook the town and destroyed the elementary school, sweeping all of the town’s children out to sea. In this wake of this incredible and incomprehensible loss of life, the town itself has begun to die. No one is having children, the school remains destroyed, and life has begun to give itself over the atrophy. People either leave for the city, or remain in the ruins of their lives to die slowly.

Floating through this wreckage, coaching hope and a return to life, is Father Douglas (Martin Sheen), a catholic priest who ministers to the ill and dying and counsels the town as best he can. For the most part, however, he is a totem kept in place mainly by his sense of duty and his desire to heal rather than any true sense of hope that he can succeed. Through violence both physical and spiritual, he has been cowed from trying to openly suggest that having children, rebuilding the school, moving on, is a good idea.

Observing the priest, and the town as a whole, with philosophical and romantic remove, is Leo (Lucas Quintana). With a mother in a state of perpetual shock and a brother lost to the wave, Leo does not lack for reasons to despair with the rest of the town, though he is more well-adjusted than the rest. Portrayed with wounded, empathetic fatigue by Quintana, Leo becomes the platonic ideal of a mournful protagonist. He feels acutely the sadness around him, and observes it unflinchingly, but he is not morose and consumed by it. Instead, when a friend decides to move to the city, he fixes his motorbike to aid in the journey.

How the film progresses and how the plot unfolds is a divine and spiritual pleasure. While Quintana and his cinematographer Santiago Benet Mari have obvious taken Malick’s influence in terms of style and aesthetic, he has not adopted his producer’s sense of narrative ethereality. The characters in The Vessel have arcs, conversations and relationships fleshed out through dialogue and real moments together. Despite the camera floating, swinging, taking in naturally lit environments and lingering on especially painterly compositions, the film takes time for true narrative beats. That these beats ask and explore questions related to grief, healing, and religious purpose is an indulgent intellectual treat.

That the ending fails to satisfy as much as the previous hour and twenty minutes tantalized is the pitfall any movie of such grace and nuance must negotiate. The soulful performance of Martin Sheen as the besieged priest can act as its own locus of interest, but can he ever be given a satisfying destination in a narrative sense? Leo can reject and embrace the way the town’s perception of his changes throughout the film, but if the question is the point, how definitive can one make his climactic choice? The film staggers as it tries to deal with both of these ideas, but the breathtaking beauty of both its images and ideas makes the sting of his stumble less deeply felt than it ought to be.

Tragedy and its attendant grief are rarely met with a spectacular and victorious force. They aren’t dragons to be slain, they are forces of nature to be weathered, outlasted, or adapted to. The Vessel deals with the ways in which people fail to do those things and what it takes to shake them from their torpor. In seeking to grant a cinematic end to that inertia, the film forfeits a bit of its understated subtly and introversion. All the same, the journey to that point, and its ultimate message, is as powerfully felt and gorgeously realized as anything one may see on screen this year.

The Vessel opens in limited release on September 16.