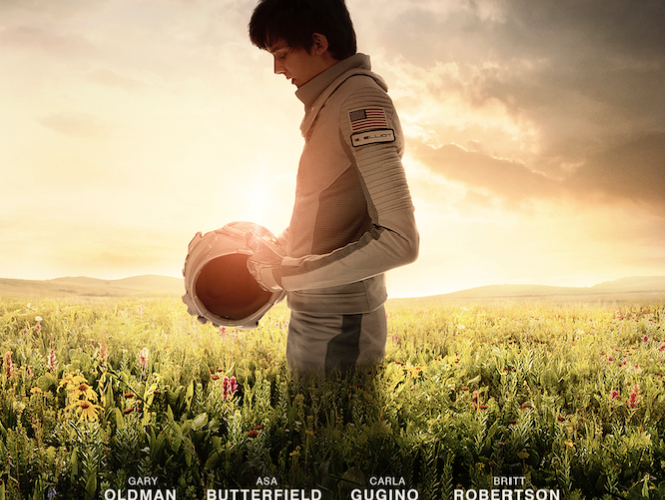 Review: ‘The Space Between Us’ Undershoots its Potential and Flails Between Genres

Boy meets girl. Boy falls in love with girl. Oh, but did I mention that boy lives on another planet? So is the premise that carries The Space Between Us, and it’s one that is packed with potential. Unfortunately, while this film might be shooting for the moon — or, in this case, Mars — it sadly doesn’t even land among the stars.

Asa Butterfield stars as Gardner Elliot, the classified boy who was born on Mars shortly after his astronaut mother arrives on the planet for a multi-year mission. Cutting to the chase: mom dies in childbirth, leaving Gardner to be raised by scientists in East Texas, the Mars space station he comes to call home for sixteen years. Gardner’s best friend is a robot, who is awfully — and I do mean awfully — reminiscent of a certain highly-opinionated droid from the famous Star Wars saga. He expends his teen angst doing donuts in a moon-rover vehicle on the red sands of Mars, and, of course, falls in love with a sassy yet beautiful Colorado teenager via instant messaging. This teenage love interest, Tulsa (Britt Robertson), is about as angst-ridden as they come, herself being orphaned as a child and never quite feeling like she has a home or sense of belonging — and we all know that two teenage misfits equals a Hollywood story.

Gardner eventually makes his way down to Earth after throwing a hissy fit and nearly killing himself in a moon-rover accident. Naturally, once on Earth, he escapes from his hospital room at NASA to find Tulsa at her high school in Colorado. Unbeknownst to him, doctors find out soon after his escape that his heart won’t be able to stand the Earth’s gravity and his life is in imminent danger the longer he remains on the planet. But none of that stops Gardner and Tulsa from repeatedly escaping NASA’s grasp and continuing to fly planes, steal cars, and have a pubescent love scene in a dessert canyon all while trying to search out Gardner’s father. (You know, playing back into that “sense of belonging” theme this film so bluntly races after.)

The film’s most interesting moments arrive when Gardner is presented with something he’s never seen before, having lived his entire life on Mars. His first encounter with a horse garners a chuckle, as does his reaction to a rainstorm — a simultaneously beautiful moment, and the kind of scene the filmmakers would have been smart to continue chasing throughout the film’s entirety. As for the love story that director Peter Chelsom is banking on: it renders forced, lacking any genuine sense of intimacy. It also comes across indefinitely trivial compared to the grandeur of a boy stepping foot on Earth for the first time in his otherwise Mars-isolated life.

The Space Between Us doesn’t seem to know exactly what it is. At times, I was convinced that I was watching a sci-fi, futuristic film that was going to have some major commentary on human life — until I was immediately pulled out of that daydream and into an awkwardly executed teen romance, then subsequently thrust into an airplane-crashing, car-chasing action flick. Making matters worse is that these lattermost scenes of high-budget explosions seem to cross off a checkmark rather than a natural next step in the story’s evolution. It’s a sci-fi-teen-rom-actioner, if you will, and I mean that in the worst way possible. This is a film that doesn’t stick with any genre, but instead clumsily navigates between all three, ultimately leaving the viewer feeling shortchanged in every area.

The Space Between Us is now in theaters nationwide.