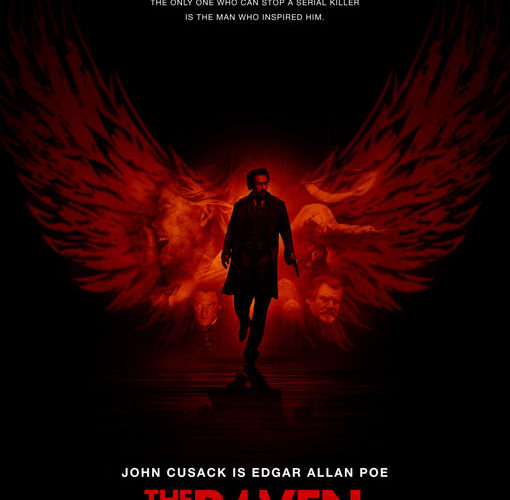 If one imagines a 5th rate combination of B-movies Sherlock Holmes and From Hell, you’d end up with The Raven. James McTeigue‘s is a competently made picture that is also lifeless, uneven and laughable; the kind of mess that gets worse as the minutes dwindle down. The premise and opening draws intrigue, but McTeigue’s latest continually devolves in to a dreadful experience. Set in the foggy streets of Baltimore, the 20th Century icon and drunk Edgar Allan Poe (John Cusack) is a down-and-out writer. His return to Baltimore is quiet and depressive, with no one appreciative of his intellect and his writings. The only character who does appreciate his talents is the most dangerous fanboy in recent memory: a serial killer. The killer starts taking pages from Poe, having his murders replicate the violence in the author’s writings. This is not something the drunken Poe would ever want to get involved in, but after his fiance Emily Hamilton (Alice Eve) is kidnapped by the madman, he has no choice but to attempt to stop him.

If anything could be said in the defense of The Raven, it is McTeigue’s control over atmosphere. No one can deny the frequent Wachowskis collaborator does not know how to frame a money shot filled with lush imagery. McTeigue has obviously studied Poe’s writings deeply, as you can see he’s emulated the style and atmosphere of his work near-perfectly. However, the admiration for the director’s visual skills wears thin after the first few minutes. Some pretty frames can’t make you look past the plodding story, the tonal missteps, and miscalculated performances. This is the type of period film where it feels as if everyone is playing dress up. Cusack, who even when off is at least reliable, is woefully miscast. There is never a singular clear voice for Poe. Does McTeigue and Cusack want Poe to be a buffoon? A tortured artist? Maybe both, but it never blends together in a cohesive way. Cusack, a modern brand of actor, is out of place here. To defend him a little, not many actors could say, “I will send you to hell! Huh? To hell!” and look good afterwards.

But Cusack, surprisingly, is not the key example of miscasting. Both Alice Eve and the promising Luke Evans (playing a Baltimore detective), like Cusack, never find a proper tone. Every actor is on different pages, as if they were never told what type of movie they were acting in. Eve’s lack of a memorable presence deflates the core drama of Poe wanting to save Emily. It is difficult to care if Emily makes it out of this predicament alive, or whether Poe finds her.

The Raven shifts from hollow camp to acting overly serious, the latter of which assisted by Luke Evan’s raspy voice and clunky exposition. McTeigue is a talented director, but based on The Raven and Ninja Assassin, it’s clear he’s burdened by his lack of storytelling skills.

The Raven is now in wide release.