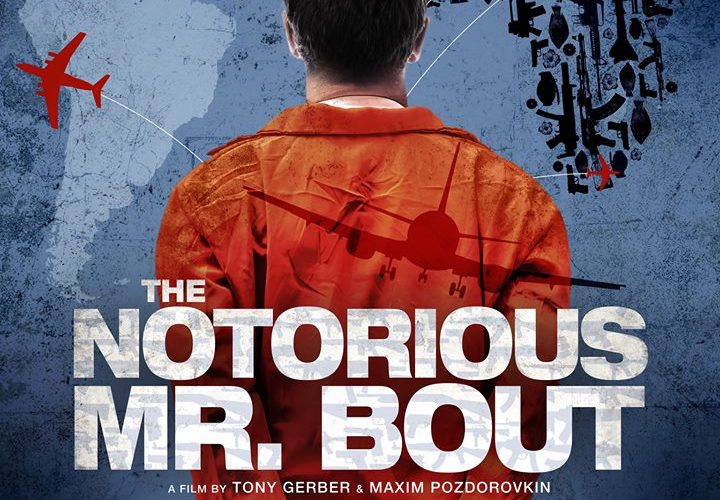 I enjoyed Andrew Niccol‘s Lord of War when it came out in 2005. It was a fast-paced, enjoyable ride down the rabbit hole of the illegal arms trade, but I had no idea Nicolas Cage‘s character Yuri Orlov was based on a real life “Merchant of Death”. His name is Viktor Bout and he wasn’t even arrested until three years after Hollywood sensationalized the myth of his businessman seen as an international criminal throughout the media. As directors Tony Gerber and Maxim Pozdorovkin sought to tell a tale within this sector of gun smuggling, he of course would prove the logical subject to focus on. The fact he was an amateur filmmaker who documented his travels via home video only made the prospect more intriguing. Their documentary The Notorious Mr. Bout begins with the 2008 sting operation that brought the titular Russian down. There he sits in grainy black and white surveillance footage across from men seeking his services to move artillery with the goal of taking American lives. It’s easy to assume Bout himself was anti-American, but it isn’t like he called these men for that cause. They contacted him, the US-hatred their own—he took the meeting because he had a plane to sell and they wanted to buy. In comes the DEA with handcuffs, taking Bout under the auspices that the world was now a safer place. As the story progresses to show us his early years and the particulars of this arrest, however, the truth isn’t so obvious.

Bout’s wife Alla features prominently given that she supplied the directors many of the personal videos used. The story they unravel is one of a very intelligent, charismatic family man who excelled at capitalism in its infancy within Russia. When Boris Yeltsin took over as the first president of the Russian Federation the country was unprepared for the change and Bout took advantage. He started an import business that brought in goods the nation had been prevented from buying previously. The venture was a success that made him a millionaire by age twenty-five and in the position to purchase old USSR cargo plans from the government. It’s with these that his relationships in Africa and Europe blossomed to position himself as the guy to contact for gun smuggling. The story’s a fascinating one told via these movies, archived footage, and new interviews with the DEA agents who staged the sting, Bout’s brother Sergei, his bodyguard, and a couple journalists with expert knowledge of the case. Where it intrigues the most is when we see Bout in his natural habitant going about his business as an innocent entrepreneur—rolling out dough in the dining room while explaining the concept of entropy as it concerns the universe to friends. The rub is that Viktor didn’t believe himself a criminal. He was merely a middleman who supplied a service that clients may or may not have taken advantage of with or without his knowledge. He’s far from a kingpin and yet his success altered perception into believing he was.

This is the angle I hoped to learn rather than the basic history lesson into his illegal deeds that’s ultimately supplied. The Notorious Mr. Bout therefore becomes more 60 Minutes exposé than cinematic must-see. It’s political ramifications about whether or not the DEA’s sting was cut-and-dry entrapment piques interest before being relegated as a footnote. Bout’s relationships with warlords and terrorists are shown briefly in photographs or video without going in-depth—Viktor simply standing in the fringes smiling. Perhaps this is a result of the truth revealing how his dealings were strictly business-related. In this way you can almost read the film as a tool to exonerate him, but it doesn’t even embrace that direction fully. It merely delivers facts and leaves the rest to us. By not finding a hook beyond Bout’s crazy life itself, the whole becomes repetitive. Gerber and Pozdorovkin hope to retain interest by rewinding and fast-forwarding—sometimes literally—through time with the sting shown at beginning, middle, and end to subsequently supply more information and string us along. It’s an effective maneuver and does extend a story that Bout’s home videos sadly cannot by themselves unless the goal was to strictly humanize him. After showing his wedding and the birth of his daughter—which he missed for a job—however, the focus turns to the company. Yes, it’s worthwhile to see the timeline of success from Brussels to Sharjah to Africa before 9/11 turned his world upside down with ports shutting their doors, but to what end?

As much as being about Bout, the movie focuses heavily on the DEA arrest. His rise and fall from an unchecked confidence that he couldn’t be stopped—and the US truly had nothing to convict him with before the sting—is a journey to the sun. So we have the case and the man, both aspects never allowed the breathing room to engage above the other. Laying down information to educate as though a news report may be enough for some, but I need more to invest. I need more than maybes that never get carried to fruition. Should Bout have been the scapegoat for arms smuggling? Perhaps not. Should he be in jail? Definitely. These aren’t epiphanies, though. The judge’s sentence alone says it all succinctly enough.

The Notorious Mr. Bout is available via VHX through the film’s website starting November 3rd.