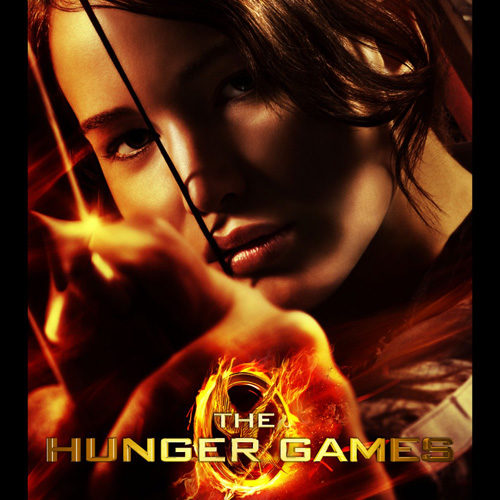 An amalgamation of post-apocalyptic science-fiction and primal survival story, with a touch of romance, it is no surprise that The Hunger Games is being presented as the next big event film. With a tagline that couldn’t be more appropriate (“the world will be watching”), Gary Ross adapts the Suzanne Collins best-seller into an entertaining fantasy adventure, skillfully accentuating the emotional beats and character-focused storytelling.

Beginning in the outcast-filled District 12, a territory on the outskirts of this dystopian nation known as Panem, 11 more Districts lead up to the haven known as The Capitol, occupied by the vibrantly dressed 1%. As a punishing reminder of the rebellion by the now-destroyed District 13, each year a boy and a girl, known as “tributes,” are selected via random lottery and the chosen 24 battle to the death for spectacle of the elite. During this selection, or “reaping,” Ross employs a suppressed stillness in the audible landscape, a technique that many other blockbusters forgo. Utilizing T-Bone Burnett and James Newton Howard’s stirring score elsewhere when strictly necessary, this scene is nearly silent, as only announcer Effie Trinket’s (Elizabeth Banks) nervous laughter tears through this crowd, whose faces are overcome by a wave of fear. Commendably finding the quiet, rather than having what could have been an overproduced mess, adds to the tension found in the increasingly bleak situations our characters are faced with.

Jennifer Lawrence proves to be the perfect choice for Katniss Everdeen, a quiet, independent character who brings to life her vulnerability and cleverness without any of the needless inner dialogue found in the novel. It is with distinct pain in a fleeting goodbye that she valiantly coerces her mom, still distraught over her husband’s death as a cole miner, to snap back to reality to protect her sister’s life. Not burdened by the opposite sex, the film also smartly toys with her relationship with fellow tribute Peeta Mellark (Josh Hutcherson) as a device necessary for the games, as we aren’t confident in the veracity of this love, yet still invested in the outcome. Shot with tight framing, Tom Stern‘s claustrophobic cinematography is a double-edged sword. He captures moments of beauty, such as close-ups of Katniss’ tense face right before she uses her bow & arrow in heated situations. Other cases prove to be detrimental, often smothering what could be well-designed action bits and world-building. Important events are sometimes incomprehensible and simple establishing shots such us our first look at life in District 12 annoyingly jitter all over the place. (While it’s impossible to assume credit, there are a few shots that 2nd unit helper Steven Soderbergh clearly had a hand in, leaving one wishing he had much more of an influence.)

Considering the plot of children violently killing other children, one could argue this style is the only way they could get away with such atrocities. But it not only muddles up key conflicts, editors Stephen Mirrione and Juliette Welfling come from the camp that five quick inserts do more for storytelling than one fully realized shot, which is not a filmmaking philosophy I have faith in. Katniss’ first arrival on eccentric reporter Caesar Flickerman’s (Stanley Tucci) broadcasting stage is so cut up that I was yearning for a single, elegant Dont Look Back-esque entrance that could have better placed us into the character’s apprehensive state of mind before her reveal to the world. Where this film falters in technical cohesion, it makes up for with its smart execution of the big science-fiction ideas. The portrayal of the totalitarianism state led by President Snow (Donald Sutherland) is blunt, but never vapid. The most riveting detail comes with the inclusion of the Gamemakers’ point-of-view, an aspect greatly expanded from the novel, which kept the story behind Katniss’ eyes. This group of people led by Seneca Crane (West Bentley) are able to completely control the proceedings from their own comfortable lair. Think The Truman Show, but much more evil. Just as Snow is able to control his entire nation, it is captivating to see the parallels with how Crane does so on a smaller scale.

For both fervent fans and timid newcomers, The Hunger Games strikes a rare balance of intelligent, crowd-pleasing entertainment. Despite its technical faults, Ross presents a large ensemble of smart characters (highlighted by the boisterous Woody Harrelson and caring Lenny Kravitz) that are worth rooting for, and an accomplished science-fiction world full of possibilities. Unlike other films for a young adult demographic, this is one franchise I’ll be glad to see continue.