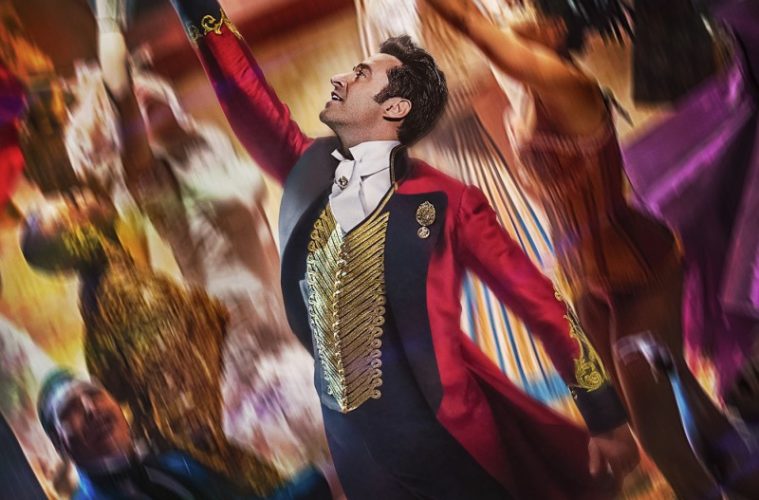 Best to get this out of the way first. Though The Greatest Showman, directed by visual effects artist and first-time filmmaker Michael Gracey, tells the story of P.T. Barnum (Hugh Jackman), a vast majority of the real man’s history has been white-washed to make way for this very digestible (and sometimes very enjoyable) movie musical. This version of the Barnum story, from a screenplay by Jenny Bicks and Bill Condon, spins him as the imaginative boy of a hard-working father who’s always barely making ends meet. Exposed to the scars of class warfare and the kindness of those with less to give, Barnum grows up determined to make his mark on the world and win the hand of Charity, his childhood love from the richer side of the river. Soon enough, Charity (now Michelle Williams) has become a Barnum and is happy living the simple life in London with her husband and their two adorable daughters. It’s not enough for P.T., however, who continues to risk it all on cock-eyed entertainment ventures. Until one day he discovers how to utilize those who are different. Little people, bearded ladies, African-American gymnasts (GASP!). And here is where Gracey and his team walk a pretty thin tightrope. The premise is that Barnum loves these people in a way that most of the ignorant world does not. And through his respect in their otherness, they are able to love themselves and feel a sense of worth performing in what will become the legendary Barnum & Bailey Circus. It’s a big swing in oversimplification that a Google search reveals to be mostly erroneous.

That said, the message is strong, the musical numbers from Benj Pasek and Justin Paul are catchy and the performances splendid. How appropriate for Jackman to be the lead in a movie called The Greatest Showman. The man is so entertaining and likable you’ll spend your time in the theater trying to convince yourself that maybe Barnum was an alright guy. Nearly as charming is Zac Efron, singing and dancing with a zest and confidence that is hard to quantify. He plays Philip Carlyle, heir to a hoity-toity New York family and best chance for Barnum to become respectable in the eyes of all of those rich people who’ve spit on him for years.

The duo recruits Swedish opera singer Jenny Lind (Rebecca Ferguson) to tour across the States (which did happen in 1850), Barnum briefly abandoning his family and troupe of lovable performers. “Never Enough,” performed by Loren Allred, is featured during this sequence and a rollicking standout. Another highlight is the young actress Zendaya, whose had a big year between this and her solid turn in Spider-Man: Homecoming. She plays Philip’s love interest, their interracial romance a point of contention for his bigoted mother and father. Though Efron and Zendaya could use a bit more chemistry together, their trapeze showpiece is a memorable bit.

Ultimately, the whole point of the picture comes down to the tune “This Is Me.” The crux of the song, led by the impressive Keala Settle, is to be comfortable in your own skin no matter what the masses may say. It’s hard to fight against this kind of positivity, as delivered by these kind faces and kind songs. The Greatest Showman, despite its flaws, is a winning piece of work.

The Greatest Showman is now in theaters.