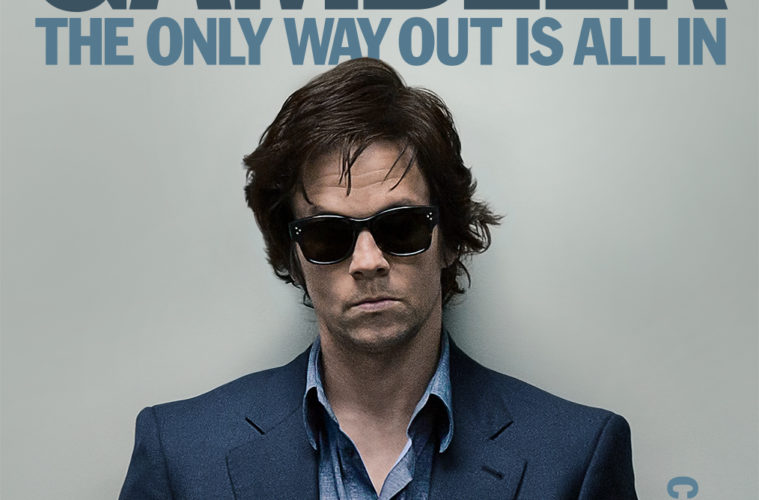 Opening with cold, narrative efficiency, Rupert Wyatt’s remake of Karel Reisz’s 1974 film is a stylish mess. Mark Wahlberg stars as Jim Bennett, a down-on-his-luck English professor from a wealthy family, including father Ed (George Kennedy) and mother Roberta (Jessica Lange), who refuse to fund his gambling addiction. Jim’s problem is he doesn’t know when to stop, accumulating winnings he blows for no good reason other than the thrill. He quickly becomes deeply indebted to Korean kingpin Lee (Alvin Ing) and a “business man,” Neville (Michael K. Williams), whom he arrogantly insults. After exhausting the available options Jim turns to local loan shark Frank, confidently played by a frequently shirtless John Goodman.

While stylishly composed and edited with music composed Jon Brion (and Theo Green) that recalls the artist’s work with Paul Thomas Anderson, The Gambler never quite takes off. Amongst notes of recognition are extended sequences in the classroom, in which the film has the confidence to allow oral arguments made by Jim to his students to play out for longer than they would in a run-of-the-mill action thriller. His interactions with his students, particularly Amy (Brie Larson), a young, pretty talented writer who works as a waitress of Lee, are narratively convenient and often problematic. Consider two athletes that are enrolled in lecture: Dexter (Emory Cohen) a stoner kid whose ranked as one of the best tennis players in the nation, and Lamar (Anthony Kelley) an all-star basketball player. While William Monahan’s screenplay fleshes these guys beyond the a plot point, they never quite have an adequate payoff as suggested earlier in the story. A theme of an early sequence is Jim is surrounded by three natural talents in a sea of lecture hall mediocrity, himself curious as to his status. He’s a son of a rich kid whose parents built an empire that allows mom Roberta to have daily lessons with a tennis champ and not blink when she takes out $260,000 in cash from her bank. Jim, feared to be a one-trick pony and thought to be suicidal by his creditors, turns to gambling, a proposition that is as fraught with chance as an attempt to write the great American novel. Often, he doesn’t mind getting in over his head, while the film runs off the rails.

Wasted is Larson as Amy, a talent dying to stand out until she is recognized. Working nights for Lee as a waitress in the casino she hides in the lecture hall in army surplus outfits and glasses. They bond upon inviting Jim to go on an adventure, but an actress this smart ought to be doing more than playing the convenient dream girl that becomes a metaphor for Jim’s controlled self-destruction. Perhaps these sequences exist as an origin story for the kind of Joyce Maynard-J.D. Salinger fling that will inspire Amy’s writing. Either way, Larson, a brilliant actress in Short Term 12, is given too little to do in a screenplay that lacks a compelling perspective towards Amy.

Watchable scene-to-scene as an old-fashioned character study, Wyatt’s opening sequences and interstitials counting down the days until the situation resolves itself promise flourishes of noir elements. The grit is ultimately missing, however. Sure, violent things happen in LA’s dark alleys, but despite a solid performance by Wahlberg, a sense of tense immediacy is never truly felt. Perhaps watching a member of the lucky sperm club gamble away more than double the US median household income several times, in a post-Occupy Wall Street moment, lacks a certain appeal.

The Gambler is now in wide release.