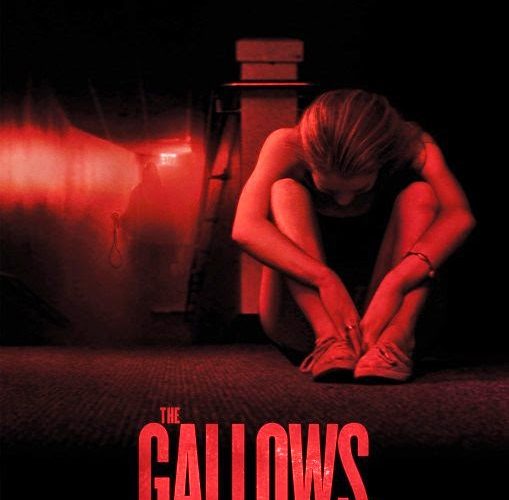 A found footage film set in a high school, The Gallows is a movie (essentially) made by teenagers, with a teenager’s intelligence, and for teenagers. This micro-budget project is simply a major studio’s weekend rental of marquee space, but when gauging it as an actual movie, you can perceive that it’s not a very smart one. But even teenagers, who are an inherently brainless species, will likely take umbrage with how poorly their ilk is represented in this story from writer/director duo of Travis Cluff and Chris Lofing. They know first-hand that a battery is killed much faster when you use the camera AND the flashlight at the same time. Did they at least remember to turn their phones on airplane mode?

Unintentionally, The Gallows highlights the core importance of motivation in found footage movies by having none of its own. It’s a movie where absolutely nothing matters. The endangered folk, the reason for their cameras to be on during their moments of terror, or the inciting idea that puts them into an auditorium, at night, in the first place. These movies require a big sense of purpose for characters to want to record this stuff instead of just running, and to keep the recording going even when it puts them right into danger. Even the recent found footage movie Project Almanac makes it clear from the beginning that the recording will go on, with the direct dialogue of, “From now on, film everything!” But The Gallows bellows an albeit teenager-like “AS if!” to establishing a why, and just wants to be a haunted school tale, with unlimited passageways and supernatural cameos, for the iPhone generation. If these whippersnappers had brought flashlights with them, there would be no movie at all.

The Gallows is also the name of a school play that earned a bad reputation (okay, someone was mysteriously hung on stage during production) when it premiered in 1993. Over two decades later, the school has decided to put the show back on, despite that whole death thing, and the way in which students are superstitious about the name of murdered person (Charlie Grimmell, of whom this movie is dedicated to). Why do they decide to put on the show again? Are high school productions that hard-up for attendance that they have to play the deadly hits?

As teenagers are apt to do, they defy the deadly superstition, instead honoring the age-old tradition that no nerd shrine must stand without some jock damage. So, Ryan (Ryan Shoos), his girlfriend Cassidy (Cassidy Gifford), their friend Reese (Reese Mishler) break into the high school, where they try to vandalize the play’s set. Of course, they take the camera with them, because teens are smart enough to save their crimes for nighttime damage, but not to resist recording evidence of their involvement. Soon into their vandalism, the trio are found out by drama queen Pfeifer (Pfeifer Brown), of whom Reese is trying to suppress his crush for. When the quartet tries to leave, all exits are locked, and their high school becomes a death trap.

Whereas other found footage films make it a point to have a filmmaker-like person recording the bonanza, expressing their passion for documenting the unbelievable, The Gallows has a lazier explanation. It asides that that’s just what all kids do, even the ones who are distinctly against the arts. Cluff & Lofing give the dominating point-of-view to one of the worst protagonists in found footage’s brief but extensive history, Ryan. He’s a lazy summation of camera culture, which is indeed full of lots of young people wanting to see the world through their cameras. But we aren’t at the point where everyone wants to film, all the time.

As this movie proves with a little more slickness than others, found footage is a cheap way to get a scare (all puns intended). Cluff and Lofing are smart to this, using the darkness of their vague environments for unease, and camera zooms to create claustrophobia. It takes you into places you aren’t stoked about going into. Some unease is created in the process, though the ebb and flow of jump scares is too easy to adjust to. Logic is still not even a thought, but the movie works in little pieces. It doesn’t make The Gallows much of a film, but a setting, a haunted house with a few unexpected bumps. More specifically, a house haunted by idiocy that’s nothing more special than other haunted houses found on Netflix.

The Gallows is now in wide release.