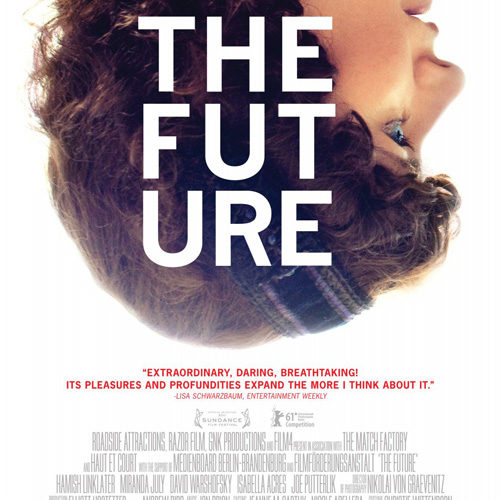 The Future, Miranda July‘s follow-up to 2005’s critically acclaimed, Me and You and Everyone We Know is aptly named. Much like the future, it turns out dim, cold, and not nearly as fulfilling as you’d like it to be.

Sophie (July, who also serves as writer/director) and Jason (Hamish Linklater) are in the midst of a relationship which has moved from fresh and exciting to comfortable and expected. This is reflected in their professions as well, as neither does anything truly fulfilling. They don’t even seem enjoyable.

Sophie is less a dance instructor and more a glorified babysitter, watching young, aspiring ballet dancers train by jumping up and down as if they were on a pogo stick as Sophie looks on. Her mood is not buoyed by the receptionist (Angela Trimbur) who bounces herself into a small-time YouTube dance sensation. Jason works from home, tethered to a headset, at the beck and call of any number of hapless computer customers. Who knew you could get paid for house arrest?

The couple recently rescued a cat that they referred to as “Paw Paw.” This information comes from Paw Paw herself, voiced by the tireless July in a cutesy, raspy whisper. She is the narrator for this film, in so far as explaining the story from her point of view as Sophie and Jason plan on taking this old, haggard cat in for a couple of months before it reaches its inevitable conclusion. A conclusion that the feline longs for. When they go to pick the cat up, it’s revealed that Paw Paw wouldn’t be ready for another month and that its lease on life could be longer than anticipated. Who knows how long something can survive when love and care are factored in?

This sudden revelation brings the couple to a crossroads: this cat could last into their forties. More importantly, they’re going to be forty. Like, tomorrow. So they dedicate the month to feeling the last bit of freedom they might ever enjoy before that little furball of responsibility signals the end of their youth, their hopes, their dreams.

Sophie decides that she will record one YouTube dance video per day for each day of the month. When her time in front of the camera comes, she is paralyzed with inaction, consumed with fear. She knocks over a drawing that Jason was guilted into purchasing while they were at the shelter. The artist’s number is on the back, just in case the buyer would like to return it. Sophie picks up the phone and begins to connect with Marshall (David Warshofsky), a suburban single father.

Meanwhile, Jason decides he will be open to the universe, letting it guide him through these thirty days. Someone asks him if he has a minute for the environment and he gives the organization not just a minute but another volunteer, donning a vest and going door-to-door to sell discounted trees to help the environment. The good act supersedes his nature to actually give reasons as to why people should go through with this deal. He eventually finds an older gentleman (Joe Putterlik) who has been married 40+ years, who gives Jason some matrimonial war stories.

It soon becomes clear that this entire exercise will find out if these two will enter the uncertain future with the other at their side.

At this film’s center is an intriguing question: when does comfort become a bad word? “The Future” works in its own logistical world (as if the narrating cat wasn’t a tip off), externalizing all manners of emotions, physically working through them. The comfort of an old t-shirt is used to envelop a person whole, as if that presence will make everything hurt less. When things get bad, someone literally keeps digging a hole they can’t get out of. Even time becomes paused, fighting off an undesirable situation, as if it will resolve itself it just doesn’t occur.

And that is what makes the execution of this film so bizarre to me. It’s all about feeling but it left me completely ambivalent. Everything is played at the same monotonous level. There are no peaks, no valleys, just sameness. Even though the characters ride a bumpy road it’s all played like a flat line. This is obviously the intent, which can be seen in the humor. It somehow removes itself even further back from a dry comedy and ends up arid and droll. As the film plods along, I couldn’t be less engaged.

This is a well-made film. The score from Jon Brion fits wonderfully with the subject material. A nice, simple visual style is used effectively. But the film was too clever to let me in. At the screening I attended, two people were laughing long and loud. Watching their reactions and trying to figure out what I was missing took over as my prime source of entertainment, as little was derived from the film itself. Maybe it’s a topic that I, at 25, have not experienced yet and cannot connect with. Maybe it just isn’t my sense of humor.

Towards the end of the film, July’s character declares, “I’m saying ‘OK’ to nothing.” I, however, cannot.