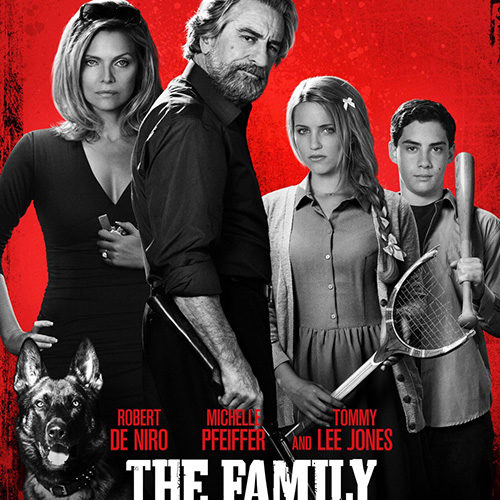 There’s no question that Luc Besson has a grasp on stylish thrillers. The French writer and director can claim responsibility for a few exceptional titles in this category, including La Femme Nikita, The Professional, and, more recently, the beatdown fest Taken. After decades of producing action-packed cinema – a job that he’ll continue to do, based on his connection to a number of planned Transporter sequels – he ventures into comedy with The Family, an experiment for which he appears poorly equipped. Based on the book Malavita by Tonino Benacquista, the film wastes no time indulging in Besson’s signature brand of violence as the story opens on a French family quietly eating dinner, only to become massacred by an anonymous, trench-coated assassin. Cut to the Blakes as they, under the cover of night, relocate to a small town outside Normandy. The decision isn’t a choice, as they rely on Witness Protection to hide them from the mafiosos that patriarch Fred (Robert De Niro), better known as the notorious gangster Giovanni Manzoni, ratted out years before — that the clan looks similar to the victims in the previous scenes also hints at their reason for moving. Frustrated with country life and beset by snooty neighbors, Fred, wife Maggie (Michelle Pfeiffer), teen daughter Belle (Glee’s Dianna Agron), and young son Warren (John D’Leo) soon unleash chaos in their bucolic new surroundings, all while a beaten down FBI agent (Tommy Lee Jones, in his standard Fugitive mode) tries to keep them in check.

Poking fun at wise guys was stale even before De Niro lampooned them in Analyze This, and The Family adds nothing fresh to the trend. Besson’s adeptness at portraying cold, unfeeling brutality works against him, as there are more than enough beatings, murders, and bombings supplied here, only many of them come off as far too graphic and disturbing to elicit anything close to laughter. During one tedious subplot involving brown tap water, Fred drags an unfortunate target onto a secluded road, and a close-up of the man’s terrified, bludgeoned face quickly veers the situation from humorous into uncomfortable. Even when bloodshed doesn’t occur, the jokes still fail. At one point, Warren alludes to the language of gangster films with a description of his dad’s masterfully versatile use of the word “f*ck,” which then becomes a very unfunny running gag throughout the rest of the film. The script, which was co-written by Besson and Michael Caleo, does manage to inject some redeemable traits in its characters. Fred receives the most development, courtesy of a memoir he painstakingly types in his cluttered greenhouse, but De Niro’s relaxed performance renders him colorless compared to the rest of the family. Pfeiffer plays Maggie as a housewife whose fits of rage are balanced by a zen-like philosophy toward food and home. While discussing the benefits of olive oil over the French-preferred butter, she purrs “Olive oil caresses the organs,” and it becomes a rare moment of pure warmth. One of the more interesting aspects of the film is the unorthodox relationship between the scheming Warren and the silent but deadly Belle, who, out of both love and necessity, display a sort of mature closeness. “What do you first notice about a guy?” Warren asks as Belle eyes a handsome math teacher from across the school cafeteria. “His eyes,” she answers, and the exchange reveals an openness between them that exists with no one else, not even their parents.

By the third act, however, the effort to build three-dimensional beings out of clichés goes to hell when the enemy shows up (thanks to a elaborate coincidence involving a school newspaper and a wine bottle). As in previous scenes, the final epic showdown foregoes amusement for shock, as innocent bystanders are gunned down in the streets during the orgiastic shoot-out. Considering that many of the French victims had been portrayed earlier as stereotypically rude and critical, I wondered if I was supposed to laugh at their deaths. I also wondered if Besson was a self-hating French person. I pondered a lot of things, because I was bored.

Full of tone deaf humor and gratuitous violence, The Family marks a miscalculated step for an otherwise fine filmmaker. That the project was also executive produced by Martin Scorsese, one would expect a more insightfully clever take on a played out genre.

The Family is now in wide release.