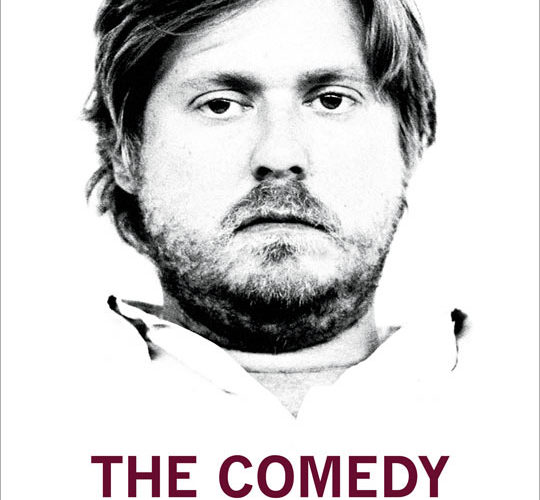 The Comedy is a title that works on two levels. The film itself contains the same kind of detached irony that lightly walks through the veins of the aimless Swanson (an excellent Tim Heidecker) and his friends. And while it certainly made me laugh, this is the exact opposite end of Paul Blart: Mall Cop the comedy taste spectrum. The Comedy is brutal, evocative, and personal. For example, Swanson will try to pick up a girl who asks if he’s a socialist. Eventually he ends up with Hitler: good ideas, poor implementation. The line works. This film is the next uncomfortable step away from The Office and Louie and Heidecker’s own Tim And Eric Awesome Show, Great Job!. Results will vary.

The other use of “comedy” is in the traditional, Dante’s Inferno kind of way, where we fallow a character through some form of transformation. I mean, Swanson just has to get better, right? The introduction features Swanson, lounging in a chair with a drink as his rich father rots away in an estate that could accommodate fiefs, graphically describing the horrible things an attending young male nurse has to do for his father. After the nurse inevitably walks out (but not before taking in a mountain of abuse), Swanson walks over to this father and stares at it, like one of the apes in 2001: A Space Odyssey, before tapping his father in the forehead. Knock knock, no one’s home. Meet our protagonist. He returns to his house boat, somewhere off Williamsburg in the East River, a perfect metaphor for this man so clearly set adrift. Rick Alverson directs this film as if it’s a scientific case study, focusing in on long, steady close-ups that go on for minutes. The form follows. Alverson and his co-writers Robert Donne and Colm O’Leary have a thesis: what is the logical end of ironic detachment? First, we see Swanson in his natural element, surrounded by like-minded manchildren Eric Wareheim (The Eric to Heidecker’s Tim), James Murphy (lead singer of LCD Soundsystem), and Gregg Turkington (Neil Hamburger). Their conversations make up a curious paradox: they don’t care about anything going around them, but boy do break a sweat creating a fake universe to play around in.See how quickly a short talk about true feelings can get mocked out of existence. But man, do those fake real estate talks work on a number of levels.

The film plays like a serious of blackouts, aided no doubt by the consistent stream of booze flowing through our hero. What else is a poor bored, rich boy to do? It would be easy to blame the liquid insulation and recent family troubles for Swanson’s pull back from reality. Too easy, frankly. When his sister-in-law arrives to suss out some some familial financial issues, Swanson can’t stop acting his emotional darkness out through an equally dark character: a slave owner. He mercilessly taunts her about how his older brother –her husband – is in a mental institution. Like a child, he’s close enough to feel the emotion, but he isn’t equipped with the skills to deal with it. Show me through the arch television character how you really feel.

If this is a case study, then Heidecker hanging out with his similarly-minded friends acts as a control. All of his other interactions with the outside world are a series of experiments. He seems fairly cognizant of the big, white coat he’s wearing. In one bit, Swanson picks up a shovel and acts as a day laborer if only to mess with some random, rich neighbors. He plants a bush and everything. When he mentions how all of his fellow workers wish to jump in the pool, to his surprise, the couple capitulates. He walks off in a huff. What’s with these people? Don’t they know what role they are supposed to play? This is especially true of Swanson’s relationship with women. He has sex with the girl he picked up in the opening paragraph and then spends a few minutes the next morning grabbing the connection of her eyelid and her eyebrow trying to wake her up. One wonders if it’s because he wants her out of he wants to ride the little boat back to the mainland riiiiight NOOOOOWWWW!! Lets not even discuss a sexual act. It seems like just another cog in the machinations of this life he’s floating along with.

Well, that would be too curt. He does have some ambition, but the oddest kind. Instead of fixing his sink on the boat, he gets a job as a dishwasher. He brushes his teeth every day before work. Gotta love a job with perks. While at “work,” he inadvertently runs into an admirer, a young waitress (Kate Lyn Sheil, putting in a vulnerable performance to match her turn in 2011’s Green). Their stifled relationship pushes the lengths of how much of an observer Swanson has become. It’s amazing how unsettling inaction can be.

Transportation is an ongoing motif. When Swanson zips to and from his houseboat in a small motorboat, even in the most dire emotional times, he still carries a childlike enthusiasm. He wears a small smile when drunkenly riding a subway. Hell, he’ll pay top dollar to experience life as a taxi driver. But when trouble comes, he ditches like he just rang a neighbor’s doorbell. He travels so much, he never seems to gets anywhere. Now that is comedy.

The Comedy is now in limited release and on VOD.