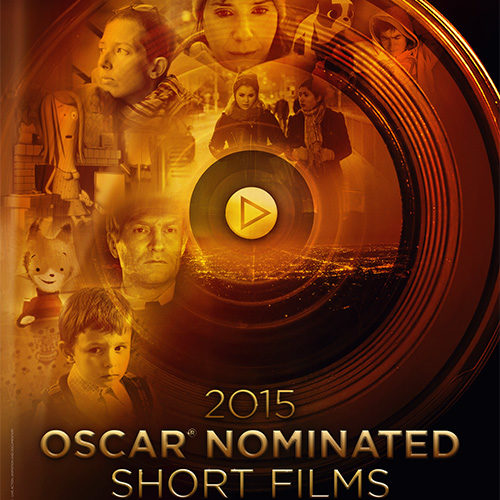 Ahead of the Academy Awards, we’re reviewing each short category. See the Animation section below and the other shorts sections here. This film is delightful. Not only does it have a catchy titular song playing throughout (a Happy Camper ditty featuring Pien Feith), but A Single Life also possesses a wonderfully simple premise in order for its paltry two-minute runtime to deliver so much more than you would expect. Enter a solitary woman readying for an evening alone with some pizza when a mysterious package containing a vinyl record with invaluable power arrives. The groove set underneath the needle isn’t merely a journey from beginning to end of the music it holds, though, it’s also a metaphorical depiction of the listener’s lifespan. A revelatory discovery for her and us, the inherent imperfection of its medium delivers some unforeseen consequences.

When I say medium I mean that of the vinyl from inside the short, not the cutesy form of computer animation Job, Joris & Marieke wield. No, the charm infused visuals that the Netherland trio utilizes would bring a smile to your face regardless of plot or comedy. The plasticity to the hyper-real caricature lends an air of collectable figurine whimsy only matched by the story’s inventive use of its time traveling gimmick. Every changed position of the record player’s arm transports us to a different point in the past or future of Pia’s life with her always found in the same position with something new placed in her hands to replace what might have been there previously. And every skipped transition remains in-sync with the music.

Job Roggeveen, Joris Oprins, and Marieke Blaauw could have taken their central conceit in many directions, but they thankfully took the avenue with the highest potential of laughter despite some probably finding the result unnecessarily dark in its humor. That doesn’t mean there aren’t also welcome flourishes of childhood memory or the joy of motherhood—it simply explains the boldness needed to take a joke to its logical completion with a cut to black you don’t think they’ll actually deliver until its punch line begins. We realize the stakes of what’s happening the exact second Pia does and that infinite moment of breathless suspense brilliantly concludes with the grandest laugh of all. As the song says: “The ending is inevitable.” It is indeed. Just when you thought the generic American tale of boy meets girl, boy loses girl, boy gets married, and boy and girl have children was officially exhausted, Disney finds a way to tell it from a fresh perspective: the dog. This is the gimmick behind the studio’s newest, almost completely silent, short film Feast—the story of which came from Nicole Mitchell and Raymond S. Persi before animator Patrick Osborne took the reins as writer/director. They ensure that it only takes one French fry to grow little Winston’s appetite for the “finer things in life” and assist him along the journey towards realizing what it means to be “man’s best friend”.

With a perfect aesthetic for 3D effects considering the amount of meatballs and Cheetos that fly through the air towards his always-open mouth, the animation harkens back to the 2D hand-drawn work of yesteryear similar to the Oscar-winning Paperman. The story is in large part about Winston’s owner and the life choices he makes over the years, but the vantage point is forever from the dog’s perspective at ground level. His emotions eventually play a role in how we as an audience are to understand what’s happening around him, but before this point it’s all about the food. Even though the fry alters his palette to know there’s more than kibble, it doesn’t stop him from eating it. At least until James’ leftovers prove too plentiful and delicious.

As the cuts take us through day after day, meal after meal, we begin to see environmental changes via the food found sitting in his bowl. In all honesty, I found myself so attuned to the dog that I missed the transitions of his owner in the background. Only after seeing Brussels sprouts land with a sprig of parsley—eaten with fervor before being spit out in disgust—was I jarred awake to notice there was more to this short than previously thought. The health kick meant a new girlfriend, the ice cream and pizza to follow a fresh depression. And through every evolutionary step the love Winston shows for the man filling his bowl remains to show a simple, gratifying, and mostly selfless life made real as he helps his master achieve the familial dream. Me and My Moulton – Canada/Norway – 14 minutes

An Oscar-winner for Best Animated Short in 2007 with The Danish Poet and nominated in 2000 for My Grandmother Ironed the King’s Shirts, writer/director Torill Kove returns to the medium with Me and My Moulton. It’s a brightly colored line drawing cartoon about a young girl and her family in Norway during the spring of 1967 that deals with themes of envy, embarrassment, and empathy to make it relatable for children and adults alike. We all go through phases of wanting to be just like everyone else and conversely completely original at some point in our lives. And whichever we hope to accomplish usually finds opposition—intentionally or not—very close to home.

For the seven-year old girl at the film’s center, those preventing her from being a “regular” kid in a “regular” family are her parents. She sees her best friend’s life in the apartment below her with a mother who stays home and makes snacks and a father who does yard work without a shirt before heading to military training as ideal. Her own mom and dad’s careers as contemporary architects make them stick out like sore thumbs instead. So she yearns for a generic living to escape from constantly being the people in their neighborhood that everyone knows and her solution—along with sisters aged five and seven—is to ask for a bike to both fit in and get away whenever necessary.

Her parents obviously find a way to ruin those plans. Rather than be a brat about it, however, the girl finds understanding and thanks. She improvises joy after realizing the perfection she believed in may not have been as perfect as what she has. Kove therefore injects some nice children’s book morality to the proceedings amidst humor (a three-legged chair gag is great) and artistry (I loved the translucency of the tree leaves to denote their lack of opaqueness even as a whole). The aesthetic is very much two-dimensional Flash animation-esque, but the content helps render any unfair thoughts about it not being Pixar-quality moot. There is a charm to the look that recalls stories from my own childhood—the simplicity of quality many forget in lieu of life-like animated spectacle. For once publicity jargon—namely “The Bigger Picture is quite simply the most innovative animated short you will see this year”—is backed up because this Oscar-nominated short is a stunning feat of mixed media animation. The subject matter is a downer considering it deals with two grown brothers one of whom cares for their mother and questions whether putting her in a home is better solution for her while the other hardly around screams about such thoughts as inhumane, but the aesthetic bringing their tale to life must be seen to be believed. Painted on the walls of a life-sized set with papier-mâché limbs protruding when necessary to interact with physical objects, the sheer scope of having to permanently paint over each composed frame before starting the next is impossible to imagine.

At first I wasn’t sure what I was seeing because it seemed so intense a process. A bag of groceries empties on the a kitchen counter with the man doing it (Christopher Nightingale‘s Nick) flat against the wall, effortlessly moving along the painted plaster to disprove my initially thought he was merely superimposed above it. An impressionistic car drives on the glass window and Richard (Alisdair Simpson) arrives, shifting past his brother so he is bisected atop a cupboard door before angering Nick enough to open said door and force the face that made him mad out of sight. Pouring water rains plastic onto the floor a la The LEGO Movie‘s translucent blocks doing the same; a vacuum cleaner literally sucks up an entire scene; and the lighting in night sequences looks like a Godfried Schalcken painting.

Director Daisy Jacobs has outdone herself visually and in the process has allowed my brain to push the plot she and Jennifer Majka wrote completely to the background. The heaviness of the situation and inevitable certainty of mankind needing to care for ailing, aging, and dying parents doesn’t help, but I became lost in its unique picture as opposed to the poignant message above it. Death looms large from the beginning with an underappreciated son belittled by the woman he’s sacrificed personal success to save and his high-flying, smooth-talking brother thinking about important things from a purely academic position until reality slaps him awake. You will need to watch twice to devote the focus integral to experiencing what’s happening, but in all honesty I’d have viewed it again to see the animation. Its story depth is a bonus. An inclusive metaphor, The Dam Keeper‘s young Pig is made to combat the darkness of adolescence spent as an outcast and the black ash threatening to consume his town unless he stays vigilant at the windmill dam where he lives and works. He’s the protector of all the animals below the wall, a child shouldering the responsibility of an adult in a way none of his peers can or want to understand. To them he is merely a dirty pig covered in soot, ignorant to the fact of his keeping that soot at bay so it will never touch them. Left alone to endure the rampant bullying unleashed upon him, the arrival of an outsider brings hope that change and understanding can occur.

Written and directed by Robert Kondo and Daisuke ‘Dice’ Tsutsumi, the story of their underappreciated Pig is brought to life in a rough, children’s book aesthetic of textured color fields without the need of thick outlines or edged delineations. It reminds me of the illustrations I’d see as a kid with a loose technique and cute characters populating a world much like mine. Beyond the desolation of their land getting ravaged by dust storms daily as though some warning of what’s to come via global warning, Tonko House, LLC personifies the animal kingdom for a family friendly appeal that grabs attention yet remains relatable. Allowing them to exist in a darker world of ridicule, vengeance, and empathy, however, is what sets it apart.

The Dam Keeper goes darker in tone than expected once the in-coming Fox befriends Pig like no one ever had. It’s such a common scene generally followed by the transformation from pariah to equal with some comeuppance for the bullies. Impressively, this isn’t how the direction they go. Instead this short gives us a moment of jealousy, rage, and betrayal—a perfect cocktail of “last straw” markers firmly planting Pig in sorrow while the smoke envelops them all. It’s an impulse we all feel, a yearning to make our oppressors walk in our shoes and know our plight. And in Pig’s anger comes the revelation things aren’t always what they seem. Because just as he trusts the gas mask to stave off the ash above, so too must he trust the kindness of his friend below.

The Oscar Nominated Shorts are now showing in limited theatrical release. See the official site for more details our reviews of the other shorts sections here.