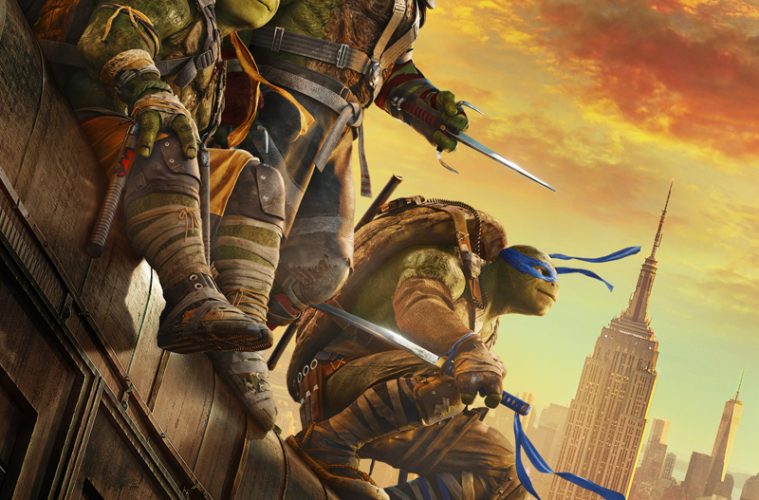 [Review] Teenage Mutant Ninja Turtles: Out of the Shadows

Teenage Mutant Ninja Turtles originated in 1984 as a self-published comic book by two guys in New Hampshire, intended as a one-off parody of Cerebus, New Mutants, and the work of Frank Miller. More than 30 years on, there have been multiple comic series, four TV show adaptations, numerous video games, countless toys, and now six movies. It’s a bona-fide cultural phenomenon. And yet all you have to do is recite the name to remind yourself that it was all intended as a joke. Nostalgia is a helluva thing.

Teenage Mutant Ninja Turtles: Out of the Shadows not only recognizes this, but directly exploits it. Nearly all the hallmarks of the 1987 TMNT cartoon (the biggest millennial touchstone for the franchise), are present here, including several that have never appeared in any of the theatrical films before. And this may indeed win over fans, going by the grown men at my screening who unabashedly cheered at the debuts of Bebop and Rocksteady (a warthog-man and a rhinoceros-man), Krang (a pink brain alien-thing who lives in a robot’s tummy), and the Technodrome (Krang’s Death Star ripoff warship). It’s a far cry from when news leaked that the filmmakers behind the 2014 film were considering making the eponymous turtles aliens, eliciting outrage in internet circles.

Will anyone else appreciate Out of the Shadows? Kids probably will, but they like everything and thus don’t count. But it’s surprisingly enjoyable even if you aren’t already in the bag for the turtles (something I can state authoritatively, having previously only seen the 1990 and 2007 films in passing). More than being fan service, the inclusion of alien tummy monsters and warthog-men makes for an agreeably goofy experience. The movie even goes for cartoon broke at times — in a fight scene in a plane’s cargo hold, the rhino-man is hit by an explosion and his head pops out of the aircraft’s underside. Delightful! Honestly, this is preferable in most cases to the hit-and-miss “witty” banter of the Marvel house style, even with the accompanying butt jokes and cringe-worthy faux-street talk from the turtles.

Even the motions of the film’s plot and character arcs are redolent of Saturday morning cartoons. The turtles — leader Leonardo (Pete Ploszek), hothead Raphael (Alan Ritchson), brainy Donatello (Jeremy Howard), and goofball Michelangelo (Noel Fisher) — are introduced with title cards bearing basically those same descriptors, and they repeatedly, vocally assert these qualities whenever they can. Before the climax, they pledge to work together as a team by affirming what each of them brings to the table. “Strategy!” “Logic!” “Improvisation!” It’s stupid and broad and thus utterly appropriate for the material.

Teamwork is, of course, the supposed theme of the movie (although how well the turtles work together tends to vary depending on the needs of the scene rather than any tangible character basis), along with the turtles struggling with staying in the shadows and never taking credit for their crimefighting work. No one really cares about this, though — not the filmmakers, and certainly not audiences. Look, in one corner are the turtles and their friends: Megan Fox as April O’Neil, Stephen Amell wearing a permanent shit-eating grin as Casey Jones, Will Arnett playing PG GOB Bluth as some guy. In the other corner are the bad guys — Bebop and Rocksteady (Gary Anthony Williams and pro wrestler Sheamus), Krang (Brad Garrett), the Shredder (Brian Tee), and Baxter Stockman (Tyler Perry, made to look like Neil deGrasse Tyson but sadly not acting like him, although his cackling mad scientist routine is wonderful). They fight. What else do you want?

I mean, I suppose you could want action accomplished with some flourish. That’s fair. The film delivers it haphazardly, with the level of skill generally in direct proportion to how much CGI is involved. When the turtles and their similarly animalistic foes are prominent, the camera floats more through the environment and lets the viewer appreciate what’s going on. This is reasonably fun, if hectic. Director Dave Green faithfully follows the Michael Bay gospel of insistent visual overload and an absolute refusal to ever slow down for too long. Sadly, he has no grasp on how to build properly. Krang’s introduction, for example, comes with severely underwhelming matter-of-factness. If you’re going to put an alien robot tummy on your cinema screen, have the decency to reveal him with aplomb, dammit.

Teenage Mutant Ninja Turtles: Out of the Shadows (SPOILER) does not, in fact, bring the teenage mutant ninja turtles out of the shadows. But though the film hardly shakes up its world’s status quo and leaves things clearly open for a sequel, even this oddly feels in spirit with old TV shows, in which no installment could be too conclusive. Lessons may be learned, but the bad guys always had to be able to come back another day. Since there are no outright cliffhangers or unaddressed plot threads, here too is a way that a silly movie about ninja turtles outdoes a good share of superhero fare. So how can I hold too much against it?

Teenage Mutant Ninja Turtles: Out of the Shadows opens nationwide on Friday, June 3.