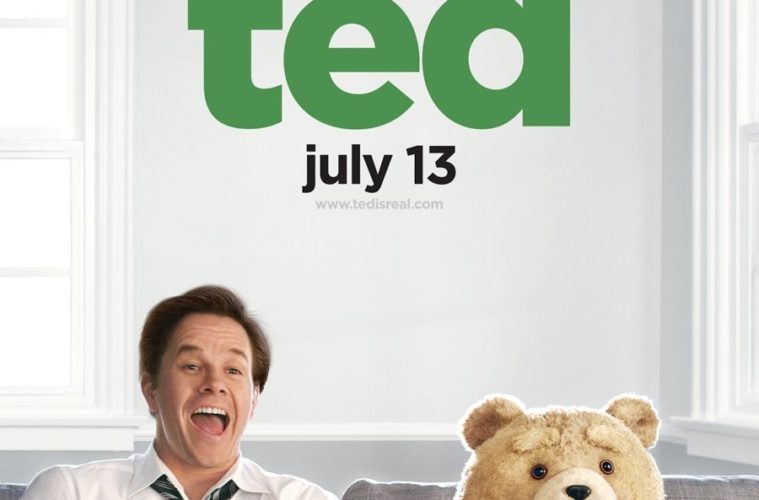 If you looked at the trailers for Seth MacFarlane‘s Ted and thought it would be a full-length, live action riff on his popular animated television show “Family Guy”, you wouldn’t be wrong. However, if your assumption also carried the thought such a result would end up overlong, obnoxious, and too weak to sustain its one-note joke, get ready to be pleasantly surprised. I won’t say this crude, R-rated fantasy about a teddy bear come to life will be for everyone, but MacFarlane and “Guy” team members Alec Sulkin and Wellesley Wild have definitely stuck with what they know. I don’t think shifting their formula to the big screen will sustain itself for multiple works, but utilizing it as a bridge to transition the comedian into the Hollywood machine does prove a low-risk maneuver for someone with his established audience. Fans should love this film as a result. MacFarlane introduces us to the work as though it will be a Christmas tale for children to watch ad nauseam each year. Patrick Stewart‘s deeply accented voice narrates us into the Boston suburb of young John Bennett on the day that will indelibly change his life. A lonely child the neighborhood punching bag doesn’t even want to consort with, it’s the unwrapped plush bear under his Christmas tree that becomes his first friend. With a high-pitched “I love you” emanating from its belly when squeezed, it’s no surprise watching the impressionable boy nestle into bed with a wish to bring his stuffed animal to life. And like these fantastical tales of imaginary friends go, the morning manifests its miracle with a heartfelt embrace. The only difference here is that Ted is very much real.

Unlike Brian the dog in “Family Guy”, MacFarlane can’t brush off a talking bear by flippantly remarking he’s a cartoon. So, rather than ignore the elephant in the room, he opens the floodgates by exposing the walking, talking toy to the entire world. Hailed by evangelicals as Jesus’ handiwork, invited to guest on “The Tonight Show Starring Johnny Carson”, and forever by John’s (Mark Wahlberg) side, Ted (MacFarlane) becomes the kind of disposable overnight sensation we all love to watch implode. The premise is therefore brilliantly cemented in a way that renders audiences unable to question the central conceit since they’ve already accepted the impossible as fact. By the time we gain our footing after a credit sequence montaging their formidable years, the novelty has already died. With Ted just one more layabout mooching off a childhood buddy, the film can officially begin.

Lacking in the realm of original plotting, any shortcomings are tempered by MacFarlane’s penchant for absurd situations. John and girlfriend Lori (Mila Kunis) are trying to reconcile a four-year relationship riddled with immaturity on behalf of his now thirty-five year old man sleeping with a doll whenever it thunders, so their many starts, stops, and second chances do put a strain on our patience. And while easy comedy results through John’s oblivious manager (Matt Walsh), aloof coworker (Patrick Warburton), and Lori’s chauvinistic boss’s relentless attempts to woo her (Joel McHale), these gags can’t compare with the very “Guy”-esque interludes of Saturday Night Fever escapades that will have you on the floor laughing. At the end of the day, we don’t need the lovebirds to stay together. We came for the John and Ted show and the screenwriters thankfully understand. Besides a looming conflict courtesy of deranged fan Donny (the ever-creepy Giovanni Ribisi) and his unfortunate son Robert (Aedin Mincks), the rest of the movie is a series of hilarious events helped by drug use or simply byproducts of the characters’ bottomless wealth of stupidity. Bear on human fisticuffs rival the Peter Griffin versus chicken brawls we know and love; an infatuation with Flash Gordon infiltrates the proceedings stylistically through copycat camerawork while also bringing Sam J. Jones himself to the fray with a bag of cocaine and an acceptance of his cult status; and Jessica Barth gets sodomized by a parsnip. Ted quickly crosses the line from cute, cuddly bear to vulgar, sexist, racist with an early bong hit and almost makes you forget he’s a toy through a never-ending barrage of sarcastically biting one-liners college kids will be repeating for months to come.

But this is the genius of MacFarlane’s accomplishment. We buy Ted’s existence and allow the film to continue as though nothing is amiss. Only the inclusion of Ribisi and Mincks tests the boundaries of the underlying magical wish, letting everything culminate in a display of love generally left to PG-fare yet still genuine courtesy of Wahlberg’s over-wrought dramatics. Marky Mark has grown on me over the years as far as being a well-rounded actor goes, but I never denied his talent at self-deprecating humor. His willingness to cower in fear when faced with inclement weather or stray fecal matter is a hoot and watching him randomly smack people in the face while partying with Flash Gordon only adds to the appeal. The chemistry he shares with MacFarlane is solid and we believe their bond is powerful enough to drag him away from the love of his life.

Kunis and a large supporting cast sprinkled with some surprise gems fit the farce perfectly as all seem to be having a great time. The computer effects on Ted are seamless even during the absurd fighting scenes and every joke shows how much MacFarlane holds back on network television. At the end of the day, though, no matter what success Ted finds, it’s still a first step. The comedian has proven his shtick works on the big screen; fearlessly lambasts whomever he can—sorry Susan Boyle and Garfield; and never pretends the work is more than dumb fun. I’d love to see his next script strip away the “Family Guy” crutches even more so his sensibilities are laid bare to take us where we’ve never comedically been before. I think he has it in him and I look forward to finding out if I’m right.