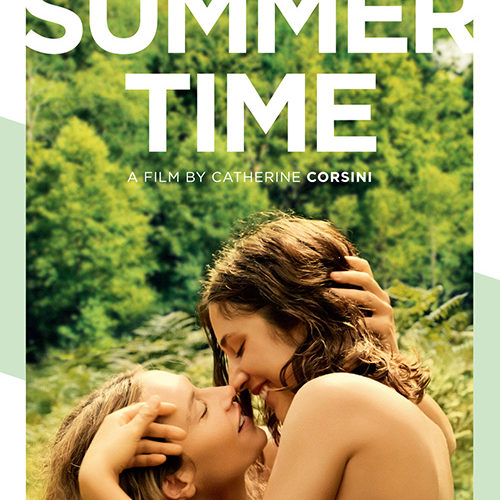 While a romance on its surface, Catherine Corsini‘s Summertime is really about freedom. The central relationship between Delphine (Izïa Higelin) and Carole (Cécile De France) pushes them to discover their personal identities removed from any union. The former is a farm girl yearning to break from the conservative mentality a future in the country dictates while the latter’s anti-bourgeois feminist Parisian cohabits with a long-term boyfriend equally political and militantly idealistic as she. They’ve each cut trails through the rigid social norms of the environments where they reside, crossing paths during the summer of 1971 by destiny’s hand. This collision ultimately evolves who they are and forces them to acknowledge how far they’re willing to go towards becoming the women they were meant to be.

Delphine is the main character despite Higelin’s second billing and ultimately the one Corsini admits is most like herself. She’s worked on her parents’ (Jean-Herni Compère‘s Maurice and Noèmie Lvovsky‘s Monique) cow farm since she was old enough to walk and has been attracted to women since her first kiss. She’s endured talk of marriage with neighboring farm-boy Antoine (Kévin Azaïs) despite sneaking off for evening trysts with her girlfriend because it appeases her folks. Whereas Delphine felt their love was real, her partner gave into the pressure to move forward as a wife. Lost, heart-broken, and frustrated to think she may one day need to do the same, Delphine finally leaves home for Paris to experience what big city life has to offer. It’s there she meets Carole and her “wild” group of activists seeking to stop prejudices women face everyday. Their convergence is funny and poignant, the girls pinching the butts of unsuspecting men walking down the street to make sure they understand what it is they seemingly have no problem doing to anonymous women themselves. Delphine proves Carole’s brave knight, using her blue-collar sensibilities to get in an aggressive man’s face that has proceeded to accost the latter attempting to run away. The country girl takes a shine to the intellectual and political rhetoric this committee spouts, becoming active herself in the fight for abortion rights and gay rights without regard for the inevitable consequences. They’re doing what they know is necessary as the world struggles to catch up.

Lust turns to love and the romance promised blossoms in time for Delphine’s father to fall ill. She returns to run the farm in his absence, embracing the feminist teachings of Paris to put herself on equal footing with the male-dominated co-op while reverting to the ingrained fear of hiding her sexuality. When Carole arrives Delphine can’t help pushing her away publically while also lying to her mother. Her dream as a child was to run the farm, the prospect of needing a husband to do so gradually growing. Finding and cultivating actual love wasn’t something she was sure could happen and yet here she was with both. The knowledge that being outed as a lesbian would risk that dream, however, was too strong to instantly ignore. Carole is shown to be the free spirit from the beginning even if she doesn’t know exactly who she is yet. Love changes her identity, but not her ideals. This is something that her boyfriend Manuel (Benjamin Bellecour) seeks to point out in a bid to keep her from going. His feelings for her remain unchanged despite his jealousy finding the room for anger and disappointment. Whereas any film with a male protagonist leaving his wife for a mistress would have the scorned woman relegated to clichéd stereotype, Corsini and co-writer Laurette Polmanss allow him to be real. The two engage in relevant if emotional discourse, their strength in their convictions never wavering. Unlike chauvinists wanting to oppress women, the feminist cause here seeks equality.

The same can be said of their handling of Antoine. The men in Summertime are colored with dignity in their disappointment, something a lesser film may have ignored in search of an agenda. And that’s the beauty of what Corsini has done — she crafts a resonant, relatable story around an important historical movement with authenticity that refuses to talk down to any side of the equation. The men may be obstacles and integral adversarial forces the plot needs to earn its weight, but that doesn’t mean they have to be two-dimensional. They are as real as Delphine and Carole, something male filmmakers should take note of the next time they look to caricature in order for their macho leads to seem justified in their decisions.

Delphine and Carole’s actions concern no one but themselves. This is the brilliant message that ultimately finds its way to us when the suffering experienced from trying to hide the truth can no longer be endured. What the other farmers think is only important because Delphine believes it’s so. It’s her fear that must be overcome, not their prejudices. Carole goes through the same thing at the start of their affair, uncertain where the line is between lesbian rights and being lesbian because of personal hang-ups. It takes her a long time to discern whether what she craved was lust or love. Who we are as people is never a black and white issue; we constantly fight with the desire to be accepted against our hope for happiness.

Corsini portrays this struggle beautifully by integrating Carole with the farm as a bright beacon of light and life. Her dynamic with Delphine’s mother is profound in the latter’s rejuvenation, her feelings towards this newcomer cruelly reversing once the truth is revealed. It’s hard not to see De France and Lvovsky’s infectious smiles when the climax delivers violent scowls. These two are the dueling forces pressing upon Higelin’s Delphine. It’s old world versus new, family versus love, and security versus freedom. In the end, making a choice is impossible. Both have such a major hold on her that removing one is removing a piece of her soul. Summertime understands this and wears its complexities as a badge of honor. We truly can’t love another until we love ourselves.