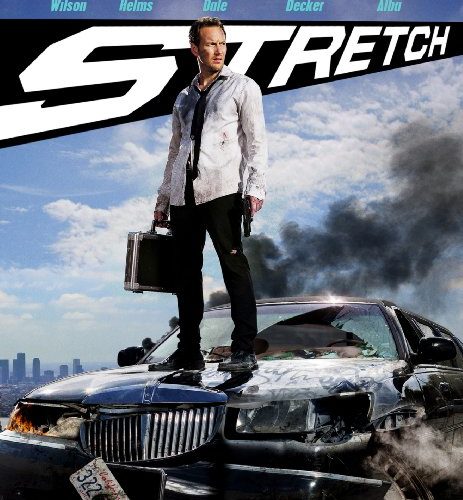 In the 16 or so years that he’s been in the game, filmmaker Joe Carnahan has built his reputation as much on the films he has made as he has on the ones he has not. A very vocal presence online and in the press, Carnahan is equal parts Hollywood studio cautionary tale and creative crusader. His new picture, Stretch, was scheduled to come out in theaters March 21st, only to be pulled by distributer Universal months before release, claiming the film was not worth the money it would take to put it out on the big screen. Now it finds its way to the masses via Video On Demand, a distribution model that’s far less inauspicious then it once was.

And though, on paper, Stretch has the makings of an alternative, studio hit – given it’s slick look and jam-packed, all-star cast – one understands the reservations having watched it through. Take note, this is mostly a positive.

Anchored to a very simple plot that escalates throughout, Carnahan’s new film (which he wrote and directed, with story credits from Jerry Corley and Rob Rose) is a hedonistic, late-night romp through Los Angeles that takes its cues from Martin Scorsese’s After Hours. A limo-driving loser named Kevin Stretch (Patrick Wilson) is given until midnight to pay off $6,000 in gambling debts to very dangerous people, and has no options. Until his flirty dispatcher (Jessica Alba, having fun here), hooks him up with an insane gazillionaire (Chris Pine, being insane here) who tips in the thousands.

The majority of the 94-minute running time is spent digging into the debauchery Stretch must survive in order to earn that hefty tip. Ed Helms puts in a funny little turn as Stretch’s devil-on-the-shoulder, peppered in just enough to land a few punchlines and not enough to become annoying. This is type of move that is destined to be devoured in college campuses for years to come, full of zesty dialogue and ultra-violence, also attributed to an early Norman Reedus cameo.

Some characters are given the short stick, especially Brooklyn Decker as Stretch’s ex-girlfriend. The actress is introduced early on and posited to serve as some sort of catalyst for our lead, but it never comes together. But then Carnahan seems less concerned with making sense than he is with having fun, sometimes relying a bit too heavily on voice-over to keep those watching in the know. This marks Carnahan’s sixth feature, and in many ways feels like the fitting end to his Gonzo Trilogy, following his debut indie Blood, Guts, Bullets and Octane and Smokin’ Aces.

Thankfully, this film vastly improves on what has come before. Between this and The Grey, Carnahan seems to be finding a stride outside of Hollywood that’s exciting to watch.

Stretch is now available on VOD. Watch a red band trailer above.