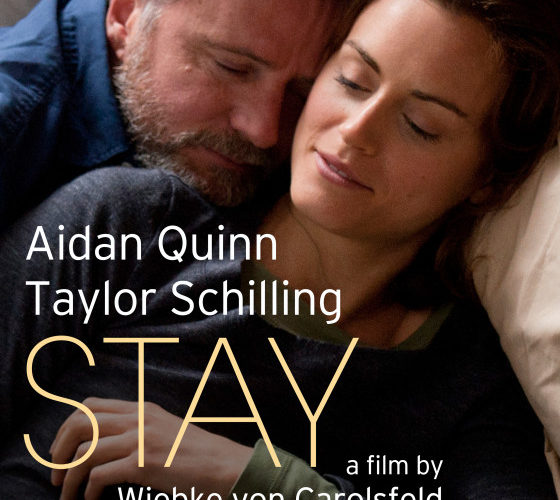 A little too on the nose, Stay, directed by Wiebke von Carolsfeld (best known for her work as an editor) is a romantic drama rich in atmosphere. Starring Taylor Schilling as Abby, a Canadian backpacker who finds herself in a small Irish countryside village, in a relationship with disgraced professor, Dermot (played by Aidan Quinn). While we’re never quite given the pieces of this relationship we assume Abby had just been passing through and became comfortable with Dermot, a casual fling for the eventual Eat, Pray, Love-style memoir she’s authoring. Unfortunately, things become serious, she misses her period and for Dermot, it’s becomes a reminder of things past — a fling he once had with a student that, needless to say, ended with his exile. Von Carolsfeld infuses the drama with all the beauty one would expect from a film taking place on the Irish countryside. A top-notch cast adds subtle notes to a less subtle script, especially as Abby learns she is pregnant and returns to Dublin to first discuss the matter with her geographically closest friend. Both Abby and Dermot question the very nature of their relationship and the maturity required to proceed; Dermot takes a young wayward lad, Sean (Barry Keoghan) under his wing and befriends Deirdre (Nika McGuigan), a single mom. Meanwhile, back in Montréal, Abby fears, as all women do, that she will turn into her own mother (whom we believe to have abandoned Abby and her father for a fling). Michael Ironside plays her father, whom encourages her to essentially stop solving her problems by remaining in motion.

Stay has tremendous moments of tenderness along with lighter moments of humor that cut the tension. These come in the form of subplots as Quinn discovers a relic on adjoining land and joins forces with a former colleague to dig it up. All and all, I admired much of Stay, even if the dialogue seemed better suited for the Lifetime Network, but at least the performances and atmosphere are rich enough for primetime. The film’s pacing and rhythm in large part work, even if certain elements feel inorganic. Adapted from a novel (I have not read) by Aislinn Hunter, I assume von Carolsfeld’s admiration for the source material may have complicated her screenplay. Try as it does, Stay remains an awkward near miss with too often what should be subtext is front and center.

Stay is now on VOD and in theaters in New York and LA. See the trailer above.