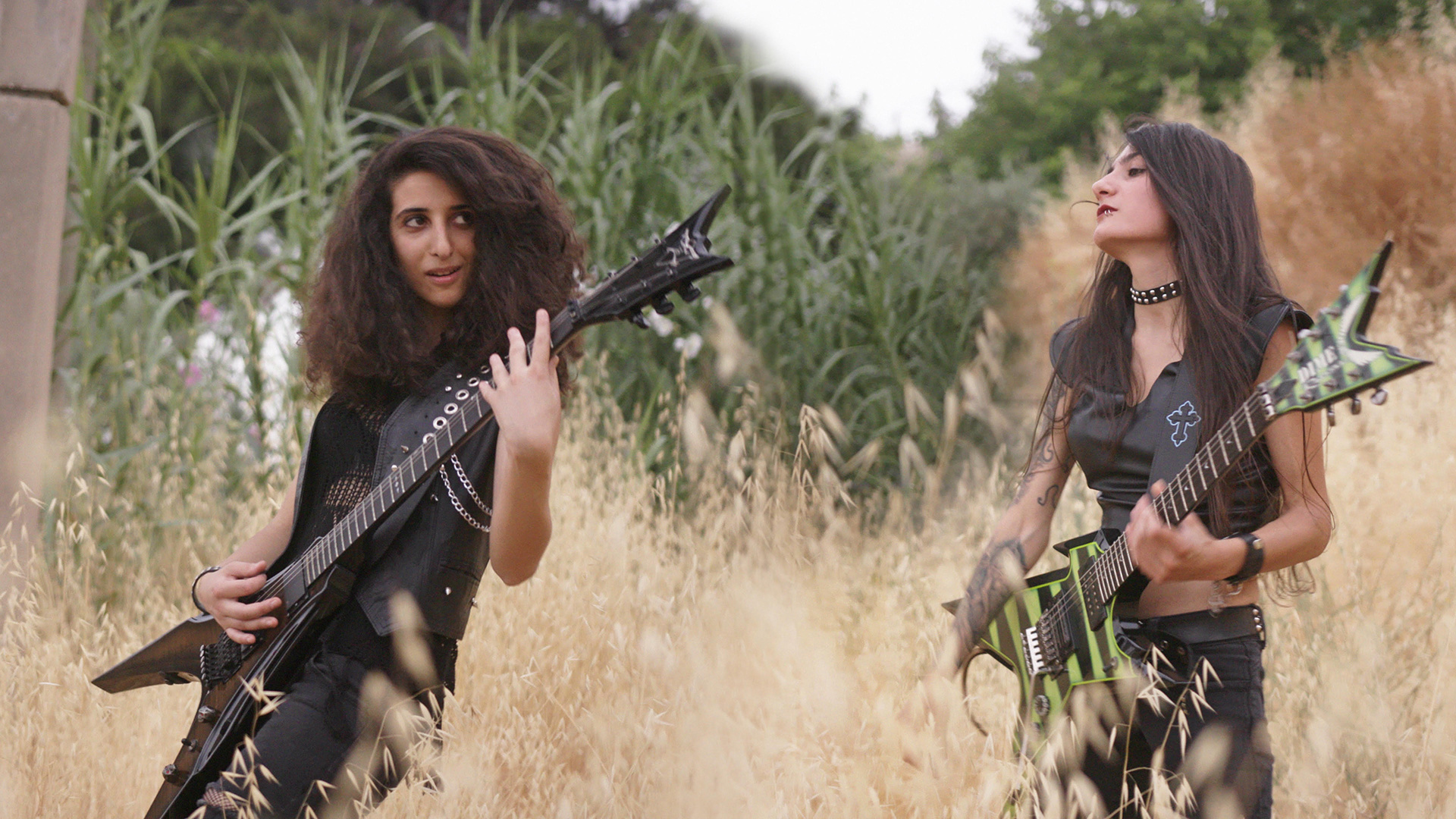 While Rita Baghdadi’s documentary Sirens centers upon the first all-female thrash metal band from the Middle East, it’s not really about the band. We follow them to a gig at Glastonbury, watch rehearsal sessions, and peek in on photoshoots, but the focus goes deeper than music. It reaches past the usual rock clichés to recognize that the struggle these women face is more immediate than striving to perform for sold-out crowds or become signed by a label. This is about surviving a chaotic environment marked by past violence while still entrenched in present-day political revolution; lead and rhythm guitarists Shery Bechara and Lilas Mayassi (respectively) wonder aloud if freedom of expression truly exists in their hometown of Beirut. If not, they hope it still can.

And it starts with them. To a certain extent they are Slave to Sirens: they met at a riot, found they shared a passion for the genre, and quickly became best friends. Does calling them the driving force behind the band probably diminish the roles of vocalist Maya Khairallah, bassist Alma Dougmani, and percussionist Tatyana Boughaba? Sure. Where Baghdadi’s film is concerned, however, Shery and Lilas are the legs on which the whole sits. It’s why growing animosity between them risks dissolving all their hard work, why the others are desperate to get them to hash out what’s going on so they can all move forward together. To do that means recognizing fault. It demands introspection and a desire to listen—also to speak.

That’s easier said than done in Lebanon: an article in their penal code states sexual relations that “contradict the laws of nature” are prohibited under the penalty of up to one year in prison. Is it a specifically anti-LGBTQ law? No. Does the nation treat it like one considering some statistics hold that 85% of the population is opposed to homosexuality? Yes. So while the penalty is apparently rarely enforced to punish those engaged in same-sex relationships, the ability to live openly within society is all but impossible. What does Lilas thus do upon getting close with Shery, only to discover an attraction that would put a target on her back? She pushes her away. She overcompensates with cruelty while exploring those feelings outside Lebanon’s borders.

It drives a wedge into their friendship and, by extension, the band. Rather than simply deliver a Behind the Music-esque, interview-based dissection of that tension, Baghdadi skillfully, artistically pulls away from the superficial drama so she can zoom into the personal impact of what losing this collaborative outlet means for existing within a world stacked against them. By cross-cutting footage of these women’s lives with scenes from Beirut’s streets (including the devastating port explosion on August 4, 2020), the historical backdrop becomes a means of enhancing the growing internal conflict that finally reaches its breaking point with Shery quitting the band. It’s a slowly building volcano of repression, guilt, and rage that can only be fixed by acknowledging something has definitely changed between them.

But don’t expect some crazy influx of fireworks. As stated above, Baghdadi is less interested in the band’s fate than that of these women trying to find themselves through the art its formation has helped create. Sirens is conversely a very quiet, contemplative film. In traveling through brief vignettes of Lilas and Shery’s lives with intimacy, it demands an insane amount of trust to capture the vulnerability and subtext that drives their surface actions. How do you choose between love and life? How can you separate personal from professional when the latter is intrinsically intertwined with the former? These are difficult questions without objective answers. You can only make your choice and hope there’s time to fix any mistakes.

There’s a poetic nature to the whole, too: Baghdadi avoids strict narrative plotting for emotional through lines. She shows just enough via expressions, body language, and actions to understand motivations and attitudes without explicit dialogue spelling everything out. When Lilas’ online girlfriend comes to visit from Syria, her place in the story goes beyond romance. More time is spent on Lilas’ stressful maneuverings to keep the reality of their relationship a secret from her mother than the joyous nature of them swimming at the beach. When Shery finally has enough of Lilas’ constant needling and aggression, she doesn’t sit in front of the camera to explain her side. She simply makes her decision. And watching Lilas’ reaction in the aftermath says everything words ever could.

That expressionistic propulsion allows the characters to drive things forward. How do they react? Adapt? Reunite? Music may have been the starting point of Lilas and Shery’s shared adventure together, but it’s not what binds them. There’s a kinship that maybe could have blossomed into more if not for the world in which they were born. (Baghdadi does well to keep specific details of their relationship vague so we can just see them as complex, flawed human beings trying to live their lives rather than putting them in reductive boxes such as “jilted lover,” or whatever other stereotypical label audiences like to foist upon women.) To throw it away isn’t something Shery takes lightly when quitting, nor Lilas when looking inward to repair the fracture.

As Baghdadi states in press notes, her goal was to present these women as “human, full of dreams, and fueled by desire,” as she had too long endured an industry diminishing the MENA region as little more than the origin of cinematic terrorists. Lilas, Shery, and the others are the strong, independent generation that can hopefully flip the script through their music and activism as positive role models for the next. It’s why we see a press conference held by a different band fighting to have their voices heard once this supposedly “free country” censors their ability to speak via concert. It’s also, maybe, why Slave to Sirens stays despite telling us they’re unsure whether Lebanon has a future. With their spirit, it still might.

Sirens opens at the Laemmle Royal in Los Angeles on October 7 before expanding nationwide.