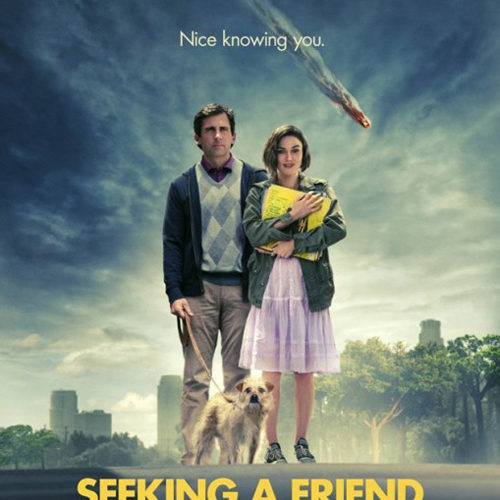 [Review] Seeking a Friend For the End of the World

Though Steve Carell may be one of the funniest, most likable actors working today, in his past few features, and certainly his latest, Seeking a Friend for the End of the World, he has a created a new film archetype: The Sad Insurance Salesman. This character is usually a male in mid-life crisis who’s got a wife who’s cheating on him thanks to his general boredom and lack of excitement. He’s not a bad guy, just not a particularly interesting guy. This sentiment, in many ways, defines Lorene Scafaria‘s directoral debut as a whole: nice enough at parts but, in the end, unsatisfying and lacking chemistry or much excitement. With an asteroid hurdling towards Earth, death is inevitable. Dodge (Steve Carell), a timid insurance salesman who does not take a lot of risks, is abandoned by his wife (Nancy Carell, Carell’s real-life wife), who doesn’t want to spend her last days on Earth with him. Her exit is marked with The Beach Boys’ “Wouldn’t it Be Nice” playing over the radio, a stylistic touch that, while largely unoriginal, does the trick here.

Dodge still shows up to work everyday, despite the fact that most of his co-workers have jumped ship. Here is a man who won’t step out of his comfort zone and enjoy life, even as all existence on Earth is about to end. Dodge doesn’t want to face the end alone, but he also doesn’t want to be promiscuous, despite the advice of his friends (Rob Corddry and Patton Oswalt, both criminally underused). Instead, he first seeks solace in a dog that has been abandoned by its owner, naming it dog Sorry, a painful introduction to the blatant symbolism ahead. One night, Dodge meets Penny (Keira Knightley), a fellow lonely tenant in his apartment building. Penny is deeply unhappy with her relationship to a penniless musician (Adam Brody). She breaks up with him, and her and Dodge find solace in their mutual loneliness. Unlike Dodge, Penny is spontaneous and positive. She also carries around her baggage from the past: a collection of records, without a record player to play it on. Penny’s collection, which includes Leonard Cohen and Lou Reed, is given too much weight in the film, complete with a contrived discussion on the importance of vinyl.

The film soon becomes a road movie with two separate goals: Dodge wants to spend his last days with his childhood sweetheart, and he promises Penny a plane that will take her to England to see her parents. Unfortunately, one goal seems to be completely forgotten while the other becomes completely unnecessary. As their relationship is the main crux, Carell and Knightley are underwhelming together. While Carell’s stretching himself as the straight man (akin to Dan in Real Life), Knightley doesn’t settle well to the comedic potential of her character. Her role would have been much better suited to Gillian Jacobs, the Community M.V.P. who shines here in a minor role as a waitress who lives too close to the edge. She displays all of the zany energy that would have made Penny as impressionable a character as she’s clearly meant to be.

For a movie about a meteor hitting Earth, Seeking a Friend ends more with a whimper than with a bang. Because of this lack of chemistry between our two leads, the finale doesn’t hit the overwhelming emotional note it’s clearly going for. Every conflict plays out in an anti-climatic matter, and not the kind that skewers your expectations for the best. Similar to Scafaria’s last writing project, Nick and Norah’s Infinite Playlist, this debut would have been better suited as a straight-up comedy sprinkled with poignant moments throughout. For a look at humanity with typical societal constraints removed, oftentimes comedy is the most truthful way to examine mankind.

Seeking a Friend For the End of the World hits wide release on Friday, June 22nd.