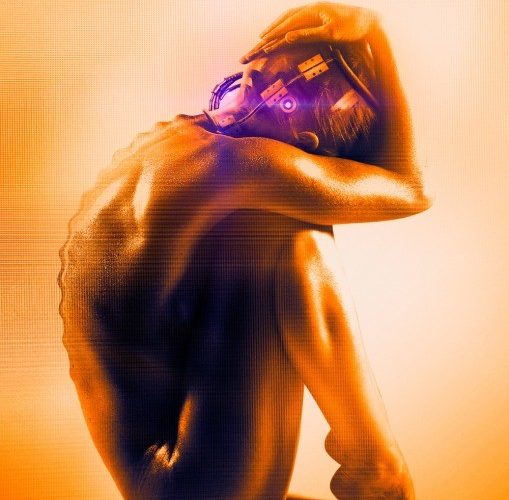 It’s taken ten years, but Secretary director Steven Shainberg has finally followed-up Fur: An Imaginary Portrait of Diane Arbus. The result is Rupture, a body horror-lite tale about a woman held captive as part of an experiment meant to unlock humanity’s hidden potential to evolve beyond our current state. Written by Brian Nelson (the two share story credit), its script seeks to mess with our expectations as it does its prisoner Renee (Noomi Rapace). We’re to cultivate a sense of paranoia with surveillance dominating the first act to a point where we must scratch our heads at act two’s distinct lack of it to facilitate Renee’s actions. Is this shift an unfortunate plot-hole or merely deflection to distract us? Is it hallucination or reality, trick or mistake?

These are the questions we should ask because they allow us to dig deeper into the events surrounding this unsuspecting victim of what’s obviously far from a random attack. And while we do ask, it’s hard to pretend we believe any of it is more than plot-hole considering how little we know. What results is a case of less being less—two thirds of the film keeping us in the dark to hear the same veiled bits and pieces over and over again, numbing us from staying sharp enough to care when answers arrive (via a wordy intervention towards the end that’s akin to a Bond villain laying out his dastardly plan so as to inevitably lose). Suspense moves to boredom, boredom to frustration, and frustration to ambivalence. Don’t get me wrong: there are some interesting themes about motherhood, fear, and emotions as a deterrent from unlocking one’s full potential. The problem is that these are pushed to the background for about an hour wherein our focus shifts to survival. The science fiction and horror aspects become secondary to Renee’s fortitude to slip her restraints and escape her unknown locale. She doesn’t care what’s happening or crave understanding right now. Would you? Her sole motivation is to return home to her son, maybe release other prisoners she meets along the way, and hope the police can put a stop to the kidnapping before the perpetrators come knocking at her door again. We therefore invest in that escape, forced to ignore the bigger question of G-10-12-X.

This is the film’s mistake because that’s the more intriguing detail. We’ve seen countless examples of someone trapped against her will, desperate for freedom. What we haven’t experienced are these specific characters serving as Renee’s captors. Besides the scene chewing of Peter Stormare, clinical precision of Michael Chiklis and Kerry Bishé, and tempered excitement of Ari Millen and Lesley Manville‘s doctors, there’s the off-putting yearning by all to touch Renee’s skin. They caress her cheek with theirs in a way that can’t help but get your brain whirring. Then comes the notion of fear as a catalyst for change—moving beyond death into rebirth. It’s all inherently captivating in a Doctor Who villain-of-the-week sort of way. Only we don’t get the acerbic wit to entertain in the meantime. Instead it’s Rapace refusing to give in. It’s voices from the next room, whispers from the hall, and an unguarded ventilation system providing access throughout the warehouse where these strangers work. Your pulse will pump as the things she sees foreshadow what they might do to her next, but what would be the benefit of her success? We’ll cheer in the moment and become sad the next because we never discovered what’s going on. So what if Chiklis asks prying questions to which he already knows the answers? It’s a means for us to know what he does. So what if they find out Renee is afraid of spiders? We remember the freak out she had in the opening scene. So much wasted time is spent on minutiae.

Sadly only a fraction is devoted to the web ensnaring Renee. I forgot Stormare was even in the film because the gap between his first and second appearance is huge. I couldn’t see these robotic weirdoes as more than two-dimensional blockades standing in Renee’s way because their motivations are shrouded in secrecy far too long. But they’re why we should be watching, not the prisoner. She’s merely the device necessary for the plot to reveal itself and the film assumes we won’t realize this. But as soon as we do the game is up because her panic is much less interesting than their calm. Lines like their having the power to cure Renee’s son of his volatile temper are rendered throwaway tactics rather than keys to the puzzle. Because there is a puzzle that could be introduced and solved in about thirty-to-forty minutes, the rest of the current runtime excised without losing coherency. Those thirty-to-forty minutes are successful at what they do too. The rest would also be good if the film was about Renee’s capture and not the experiment. Good doesn’t always mean effective and this proves why. The filmmakers should have focused upon the juxtaposition of Rapace’s emotions and the others lack thereof. It should do more to contextualize her son Evan’s (Percy Hynes White) emotional outburst to the larger web considering he’s absent from the screen longer than Stormare. And the reason for the skin fetish needs more substance than providing a visceral reaction—it tries, but even that arrives as though afterthought.

In other words: everything I liked about Rupture is half-cooked and rushed to conclusion. Metaphor and psychology is pushed aside for a generic quest of action and survival that is born from that metaphor and psychology. The underlying motives are buried so far beneath the surface conventions that they might as well not be there. It’s a real disappointment because the ideas we can glean have value if only they were given some room to breathe. Let Renee discover answers instead of being told them when convenient for the script to move towards its forced epilogue. Give us a reason for this evolutionary leap beyond answering why a random group of people is kidnapping innocent civilians. Its commendable promise of dystopian future by way of genetics is squandered.