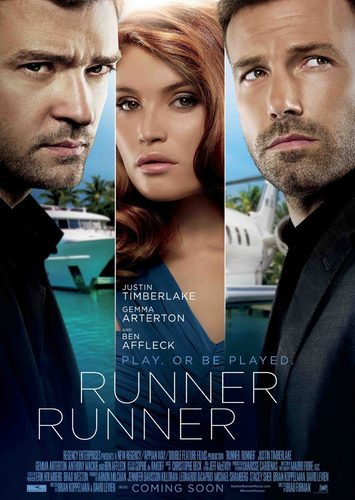 Runner Runner is one of those movies that plays like it was based off its own trailer. Maybe director Brad Furman (The Lincoln Lawyer) and writing team Brian Koppelman and David Levien didn’t actually shoot a series of disconnected, pulpy clichés and then dream up the online gambling premise to hold it all together. It doesn’t really matter though, because watching Runner Runner makes one think that’s exactly what they did. It’s easy to be suspicious when the movie begins with the ins-and-outs of the gambling operation, yet finds its pivotal scene with Ben Affleck covering his enemies in chicken fat and dumping them in a gator pit in Costa Rica.

Runner’s hand was played-out before it even sat down at the table; a mix of B-movie standbys and hoary thriller conventions is thoroughly smothered by a trite, routine story of a well-meaning guy seduced by the allure of a criminal underworld. There’s no good reason that online gambling even really factor into the tale, other than the need for Levien and Koppelman to provide Runner Runner with a repetitious gimmick that can stand in for real development or intrigue. That Justin Timberlake’s Richie Furst tries to fund his Princeton tuition by getting involved with online gambling is almost incidental to everything that happens after; it merely explains the details of how a fallen rich-kid college student ends up in the orbit of a wolfish mogul like Ben Affleck’s Ivan Block, who runs his gambling empire from a lush and convenient Costa Rican enclave. To attempt to explain the plot is to rouse the ghosts of better movies, including the likes of Wall Street, Rounders, and The Firm. Be assured that all of the cars, women and extravagance that are trotted out to entice Furst eventually give way to real danger; he’s nabbed by the FBI, cohorts go missing, and all signs point to the fact Block is far from a nice guy. The beats all occur as you expect them, and there’s a feeling that the majority of the character development was charted using multi-colored post-its to suggest mood and plot changes.

If not for its upbeat cast and lovely location shooting (even if that location is Puerto Rico and not Costa Rica) Runner Runner could be a late night cable offering. With Furman, the crime is that none of the seedier elements amount to anything interesting, and there’s no believable tension tying one scene to the next. Don’t look to the characters to get you through, they feel like cardboard placeholders, at best.

While he’s done fine work in films like Friends with Benefits and The Social Network, Timberlake still hasn’t found a role he can ride to leading man status. Like 2011’s In Time, Runner Runner shoehorns him in without an opportunity for organic development, making the audience feel like we’ve had another ‘big star’ foisted on us without just cause. So much of Timberlake’s work as Furst feels stilted and slight, and that doesn’t go away when Affleck is on screen. The trend of late regarding Affleck continues; he comes out on top despite all the things Runner Runner has wrong with it. In his own directed films, it’s not surprising that he carries the day, but it’s something else altogether to report that he’s the very best thing about this otherwise tepid movie. If someone had found a plot worthy of his Block, we might have gotten a performance to inspire anticipation for his Batman gig. Instead, Ivan Block looks like an easy waltz with a paycheck, even as Affleck plays him to the hilt and beyond, drawing back just before our suspended belief comes crashing down. Gemma Arterton as one of Block’s pretty acquisitions and Bob Gunton as a hard-nosed dean add a few flashes of energy here and there, while Anthony Mackie frequently amuses as FBI Agent Shavers.

There may have been a good movie somewhere in Runner Runner but it’s not even in sight as it stands nows. There’s nothing terribly wrong with the film from a technical and structural perspective, and Furman has a knack for framing images and organizing individual sequences, but emotionally and dramatically, it’s a cold fish. We have seen this same material mined so many times that it takes a very special kind of artist to con us into finding it fresh. Runner Runner doesn’t have any of that finesse; it keeps fumbling the draw and revealing its bum deck far too early.