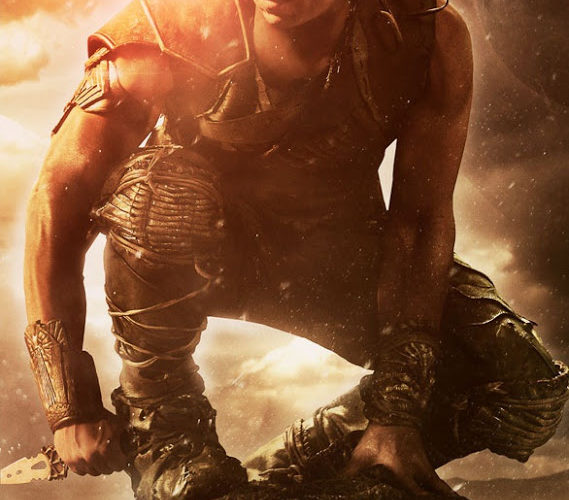 One must give David Twohy’s Riddick credit for caring about its protagonist and the world he inhabits, so much so that the first twenty minutes of this pulpy sci-fi concoction are just Vin Diesel and his alien canine wandering around the planet he’s been abandoned on. Intent on scaling the character back to his savage, minimalist roots the creative team is gunning for the fan base, but there is more retread here than you are expecting.

Nearly thirteen years ago, Twohy and Vin brought us Pitch Black and introduced audiences to too-cool, sees-in-the-dark brute, Richard B. Riddick, a B-movie badass if there ever was one. Black was a modest and darkly thrilling creature feature that ran off Diesel’s glowering presence and Twohy’s nimble structure. When Riddick returned in 2004 with The Chronicles of Riddick, everything was of a broader scope and bigger budget, but also significantly more muddled — Twohy embraced his ambitions but fell short. Sure, the growling anti-hero was back, but he wasn’t playing in the survival horror sandbox anymore, instead testing mettle with an intergalactic menagerie that looked like they stumbled out of Dune: The Vegas Floor Show.

Riddick is now the third appearance of the titular character on the screen, although he’s had his own animated film and a couple of video games to boot. Perhaps what many will be asking after the credits run here, is why, exactly, is he worth revisiting? Twohy, Diesel and everyone working on the production have obviously sank plenty of passion and heart into this venture, but does that translate to excited, engrossed audiences? Unfortunately, the film never gives us a real reason to invest in Riddick the way his creators have. Who he is, where he’s going, and what he’s about aren’t ever really relevant because he seems to reboot before the start of each new installment. Pitch Black ended with a serious moment of redemption for the hardened murderer and criminal, but Twohy never chased that sparking conscience into the next film, instead sending Riddick sprawling through the galaxy like Conan the Barbarian on a droll bender. The last we saw of him in Chronicles, much like the fantastical Cimmerian, he sat in a mighty throne, stooped low with the burden of the crown. When he appears again in Riddick he’s been stripped of his Necromonger armies, his swashbuckling momentum, and back to square one; a tough customer scraping up enough gusto to stay alive. For dramatic purposes, he’s not a dynamic character, but a video-game tough guy. Maybe that’s why his interactive titles tend to generate the most interest.

At first, this works. Diesel steps right back into the character, and this pared-down man of action is a good fit for the actor, who has in recent years honed in on his strengths and pushed them in his favor.  There’s some reference back to the last film, including a cameo by Karl Urban that looks like K.D. Lang if she were LARPing, explaining how Riddick was betrayed and denied the prize of his long lost home planet, Furya. The extended opening truly capture the thrust of old dusty sci-fi epics as Riddick learns to buck-up and adapt to a planet whose only biological aim seems to be to kill you. When a storm bearing monsters similar to the creepy-crawlies of Pitch Black starts encroaching, the resourceful Riddick sends out an alert that has bounty hunters coming down to planet’s surface to collect him. It’s not long before everyone involved is re-enacting the first film, to seriously diminishing returns.

Riddick is a film of shifting tones and pieces, trying to keep us interested in our mercenary hero without pushing him to the center, the very thing that appeared to hobble Chronicles. In that nearly wordless first act,  he’s a buffer Robinson Crusoe, with an extraterrestrial hyena as his Man Friday, in the second he’s Jason Voorhees to two different bounty-hunting teams who want him for different reasons, and finally he’s just good ol’ Riddick from Pitch Black, running through the dark and rainy night while fending off horrible stuff with teeth. There’s very little room for inspiration or imagination, and Twohy and the gang don’t apply any. Down to the major beats, this is a clone of the original, but without the drama and energy. The new faces amongst the bounty hunters don’t do much to enliven things. Katee Sackhoff’s Dahl is just Starbuck on steroids, if one can even imagine such a thing. She sneers, she spits, she fights and, spews out the terse, dull dialogue along with the rest of the guys. Matt Nable is her commander, a man who’s a got a personal reason for chasing Riddick, tied to the events of Pitch Black, although the new film seems to have much faith that we’ll recall his connection based on name alone.  The previous films aren’t exactly Star Wars or Star Trek when it comes to geek cannon, so expecting extreme familiarity is probably a stretch. In fact, the less familiar you are with Riddick and Pitch Black, the better you will enjoy this one; it might even seem somewhat refreshing.

What’s honestly disappointing about Riddick is that it never seems to figure out why we would want to follow the main character, outside of his propensity for violence and snark. That’s not enough to float three movies, let alone the bigger budget follow-ups that Diesel and Twohy want to create. There’s a reasonable seed here, but no one has ever properly cultivated. When all else fails, Diesel himself seems to channel Dom Toretto, exclaiming, “I’ll drive it like I stole it.” Amusingly, what might have brought some welcome juice to Riddick was Diesel’s Fast & Furious co-star Dwayne Johnson, whose affability would have gone over much better than Dave Bautista’s leering beefcake. Watching Diesel and Johnson wipe the universe with each other would have been more fun, and hey, they could have called it The Fast and the Furyans.