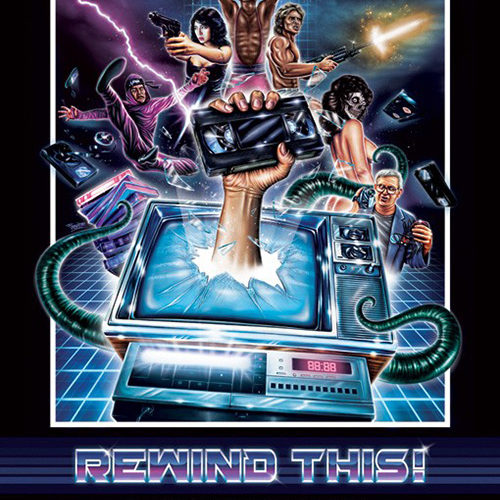 When the slew of collectors, producers, sellers, bootleggers, and fans interviewed for Josh Johnson’s documentary Rewind This! are asked to comment on the legacy of VHS tapes and what the format brought to the movie industry, the consensus seems to be all about accessibility. Not only did the home video revolution allow people to watch content that had previously disappeared after leaving theatres, it also gave aspiring filmmakers a new avenue with which to join the annals of cinematic history. The population could now buy and rent movies no one had ever seen before, eventually acquiring the power to record television programming with the complete freedom to choose their own personalized viewing schedule. Reigning supreme for fifteen years, VHS irrevocably changed cinema forever. Half nostalgic trip through the collections of eccentrics and half history lesson on technological advancement, Rewind This! justifiably anoints the videocassette as a cinematic invention as important as film itself. It brought movies to the masses in a way the theatre never could, transforming late night coffee shop conversations post-screening into a community of cinephiles taping and trading hard-to-find classics never again worrying they might miss the chance to join the debate. VHS took control over content distribution away from the studios and into the hands of the people, leveling the playing field in the process for independent productions lacking the necessary budget to screen alongside studio pictures at the multiplex. By sitting on video store shelves together, audiences could decide what to watch on their own.

Succeeding as a collection of cult treasures like Bubba Until It Hurts and Frankenhooker’s ubiquitous “talking box” while also spotlighting cover artists like Steve Chorney and Keith Batcheller, Johnson’s document is at its best when detailing the format’s evolution. Whether an explanation of the Betamax/VHS war, the introduction of home distribution via Andre Blay’s Magnetic Video, Media Entertainment’s decision to lower prices to $19.99, or Japan’s Toei embracing straight-to-video production, we hear the blow-by-blow timeline that brought us to our present generation of film lovers uninterested in physical media from the mouths of those who lived it. VHS catalyzed the paradigm shift towards on-demand content being made available at our fingertips. It revealed the possibilities of mass consumption and ultimately taught studios how to exploit alternative distribution sources. A ton of recognizable names are interviewed about personal affinities towards the technology with some sharing stories that prove their careers were directly indebted to the VHS boom. Actresses Cassandra Peterson (Elvira) and Shôko Nakahara (Visitor Q); directors Lloyd Kaufman, Jason Eisener, and Atom Egoyan; and critics Drew McWeeney, Todd Brown, and James Rocchi all provide anecdotes and insight that legitimizes what many today have already forgotten. But while an industry guy like Basket Case director Frank Henenlotter may give the best soundbyte when he declares Criterion Collection’s arty covers boring, it’s the words of video store owners and super collectors that get to the heart of this topic’s essence. And no, it’s not the resulting porn industry explosion through privatized viewing possibilities.

The real treat of Rewind This! is the geek-speak about VHS tapes telling uniquely distinct stories. Whether tracking glitches crawling up and down the screen before scenes its previous viewers rewound to the most—boobs and blood—or the layers of taped over content captured and retained at the tape’s end, digitized media’s pristine pictures and aspect ratios simply can’t compare to knowing your video copy of a movie was uniquely different from your friend’s. VHS possessed a personality all but extinct in today’s iTunes/Netflix homogenization, one that keeps it relevant to this very vocal contingent of cinephiles who understand our transition from an analog world only continues to isolate us into self-absorbed pods attached to the same centralized network devoid of identity. They know bootleggers in the VHS age actually helped lesser-known films gain exposure and they acknowledge that some schlocky classics exist only on videotape and may soon disappear completely. Johnson has in effect created a call to arms for fans to rally together and educate the film-going public on the necessity of video restoration as a way to preserve a litany of work. With masses scoffing at B-movie lovers’ eclectic tastes, hearing a luminary like Egoyan talk fondly about videocassettes goes a long way towards legitimizing the format as a historical artifact worth saving. If Ed Wood can earn mass appeal for his lack of talent on celluloid, why should David “The Rock” Nelson be deemed less of an artist for creating on video?

Johnson’s documentary has a lot going for it in terms of pointing out how baseless this distinction is, but the sheer number of topic and thematic changes may convolute things when switching between collectors, historians, filmmakers, porn producers, and back again. The wealth of information included makes me wonder whether Johnson could have made multiple full-length chapters instead of cramming everything into one comprehensive whole, but such a maneuver might not have proved even half as interesting. His is a tapestry dense with factoids and humor helping viewers remember the days before skip searching and load times. And while video may simply have begun as a way to expand cinema’s reach, it eventually spawned an artform in and of itself worthy of being appreciated as such.