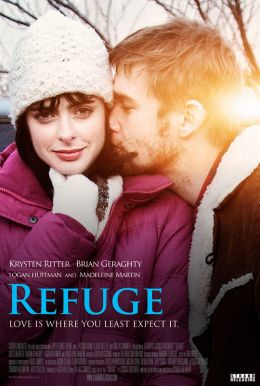 A guy walks into a bar in a sleepy suburban town, asks a girl where the nearest motel is; girl takes boy home and asks him to stay for good. Jessica Goldberg’s Refuge opens like many a character-driven indie of a certain budget and ambition, but develops into a beautiful subtle character study led convincingly by the four performances at its core.

Krysten Ritter plays Amy, a young woman who has become a defacto mom to brother Nat (Logan Huffman) and sister Lucy (Madeleine Martin). Both suffer emotional damage from their parents’ departure — they went on vacation to Florida and simply never returned — and each is dealing with the trauma in their own way. Although we’re never told of Nat’s condition, he’s chronically shy and subtly angry. A shop keeper takes him under his wing all too briefly, letting him know that although he may not see it, people really do care about each other. Lucy is a complex troublemaker whom often serves detention, pops meds, parties with an older crowd, and engages in other physical and psychological self-destruction.

Enter Sam (Brian Geraghty), the “guy” who walks into a bar. He’s a drifter from Cleveland who is headed south to Mexico and perhaps is in the process of driving back when he stops at random in a small town that looks to be somewhere between Pittsburgh and Erie, PA (IMDb informs me the film was shot in Southampton, New York, although the cars carry Pennsylvania license plates). Sam, a highly functioning alcoholic, likes Amy in spite of what he later finds out from strangers in a bar, yet this is not really that kind of love story.

Adapted from her play, writer-director Goldberg has crafted a unique, beautifully constructed drama that, despite hitting a few notes just a little too hard, often progressives with the right tone. Beautifully and poetically shot in the dead of winter, Refuge features strong performances led by Ritter. Known for her work primarily for her sassy comic timing in projects like Veronica Mars and She’s Out of My League, here she gives a subtle performance as a bibliophile who once had a bright future that has been derailed. It is a path that she doesn’t quite regret and her only escape is sneaking out for a few beers and potentially a one-night stand with a local yokel, and thus she’s attracted to Sam.

What is so special about Refuge is that is about places and characters we don’t see on screen; this is the face of any town America, and how folks function day to day on the edge of poverty. It’s not very pretty, but they know how to run things.