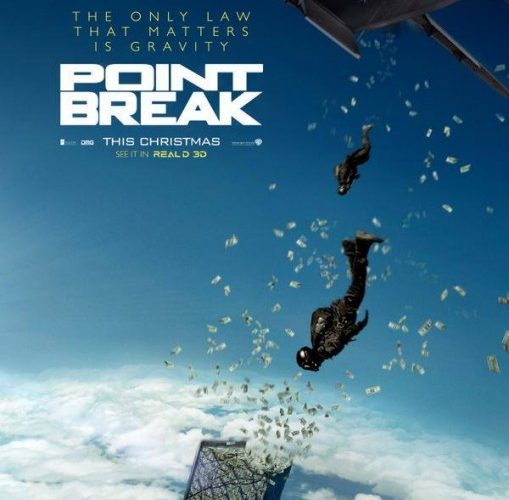 We’ve officially come full circle. Point Break arrived in 1991 with more cheese than a Green Bay Packers game and ten years later a fresh generation got to enjoy an ambiguous cops and robbers romp that moved the same basic plot from ocean to streets with The Fast and the Furious. It’s probably an obscure connection at best, but the cinematographer of that unofficial remake, Ericson Core, just happens to now be the man to bring a brand new version of the original story to life as his sophomore directorial effort. This time the names are mostly the same—screenwriter Kurt Wimmer realized “Utah” works better as a nickname than given surname—and the waves make a return too even if they aren’t quite as important.

I know this is sacrilege to say, but Kathryn Bigelow’s cult classic dripping in nostalgic testosterone is the perfect property for a big-budget remake. If you look at the 90’s version with Keanu Reeves and Patrick Swayze objectively you will see a ton of flaws that better technology and a more ambitious fear threshold could improve upon. And I’ll be the first to admit Core and Wimmer do just that on many counts. The stunts here are insane and the effects work is good enough so that we aren’t laughing at Bodhi’s introduction in the water because the stuntman looks nothing like Swayze. Adding a series of extreme sports like base-jumping, snowboarding, and motocross amp up the thrills exponentially. Unfortunately, the X Games peaked around 1998. So even though it’s cool to see the revamped Bodhi (Édgar Ramírez) and Johnny “Utah” (Luke Bracey) free-climb the façade of Angel Falls in Venezuela, its level of “extreme” is less intense fear for the characters and more anticipation of the fight we hope will occur at the top. Core revels in the beauty of nature and the danger of taming it, but showing such is meaningless if the plot is so weak it barely strings the destinations together. It’s funny: after re-watching the original I thought it was a gross oversight to make us empathize with Bodhi and his shock the system virtue despite never explaining why. The new Point Break shows Wimmer felt the same way because he fully embraces Ramírez’s noble cause to his detriment.

The reason Swayze never cogently shares his motivation and instead simply devolves into a madman adrenaline junkie with a death wish is because the truth was probably as eye roll-inducing as the one set-up here. Why are Bodhi and his crew of misfits (Tobias Santelmann‘s Chowder, Matias Varela‘s Grommet, and Clemens Schick‘s Roach) finding insane stunts? To accomplish the Osaki Eight, a fictitious journey of will and heart risking life and limb to show the world how beautiful our Earth is. And for every “ordeal” accomplished the risk-taker must also give back—hence the Robin Hood acts of amoral justice. While it’s not too bad explained succinctly like this, it is when Teresa Palmer‘s Samsara puts her mystical “flower child” spin upon it. I wanted to appreciate its absurd simplicity, but I found myself aligning with Delroy Lindo‘s FBI Agent throwing his arms in the air incredulously instead. I mean, really? All these resources are being put to work so they can arrest a few hippies? Thank goodness “Utah” decided to get his GED and go to law school because his background as a YouTube extreme athlete sensation really comes in handy deciding where Bodhi and the boys will hit next. One thing the original wasn’t was convenient. Its Utah that was a bona fide agent who had to get some lumps learning how to surf. Core’s “Utah” is pre-packaged off-the-assembly-line crazy. Of course he’s going to love Bodhi’s drive to succeed, but why will he want to do his job?

Wimmer’s script never answers this question and instead spends two-thirds of its runtime with “Utah” globetrotting alongside Bodhi. Not only that, but the whole “criminal” aspect is completely excised despite these Osaki followers engaging in heists during their first two “ordeals.” The next four are about the adrenaline rush alone and actually had me settling in for a completely different movie than the one set out. It was such a long reprieve that I forgot “Utah” was FBI and strangely enough this portion was better than what the plot eventually circles back towards. Why? Because no one outside Bodhi’s world is remotely interesting. Lindo’s merely our skeptical authoritarian buckling at every one of “Utah’s” hunches and Ray Winstone‘s Pappas is a shadow of what Gary Busey made him. When “crime” finally returns it’s through special effects-heavy explosions or the aftermath of the real action. The bank robberies are merely MacGuffins for the next mountain. And while the mountain stuff’s cool in 3D, it does nothing to facilitate an actual film. Don’t get me wrong: Wimmer’s script improves many things, including how Palmer’s love interest is used in comparison to 1991’s Lori Petty. I even liked the serious tone aligning with the international flavor and life or death stakes—although it renders the Reeves screaming and unloading his gun into the sky callback stupider than it was two-plus decades ago. There’s just nothing else to hold onto. “Utah” is a whiner and I was too busy laughing at Bodhi’s severe Gaia-redeeming rhetoric to get behind him either.

In the end it feels too much like Point Break to not have the cheese factor everyone loved and too much like it to take it seriously as its own entity. So even though the first was flawed and in need of improvement, the filmmakers probably would have been better off using it as inspiration rather than an exacting blueprint like the still going strong The Fast and the Furious franchise did. It’s fifteen years too late to really grab the extreme sport enthusiasts who would rather stream real people doing these stunts online than pay ten bucks for Hollywood’s quick-cut pastiche. It also forgets that the over-the-top forbidden bromance between white hat and black worked through its cornball comedy. As a drama it’s merely overwrought and unnecessary.