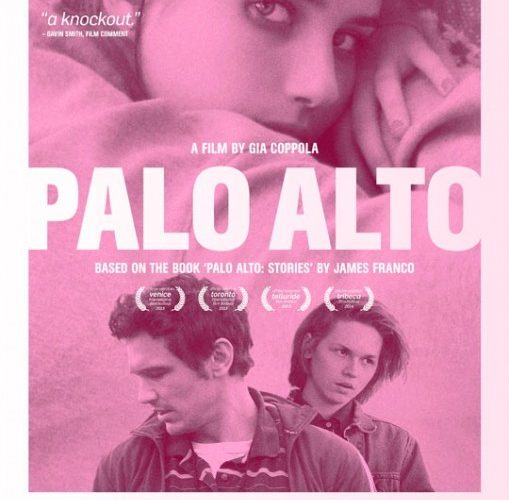 In the opening shot of Gia Coppola’s feature-length debut, Palo Alto, the camera slowly zooms in from afar on a parked car where two teens, Teddy (Jack Kilmer) and Fred (Nat Wolff), are getting high. The content of the shot, a pair of youths in disarray, and the voyeuristic camerawork echoes the dynamic home robbery sequence in 2013’s The Bling Ring, a film by another member of the Coppola family.

A tapestry film centered around the malaise of a group of high school students, Gia Coppola, in addition to directing, adapted the screenplay from James Franco’s collection of short stories. Blooming into a series of divergent sequences, we follow the promiscuity of Emily (Zoe Levin), Teddy’s community service in the wake of a drunk driving accident, Fred’s increasingly alienating behavior and April’s (Emma Roberts, in a dynamic performance) taboo relationship with her soccer coach Mr. B (James Franco).

The weight of Palo Alto’s artistic collaborators and inspirations loom large over Coppola’s film. April’s room is adorned with a poster for The Virgin Suicides while the judge that offers Teddy a chance at redemption is provided in a cameo voiceover by the patriarch himself, Francis Ford Coppola.

Gia Coppola’s artistic sensibilities invite viewers to compare and compartmentalize the film amongst the established Hollywood clan; April rides home in the backseat of a car after sharing a naive and misguided kiss with her older employer and mentor Coach B. Her hand glides outside the window in slow-motion while an ethereal and luscious score plays. The actress and circumstances may be different than the images set forth by Sofia Coppola years ago, but the the same emotional response is triggered, hindering Gia’s film from fully forming into something on its own terms. The film adopts another overbearing influence in Franco, as the young characters all speak with the writer’s cadence and rhythm. Two girls analyze Emily’s blog and summarize that, “She will suck any dick anyone puts in her face.” That crassness, ripe for discussions about jerking off or the minutia of weed paraphernalia, feels at home in broader comedies like Pineapple Express and This is the End but offers no reprieve from the heavy-handiness here.

Palo Alto traces the familiar pitfalls of adolescence; uncommunicative and hypocritical parents, the aimlessness of youth, pressures of encroaching responsibility and adulthood, all wrapped in dark tales that skirt on the edge of violence as these teens engage in hedonistic sequences of drinking and inhaling substances. The victim of Teddy’s drunk-driving hit and run incredulously exclaims, “It’s a kid!” and a crowd of adults watch in disgust as he is arrested. The divide between their world and the youth is firmly entrenched. Coppola’s film, though meticulously shot and sensuously edited, is unlikeable to the point that we don’t want to be on either side of the battleground.

Coppola’s inclusion of the iconic Phoebe Cates pool sequence from Fast Times at Ridgemont High (watched by April and Coach B’s son) punctuates her point that high school isn’t always comprised of fantasies and good times. The reality is that for many, those four years are marked by a more moderate, complicated set of things, and not the relentless bleakness displayed in her film.

Palo Alto screened at Tribeca Film Festival and will open on Friday, May 9th.