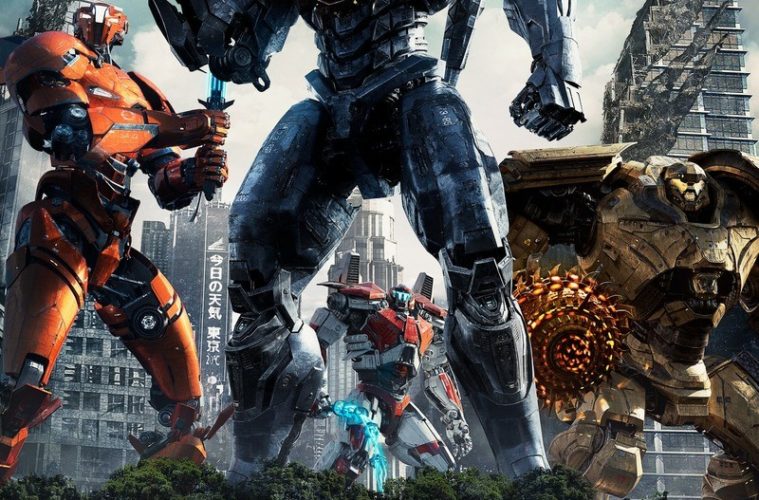 Despite both the title and tagline, at no point in Pacific Rim Uprising does any one or thing rise up. Keeping this in mind should properly set your expectations of the movie’s intelligence. Shorter, lower-budgeted (comparatively), and more Chinese-produced than the first film, Uprising also manages to surpass it. Granted, I was not a fan of the first film. Director Steven S. DeKnight cares less for small grace notes (think the robot nudging a Newton’s cradle in the first film) than Guillermo del Toro, but also has a much better command of action. Most crucially, it outdoes its predecessor in embracing big-kid-playing-with-action-figures fun, and that makes it measurably more enjoyable than a lot of similar blockbusters.

Granted, it still falls short of diving full-throated into Saturday morning cartoon territory. I can’t claim to know exactly what The Kids like (Minecraft, I guess?), but I feel a movie truly tuned in to their mindset would fixate more on what this young series is allegedly about – those big robots (Jaegars) and monsters (Kaiju). The Kaiju still have ugly, samey designs. The Jaegars still look cool (and have delightful names), but are identified so quickly and offhandedly that it’s difficult to know which one is which. In a late sequence of pilots revving up their Jaegars, it isn’t well-established who’s in each bot. It doesn’t help that we’re barely introduced to most of these pilots, each one developed with a single character trait at best and all of them collectively relegated to a subplot for most of the film until it’s time for them to shine. I’m sure that the supplementary materials have detailed backstories for all of them, and perhaps this is how we’re really supposed to engage with franchise films now, as the realization of the build-up in marketing and tie-in products, rather than stories which can stand on their own.

There’s a reason that giant robots have traditionally been most at home in TV animation (especially anime). That medium both provides the breathing room to develop a large cast and doesn’t have to worry as much about budget constraints. DeKnight comes from TV – having written and produced, among other things, the tremendously fun Spartacus and the first season of Daredevil – and one suspects that he could do so much better with this material in that realm, rather than rush through things in a single movie while trying to set up yet another cinematic universe.

I haven’t described the plot, and I won’t, because do you care? Do you truly care? What’s most important is that lead John Boyega again proves his incalculable charisma. It almost makes you wish he’d come about a few decades earlier, back when star power was still a thing and his name could have singlehandedly sold a movie. The story tosses perfunctory roles to its peripheral cast but absolutely does not care about any of them even a hundredth as much as it does Boyega – and since that cast features the likes of the immobile Scott Eastwood, you can’t much blame the movie for doing so. Newcomer Cailee Spaeny has the biggest supporting role as a teen mechanical whiz, and her arc is weirdly a copy of Rinko Kikuchi’s from the first film, right down to an exact retread of a major flashback sequence. This is what four writers and nebulous planning for future sequels and spinoffs will get you.

Pacific Rim Uprising is a mess, but when it gets to the business of robots beating up monsters (or sometimes other robots), it’s a blast. Abandoning the lumbering, always-nighttime slugfests of the first film, these battle sequences happily ignore gravity and revel in wanton destruction. The utter unreality of a Jaegar getting ridiculously smashed through several skyscrapers as if they’re made of matchsticks is a feature, not a bug. It’s like what Michael Bay has been trying to do with five Transformers, indulging the fluid possibilities of CGI action – only better, because it’s not edited in a way that makes your head feel like it will split open. It still isn’t the purest ideal of cinematic robot fights – again, we only get half an inkling of who’s driving which robot in the climax – but it earns this jumble of metal a heap of goodwill from me.