Out of the Blue Review: Neil LaBute’s Noir is a Silly Exercise in Delayed Gratification 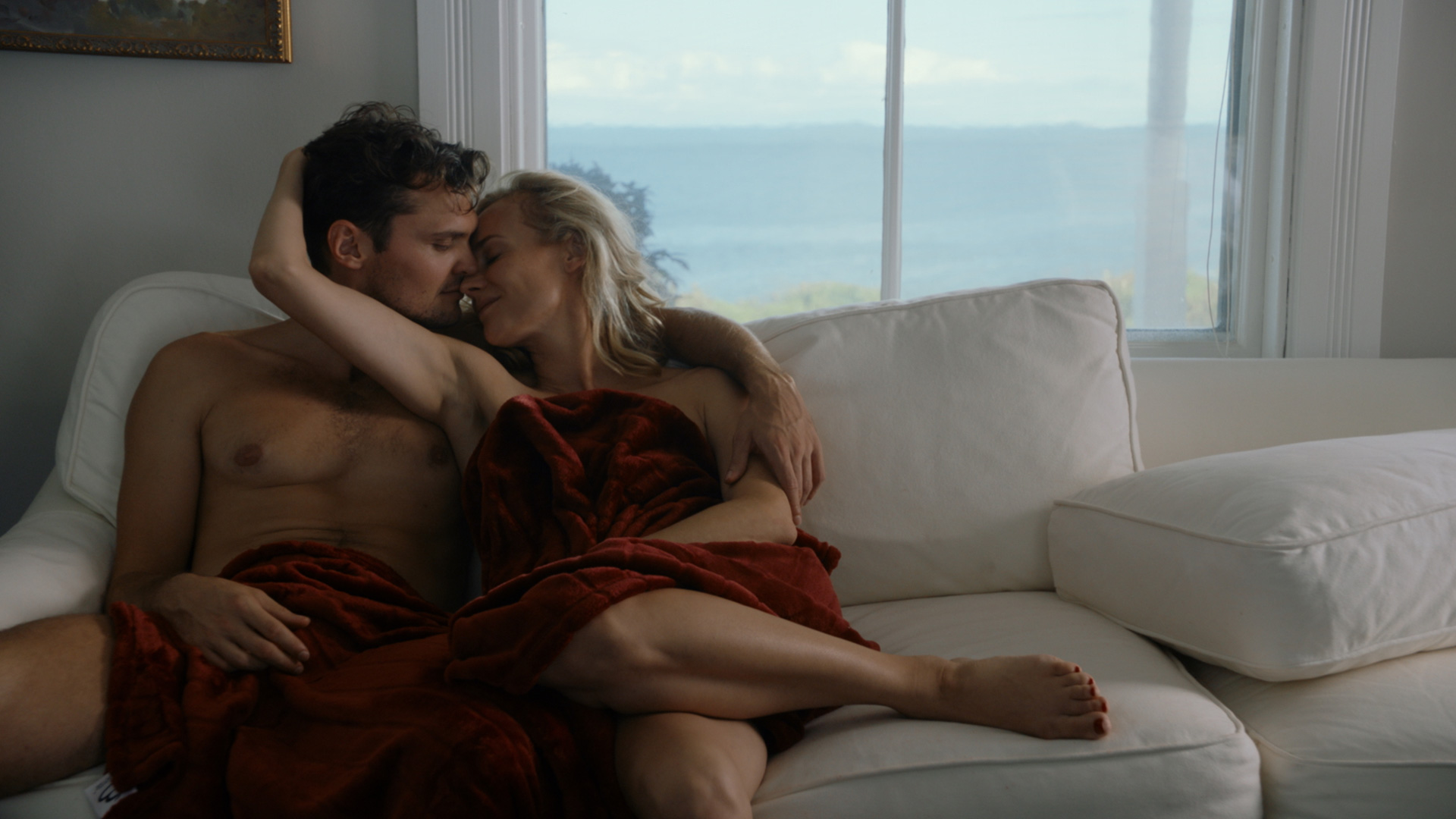 A new cinematic drinking game has arrived. It’s a doozy, too, when taking a shot every time writer-director Neil LaBute uses an intertitle demarking time in Out of the Blue means you’ll probably pass out before Connor’s (Ray Nicholson) inevitable plan to kill Marilyn’s (Diane Kruger) abusive husband is floated, let alone put in motion. Many are arbitrary. Some are exacting. Few have narrative relevance beyond telling us something we already know. I’m thus unsure what the point of using so many is, beyond earning an incredulous laugh—some bookend thirty seconds of footage that provide nothing of consequence anyway. If a character mentions that an event will occur on Tuesday, we don’t need to see “Tuesday” before transitioning to said event. It’s implicit.

My guess is that LaBute merely hopes to elicit mood. Film noir plays in the background of many scenes and Marilyn, wanting to read something with murder—preferably that of an evil husband—gets a James M. Cain recommendation from Connor. So by breaking down the weeks, days, and sometimes hours is LaBute able to supply his script a meticulous, visual rhythm that matches the melodramatically overwrought characters who move about his story as though the world is propped upon their shoulders. Impulse and improvisation have no place here. They can’t if the love shared by Marilyn and Connor is to survive what must be done. One deviation from the plan could land them in jail.

But my discussing that plan is premature. This film is literally about a man and woman planning her husband’s demise to live together happily ever after, but there’s roughly 70 minutes of exposition before we get there. 70 minutes of forbidden romance from beaches to cottages and multiple new revelations. Jokes about how often Connor runs. Tense moments with his short-fused yet empathetic probation officer (Hank Azaria’s Jock) and the even shorter-fused Deputy Fox (Frederick Weller) who is conversely itching to blow his head off. Sweet flirtations on behalf of Connor’s co-worker Kim (Gia Crovatin). And new wrinkles, such as Marilyn’s desire to protect a stepdaughter (Chase Sui Wonders’ Astrid) who happens to be dating someone from Connor’s past (Keilyn Durrel Jones’ Jared).

So despite us feeling this dark, murderous cloud looming above the action, it isn’t mentioned until the last 30-or-so minutes. Connor can’t stand to think about what Marilyn’s husband does to her and Astrid, but he’s a nice guy (rap sheet or no). He wants to call the cops. He wants to put this violent man behind bars. It’s the books that finally allow the central crime to click into place—those books are the public-facing connection to account for two people who shouldn’t know each other always seeming to smile in the other’s presence. As both their love and confidence to sneak away grows, Marilyn’s off-the-cuff ruminating about those noirs (which free their characters to no longer live in fear) become pleas.

The problem, of course, is that pushing the inevitable further down the line doesn’t free us from its inevitability. It frustrates, especially when we aren’t learning anything new in the meantime. LaBute’s other 2022 film uses a similar tactic, but the comedic banter shared by the leads in House of Darkness entertains. It keeps us invested in the characters and on our toes as to when the other shoe might drop—their verbal sparring causing us to second-guess how far things may devolve. Here we’re just watching two enamored souls trapped by repetition, devoting their love while lamenting the issue preventing its proliferation. Rather than add intrigue, it delays gratification. Because we know one is using the other. Twisting the “why” isn’t enough to negate that certainty.

The exposition establishes the aftermath rather than the event itself. Marilyn’s husband will be killed. Connor will be put in a position that implicates him for it. Nothing will change those events, and that certainty flips a switch in our brains to start hypothesizing why we’re being made to watch everything else that happens anyway. The result for me was reaching the end with a shrug instead of surprise. LaBute is being too meticulous to allow his narrative any give, ultimately delivering exactly what’s expected. So I can’t stop wondering if Out of the Blue is intended as parody of the noir sprinkled throughout. He shoots it with the earnestness of homage, yet those intertitles and lack of deception renders the whole silly.

Not enough to laugh out-loud, though. We’re too detached for that reaction, watching to see what we already know is coming. Nicholson’s endearing protagonist willing to do bad things for good reasons is effectively drawn regardless. His motivations are too. Should his Connor have questioned his complex ordeal? Sure. For someone so well-versed in noir, he seems completely oblivious to the concept of a femme fatale, even as one stares him in the face. Not that Kruger isn’t believable as far as seducing a man ten years her junior in a way that makes him not want to question her authenticity. The film’s simply a bit off-kilter—written with influences blatantly on its sleeves yet uninterested in subverting any assumptions that fact guarantees. I must be missing something.

Out of the Blue hits limited theaters and VOD on August 26.