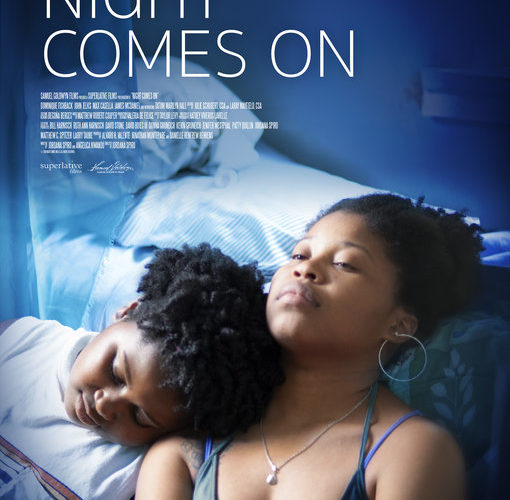 Review: ‘Night Comes On’ is an Introspective Road Movie with a Swirl of Emotions

When the parole board asks seventeen-year old Angel Lamere (Dominique Fishback) why she hasn’t seen her younger sister (Tatum Marilyn Hall’s Abby) in two years despite only being incarcerated for one, her reply was an honest yet simplistic, “I wasn’t a good influence.” The fact that she is where she is proves this statement to be the truth, but we’re soon to discover there’s more to it than a flimsy sense of altruism. The decision was conversely a selfish one: necessary, but selfish. Angel was the one who had to live with the memory of what their father (John Jelks) did to their mother (Nastashia Fuller). She’s the one who cannot forget what was taken from them and seeing Abby’s intact innocence unfortunately only made that burden worse.

First-time feature director Jordana Spiro and cowriter Angelica Nwandu are quick to portray the regret this reality fostered. We hear about what happened in the aftermath of their father’s actions and learn what Angel endured to protect that very same innocence in her sister. The question at the back of Night Comes On is therefore why she ultimately chose to leave. Why did she go down that road towards jail? Why did she need the weapon that earned her a year behind bars and the tough journey to come on probation with a permanent record? We don’t have to speculate for long once freedom’s first act is to purchase another gun. She’s still trying to protect Abby from that memory. She’s still trying to avenge her mom. The film isn’t one seeking to provide surprises in this way. Angel’s motivations are clear as day: find her dad. Her parole officer wisely knows not to give up his address and Abby, despite being only ten, also knows what that information means. What we experience instead is the swirl of emotions within this young woman. The drama stems less from whether or not Angel will confront her father in the future than how having her sister back in her life will affect the present. She may seek to use Abby as a means to an end, but the love that exists — the love that still drives her forward — can’t be ignored. As one looks back at what was, the other hopes for what can still be now.

An introspective road movie commences as the two siblings take a bus towards their father’s new house (one Abby admits to having visited). The trip shows just how different they are with little more than their interactions with strangers. Where Angel does everything she can to stay quiet and watchful, Abby dives straight in to make new friends and play games. The older girl worries about the dangers of getting too close to strangers and tries pulling her back, but maybe she needs a push in. Why shouldn’t they open up to the trappings of a “normal” life? Why can’t they use this reunion as a path towards rebuilding a family in their image alone? Joy is possible for Angel if she can let go of the pain. As anyone who’s experienced the type of deep-seated suffering and psychological turmoil as her knows, this is easier said than done. Angel had love (we meet her girlfriend from before her detention) and had family that looked up to her and relied on her strength. But those things can only provide what privileged outsiders believe are intrinsic to them if the person desperate for their calming effect is able to see them as more than distractions. There’s no outlet for her anger if Angel isn’t willing to bare her soul to her girlfriend or sister. That rage towards her father and longing for her mother simply festers until the happiness anyone yearns to supply her feels unearned or worse: false. And it’s brought her to a tipping point.

She faces a crossroads that will define the rest of her life. Will she embrace the light her mother imbued upon her or the darkness to which her father succumbed? It may not seem like Angel has a choice at the start, but perhaps that’s exactly how she wants it — intentionally doing everything in her power to not see her sister before her mission is complete. Only when they’re face to face and we’re shown Abby’s sweet smile (and subtle jealousy when affection is given to anyone other than her) do we realize this ten-year-old is the last thing keeping Angel afloat. Abby is also the only person who can scold her with resonating truths, cutting through that shield of sarcasm and indifference to her sister’s heart. You have to give full marks to young Hall as a result. Her Abby is a raw nerve attempting to curb her excitement so as not to risk feeling abandoned yet again. While she hasn’t escaped down a path towards nihilistic cynicism like her sister, talk about school and life during the past year proves her toes are curling over that cliff. Abby clings to hope that Angel wasn’t lying when she said she’d take care of her upon turning eighteen and we hope this dream comes true too because we’ve seen Angel’s maternal instincts kick in. But with every step taken towards her father and every missed call from her parole officer, the odds begin to skew south. And whenever things seem better, Angel’s anger calls out.

The whole therefore hinges upon Fishback’s performance and she assuredly carries it upon her shoulders. Spiro and Nwandu allow her to shine by letting the internal struggle she wages be the main thrust of everything we see onscreen. It’s about how Angel as a character reacts to what’s happening to her and how she copes with the reality that there are no easy answers. We witness the constant war behind her eyes with each decision: her one-track desire for closure versus the knowledge that what she seeks will inevitably destroy herself as well as her sister. We follow her as life comes flooding back to replace the dull pain of darkness and watch her discover that nightmares possess only the power we give them. She can let go.