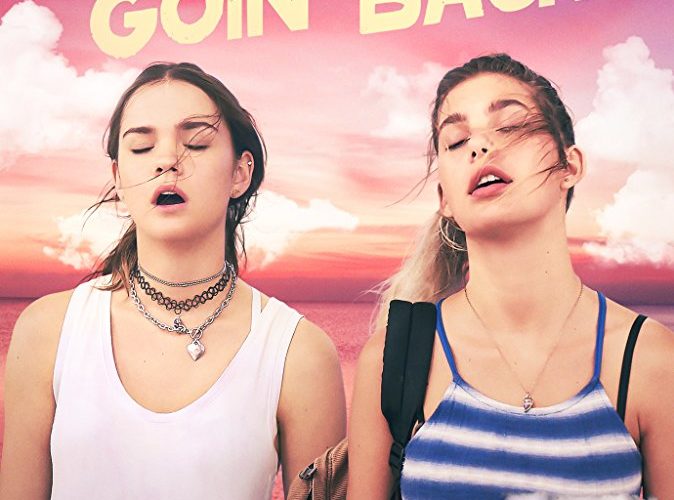 Review: ‘Never Goin’ Back’ Subverts the Slacker Comedy, But to What End?

The first thing that came to my mind after watching Never Goin’ Back was “oh, it’s a female version of Dude, Where’s My Car?” and I didn’t really know what to make of that. As mainstream films constantly celebrate the culture of the straight white male slacker, women have always appeared on the periphery as accessories in the advancement of the men’s plots/desires. And in many ways, just by giving us female characters who are also slackers, writer/director Augustine Frizzell is sending out a strong feminist message. But to what end?

The film’s plot is quite simple: BFFs/stoners/roommates Angela (Maia Mitchell) and Jessie (Camila Morrone) want to spend a few days in Galveston. They dream of eating donuts and relaxing by the beach, but they need to come up with a little bit more money to make this come true. As if their low wage waitressing jobs didn’t make it hard enough to make money, their roommate–straight white dude Dustin (Joel Allen), who happens to be both Jessie’s brother and also the world’s most inefficient drug dealer–makes their dream seem even more impossible when he loses his share of the rent money.

Convinced that the only way to come up with the funds to pay their trip and their housing is to steal it, Angela and Jessie embark on an accidental pot-cookie-infused journey that sees them spend time in jail, visit a series of parking lots, and do tons of daydreaming. Basically, they get to do what straight white men have been doing on film forever (if nothing else, kudos to Frizzell for making the men in the film as inconsequential as male directors often make female characters).

But as a queer writer of color I often find myself conflicted upon encountering works like Never Goin’ Back. On the one side, I applaud reminders that underrepresented people should get their time in the spotlight, but I wonder if part of our reclamation process is to recreate the works of mediocre white men with people who look like us. Do we need to see people of color and women in slacker movies, bad action films, and cheesy romantic comedies? Are these ventures into showing apparent equality merely more ways in which we self-oppress?

As an exercise in female empowerment I can do nothing but applaud Never Goin’ Back. (I won’t get into my issues with the way in which most of the people featured in the film constantly oppress people of color–at least not right this second.) Even if I didn’t particularly enjoy watching characters projectile vomit and defecate onscreen, I was glad that women were doing it. Scatological humor shouldn’t be reserved for white men, but for all the times I applauded the film based on its sociological achievements, I found it deeply unsatisfying artistically.

I would’ve loved to learn more about why Jessie and Angela were living in such disastrous conditions at age 17. I would’ve loved to know more about why drugs were the only path to bliss they could find. And I don’t mean it from a place of judgment, since the movie’s greatest asset is how matter-of-fact it is. I loved seeing two young women give zero fucks and live their lives to the best of their capacity.

But at a time when a large percentage of the people who live in the city portrayed in the film remain so indifferent to the pain being inflicted on the less privileged (the Galveston area went 60% Republican in the 2016 presidential election) it bothered me that I was asked to celebrate the selfishness of these characters, their utter contempt for the law, and their disrespect of people of color. (I don’t think it’s a coincidence that most of the people who the girls see as villains, including their boss at the diner, happen to be black men.) How am I asked to rejoice in teenage adventures when I know they are only allowed for people in a position of racial privilege? Whether male or female, perhaps the time has come to ask better from all of our white characters.

Never Goin’ Back is now in limited release.