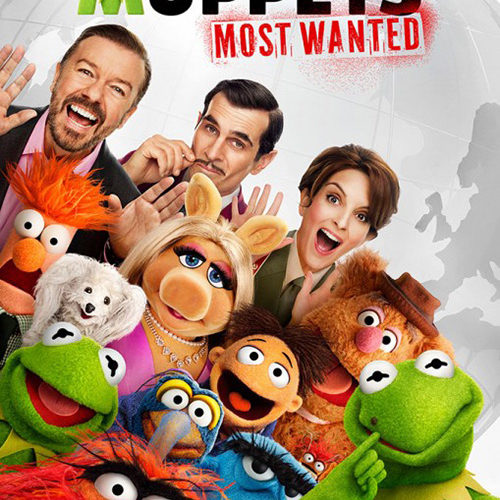 Is it a coincidence the Muppet renaissance follows the same trajectory as its subjects’ original cinematic saga? 2011’s The Muppets was enjoyable if not a tad overrated due to its story mirroring many of the beats that made 1979’s The Muppet Movie a classic. Revamping its road movie trope perfectly suited the need to reintroduce these iconic figures to a new audience ready to realize the troupe’s potential as they reunited for the common goal of putting on the greatest show in their history. You could sense the love and respect director James Bobin and screenwriters Jason Segel and Nicholas Stoller held for Jim Henson‘s source material and it’s therefore unsurprising Bobin and Stoller would pilfer a bit of the magic from 1981’s The Great Muppet Caper for their own sequel Muppets Most Wanted. A lot of what I disliked about the reboot dealt with how much time focused on the journey of human counterparts Gary (Segel) and Mary (Amy Adams). Their love story distracted from the titular heroes, jumbling our focus and emotions. What made The Muppet Movie great was its trust in Kermit and Fozzie taking center stage so the humans could remain purveyors of periphery jokes or stock villains to combat. Muppets Most Wanted goes back to this conceit by putting its felt performers in the spotlight so marquee names Ricky Gervais, Tiny Fey, and Ty Burrell can enhance rather than overshadow. It starts and ends with Kermit’s leadership and friendship being paramount to every action and hinges on the question of whether or not he can prevail after an evil doppelganger steals his identity by preying on the others’ vanity.

It’s the logical evolution of a financial hit and one songwriter Bret McKenzie jumps on with his ditty “We’re Doing a Sequel.” The gang got their mojo back and they’re ready to increase their exposure with a world tour. Kermit (Steve Whitmire) wants to stay grounded despite the excitement, but booking a German venue literally called The Hole in the Wall isn’t going to help morale when new manager Dominic Badguy (Gervais) procures them the national theater. What the gang doesn’t realize, however, is that Badguy works for the recently escaped criminal Constantine: an evil frog who’s identical to Kermit besides a bad accent and mole. By securing venues next door to art galleries, the traveling Muppet Show becomes the perfect front for him to thieve his way to London’s Crown Jewels. With Constantine and Badguy pulling the Muppets’ strings, Kermit gets imprisoned at a Siberian gulag with a glued-on mole incriminating him. We go back and forth between frogs as our hero holds out hope his friends will save him from jailer Nadya (Fey) and her merry band of convicts led by over-the-top cheese from Ray Liotta, Jemaine Clement, and Danny Trejo. Performance numbers abound as Kermit whips these murderers into shape for the gulag’s annual revue while Constantine allows Gonzo (Dave Goelz) to run with bulls onstage and Miss Piggy (Eric Jacobson) to sing Céline Dion to her heart’s content so he may partake in his dastardly deeds. Add Interpol Agent Jean Pierre Napoleon (Burrell) and CIA Agent Sam Eagle (Jacobson) to the case and receive antics, puns, songs, guest cameos, and a whole lot of fun in return.

The comedy is broad to tickle the fancy of children watching for easy laughs and parents looking for enjoyment beyond the surface. Sight gags, hammy accents, and a slew of familiar faces willing to trade celebrity for humor do well to keep the adults entertained as the plot provides little more than A to B to C situations propelling everyone to its inevitable conclusion. Constantine and Badguy dupe the impressionably naïve Muppets often, Kermit wins over his Siberian bunkmates with trademarked congeniality, and young Walter (Peter Linz) returns to serve as our surrogate into the action. And all the while Dr. Honeydew physically harms Beaker, Scooter plays director, and Statler and Waldorf heckle like they’re wont to do as Bobin and Stoller stay true to Muppet legacy by utilizing each character’s unique set of quirks. Kudos also goes to our main trio of actors performing with an effective pinch of silliness. There’s no lame “maniacal laugh” to roll your eyes at as Gervais’ villainy is written with a bit more nuance. He’s great at nudging the Muppets into doing his bidding with an infectious smile and trusting gaze all while building his resentment towards Constantine’s egomaniacal hubris. Fey is less antagonistic than blatant foil to Kermit so he may intrigue despite being miles away from the central plot. This isn’t a slight, she’s included to serve that purpose and she does it well. Never one to avoid embarrassment, she sings, yells, and swoons for the Broadway life of frivolity her job obviously rarely experiences. And Burrell does what he does best: goofily buffoonish elasticity placing him in situations earmarked for disaster.

Muppets Most Wanted embraces its absurdity and fearlessly allows its contrivances to shine—always playing for laughs above plausibility and never taking itself seriously. We know someone will eventually see through Constantine’s thinly veiled disguise and it becomes a sort of game wondering who it will be while Burrell and Sam bumble along in his wake. Staples like Animal get ample screen time, others like Rizzo quip about their excision from the spotlight, and it once more becomes all about Kermit. Lessons about love and friendship come in at the right moments, easy jokes at the expense of prison breaks and heist motifs hit their mark, and people like Stanley Tucci and Céline Dion steal the few seconds they’re given to run wild. I was trepidatious at first, but it appears Disney has things well under control.