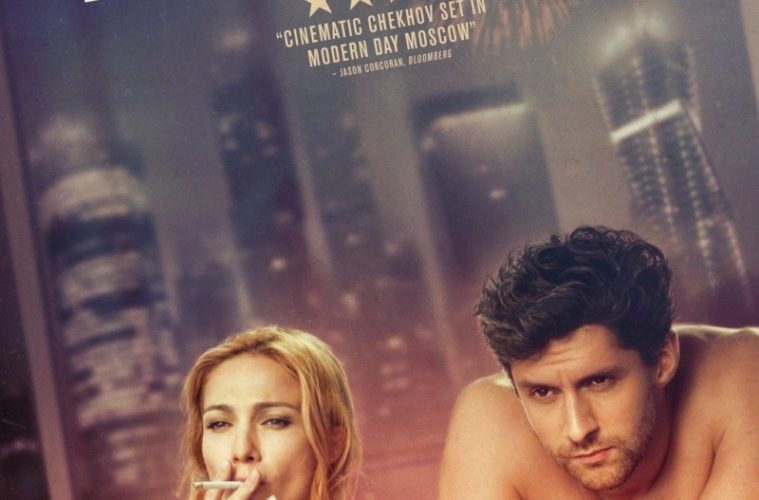 Writer/director Johnny O’Reilly found himself in Russia during college and decided to stay despite Hollywood opportunities after releasing his debut narrative feature The Weather Station. He sought to film a personal story set in his adoptive home Moscow, one that would touch upon its myriad complexities. So he wrote a sprawling character study following multiple members of and in close proximity to two families on the year’s celebratory “City Day.” Think Crash and its emotion-heavy propulsion, the whole steeped in slice of life observation rather than linear three-act plot working towards a single goal. Some will die by the end and others will discover what it means to live. Some will free themselves from shackles (physical and mental) while others discover they simply aren’t yet able to escape.

I don’t know about you, but that type of parallel optimism and oppression is exactly what I think of when the idea of Russia comes to mind. And as Moscow Never Sleeps shows through its use of celebrity, business, government, and poverty, the people residing within must combat this constant struggle between its ability to be paradise or prison. That’s not to say other big cities don’t bring that same type of atmosphere — their grandeur brimming with infinite possibilities just as the prospect of experiencing it all causes anxiety towards figuring out ways to make it staying there work financially, socially, and psychologically. There’s always this sense of compromise, of weighing the good against the bad. The same goes for relationships too, each simultaneously saving grace and crippling albatross.

If I were to choose a lead from both families I’d settle upon Yuriy Stoyanov‘s Valeriy and Anastasiya Shalonko‘s Lera. He’s the patriarch of his and she the young outsider transplanted into hers. He’s on his last leg, a famous career as a comedian coming to a close with doctors giving him weeks to live. She’s looking to begin her life, searching for an identity beyond “outcast” in her mother’s (Evgeniya Agenorova‘s Luba) new home with husband Vladimir (Mikhail Efremov) and step-daughter Kseniya (Lyubov Aksyonova) or “throwaway” as the estranged father she’s never met labels her via his absence. Both find themselves on an impromptu adventure courtesy of varying degrees of kidnapping, their eyes opened to life’s preciousness and the knowledge that tragedy doesn’t have to define them.

Everything expands out from them. There’s Valeriy’s son Ilya’s (Oleg Dolin) quest to win back his ex-girlfriend Katya (Eugenia Khirivskaya) who’s now with business magnate Anton (Aleksey Serebryakov). There’s Vladmir’s nephew Stepan (Sergey Belov) wrestling with personal demons as far as taking ownership in his marriage with Masha (Sofya Resnyanskaya) and his position as caretaker of Grandma Vera (Tamara Spiricheva). Add Kseniya’s adventures as a promiscuous teen living outside the rundown life her father can afford, a quartet of delinquent posers led by Rustam Akhmadeev‘s Arto wreaking havoc, Katya’s battle between love and security, and Anton’s pride exposing the difficulties of honest success in a corrupt city and you have a little bit of everything intertwining, overlapping, and often wholly isolated to earn its own bit of poignancy.

Credit goes to O’Reilly for finding a balance in order for no one thread to push the others aside. Some of the drama may be swept under the rug a bit too quickly — a fateful gunshot (or lack thereof) and potential rape amongst others — but this could be a cultural thing wherein the characters truly wouldn’t let what could have happened get in the way of what did. In some respects the film bears similarities to Go as well, its nightlife depiction of insanity arriving to infuse some humor to the otherwise weighty drama of an obvious patriarchal society rife with financial disparity. We can ultimately dismiss irredeemable characters as two-dimensional props because they succeed in assisting those we do care about with their personal evolutions through conflict.

What’s most intriguing, however, is that I found myself enjoying many of the periphery characters more than the main ones. How the two women in Valeriy’s life (Elena Safonova as his wife Natasha and Elena Babenko as his mistress Marina) cope with his ailment is much more authentically nuanced than the man’s search for a last hurrah. The strength and frustration of Luba dealing with a drunk husband and disrespectful step-daughter is more raw and devastating than watching Lera traverse the city since it’s her sacrifices that afford her daughter the opportunity to rebel. It’s these three women who are seemingly made to endure suffering for others that resonate most. They’re the unsung martyrs we can only hope will receive the appreciation they so beautifully deserve.

And the fact they do so from totally different worlds (Natasha and Marina living with means while Luba hides savings despite her cramped apartment in case things get worse) provides the spectrum of lifestyles Moscow offers as well as the reality that neither is truly more perfect or worse off than the other (beyond obvious class disparity). Everyone onscreen is searching for something: an escape from the past, chance at redemption, or hope for the future. It’s tragedy more than joy that brings many closer together than they ever were or thought they’d be as mortality finds a way to force people into recognizing what actually matters. You might not agree their choices, but you can’t deny they pick them with open eyes despite broken hearts.

The film divides their trajectories in two with expository introductions easing us into the massive cast opposite believable conclusions sparked by dramatic desires peering beyond easy answers. They’re separated by an intermission where half the characters are stuck in the citywide traffic jam signifying just how chaotic the evening’s festivities will become, a quiet moment of self-reflection to decide whether current paths are truly those they wish to follow. It’s tough to describe this movie as one marketing Moscow as a desirable place to be with so much heartache and tough decisions tearing heart from soul, but we definitely experience the breadth of its complexities and power. O’Reilly has crafted a meticulously drawn tapestry of universal human themes within a setting that’s as unique as it is familiar.