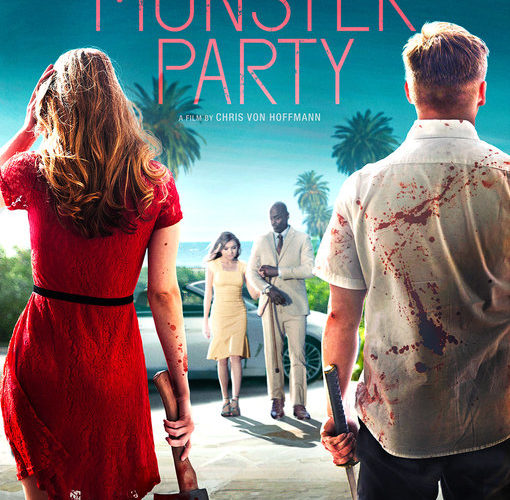 I have to think writer/director Chris von Hoffmann saw The Purge and wondered what could be born from reversing the good guy and bad guy roles. Those are generic terms of course since both movies ultimately contain bad guys and worse guys, but for the sake of argument we’ll say that the characters we’re supposed to hope survive are “good.” Rather than fear an impending invasion, however, the “good” guys in Monster Party are the infiltrators. A trio of two-bit thieves, Casper (Sam Strike) talks accomplices Dodge (Brandon Michael Hall) and Iris (Virginia Gardner) into crashing the latter’s latest mansion catering gig in order to steal enough Malibu elite money to save his father from a gangster’s grip. Unfortunately they don’t know what the party’s guests are celebrating.

Roxanne (Robin Tunney) and Patrick Dawson (Julian McMahon) are the hosts and their house is huge with a hidden safe and an electrical grid Casper just might be able to crack. They seem nice enough (see Erin Moriarty’s angelic daughter Alexis) with an edge of uncertain creepiness (see Kian Lawley’s toxic frat boy son Elliot oozing potential rapist out of every pore). So Iris gets the boys ready to serve champagne and hors d’oeuvres, flashes Mrs. Dawson a smile that everything will be okay, and tries to stay calm when Casper and Dodge start roaming the home to discover what they need to pounce. It’s only when company arrives that the creepiness begins to outweigh the nice with more drug-addled hotheads in fancy suits to amplify Elliot’s smarm. The wild card is Milo (Lance Reddick). Here’s the third adult amongst twenty-somethings riding in with a cane, grin, and way-too-young girl (Sofía Castro’s Becca) on his arm. He commands attention, glad-handing everyone as though the guest of honor or true man in-charge. Whenever someone goes too far with his aggression, it’s Milo who works to dial him back. And flaring tempers are constantly escalating as time goes by — enough so that dismissals of boys “letting off steam” become ignored as jokes early on. Eventually they all commune around the dinner table to speak about their sobriety from addiction while Casper and Dodge make their move upstairs. The abundance of cocaine and sexualized verbal abuse renders their demon of choice secretive until the first cold-blooded murder unleashes hell.

These people are the monsters of the title. They’re reformed murderers under the cult-like care of Milo, desperate to live the high life without threat of incarceration for new crimes or old. So who will set-off the inevitable chaos? Will Casper enter the wrong code and lockdown the house, blatantly telling the rest that someone isn’t who he seems? Or will one of these homicidal maniacs laugh their way onto another’s kill list just when restraint proves too difficult to sustain? What’s most interesting about von Hoffmann’s decision between these choices is that it doesn’t matter. Any of them can strike first or accidentally make a misstep while toeing a precarious tightrope as long as the murderous action commences. How it starts is secondary to how it proceeds. We’ve bought our tickets to watch the carnage and enjoy the glorious viscera spraying walls while those wielding hatchets, chainsaws, and samurai swords jump up and down with glee. Why Casper and Dodge have joined Iris in this mansion of horrors is therefore inconsequential beyond proximity. We can completely forget about Casper’s father’s dire straits because he’s out of sight and out of mind, a pawn pushing them to engage in a heist above their experience level with no time to create a plan. Dodge and Iris being a couple helps set-up animosity with the guests and perhaps foreshadows Death #1, but it’s all just noise to place each character in the position that best serves their bloodlust. The question becomes whether the intruders can match that malice.

There are surprises along the way with frightening howls coming from the basement (where Mickey the “dog” is secured for safety reasons), a locked closet of weapons, and cooler heads trying to put a lid on the violence before things get out of hand. Remember: these are sober “monsters.” Milo can deal with one relapse, but allowing that initial blood to whet everyone else’s appetite for more will quickly see him losing control of the situation. While some guests have the strength to keep their hands clean and a couple the remorse to even offer assistance to those members of the thieving trio that are still breathing, most simply see the devolving situation as perfectly suited to a release of their pent-up rage. Sometimes withdrawal is too much. The filmmakers aren’t averse to gruesome fatalities as limbs are chopped, heads split open, and jugulars sliced to erupt in crimson. You have McMahon looking at potential victims with a sexualized hunger while Reddick gives his patented glare to make those ready to slip back into old habits fear retribution. Hall, Gardner, and Strike each do innocent helplessness well as their attempts to stand their ground often lead to them tripping over furniture or letting go of weapons once the psychopaths rushing towards them without pause make contact. We need the attacks to increase in frequency with little breathing room because Monster Party‘s success comes from our being too wrapped up in the brutality to question logic. Emotion must become liability so more bodies can fall than tears.

And in the end that’s exactly what happens. We assume who will align themselves with the victims and predators pretty easily, but that’s forgivable since infighting stops Casper, Dodge, and Iris from being solely responsible for taking out the serial killers. Letting the “monsters” dispatch each other lets our “heroes” retain their fear and expendability — they can die when you least expect it because they aren’t our only means towards victory. This universal animosity keeps things interesting so the battles can be short and sweet without any monologues extending the opportunity for table turning. I could have done without a super destructive epilogue that only works because the credits stop von Hoffmann from having to create an exit strategy, but this film never really cares about consequences anyway.