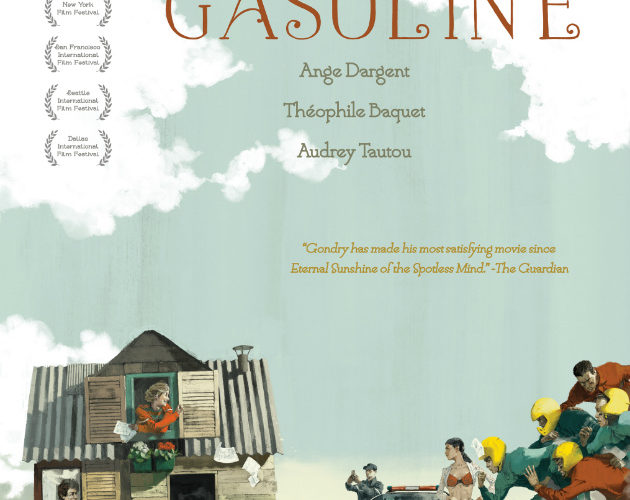 The two boys of Microbe and Gasoline are pre-naturally wise, casually uttering profound truths about sadness, pain, and time, but the smartest observation comes when one says, “I can’t decide whether you’re a genius or an idiot” to the other. The answer is a mixture of both, and that’s the beauty of Michel Gondry’s interpretation of the classical coming-of-age story: over and over, Gondry allows his characters to fail, but he doesn’t use these sequences as signposts about cosmic consequences. Rather, it’s a thoughtful recognition that growing up isn’t a series of wish-fulfillment scenarios, but a time to fall on your face and pick yourself up.

Daniel (Ange Dargent) is a soft-spoken, shaggy-haired-artist-type who gets along better with his crush, Laura (Diane Besnier) than the other boys. He’s treats the present with a wistful resignation, but he’s barely able to deal with the pressures of his depressive mother, Marie-Thérése (Audrey Tatou). Théo (Théophile Banquet) is a natural best friend — a new arrival to school who brashly showboats on his motorbike, earning the derogatory nickname, Gasoline, and faces different but comparable circumstances with his parents at home.

Théo cleaves closest to Gondry’s previous directorial preoccupations, treating every new day as its own performance piece. In one of the most memorable scenes, and an early moment of chemistry between the two budding best friends, Théo is the only person who comes to Daniel’s art show. What could have been a moment of melancholy becomes a dalliance into impromptu artistry as Théo glides through the gallery space, dancing around invisible people’s feet as if following a nonexistent Samba.

It’s a scene that fits snugly into the perceptions of Gondry as a filmmaker. He’s a director who’s been dogged by accusations of quirkiness for quirkiness’ sake, and while some of the director’s films are more notable for their stylistic novelty than their narrative richness, Gondry’s been underestimated in recent years. While certain tics remain, Microbe and Gasoline is much less concerned with surrealistic wonder than paying homage to the French New Wave and offering a practical form of magic.

For much of its first half, Microbe and Gasoline feels uncharacteristic, honing in on the evolving friendship between these two boys and their expanding views of a tragically real world as they navigate miserable school days, awkward parties, and oppressive parents. He presents the friendship with a candid honesty as Daniel asks Théo about everything from love to jerking off to his winding identity. They’re the type of best friends where each conversation makes the universe a little less unknown, and Gondry has an immediately apparent skill for writing dialogue that feels both fizzy and fluidly purposeful.

Calling back to French New Wave luminaries, Daniel and Theo cycle through a series affectations that are more appropriate for Jean-Luc Godard’s vulgar aesthetes or Louis Malle’s affected romantics than a pair of kids who supplant their reality with a more desirable one. And Gondry finds plenty of room for winking non-sequiturs: Daniel describing his tendency to lull himself to sleep with a song, or a split-second character betrayal that’s described in real-time.

Microbe and Gasoline is amiable, but it rarely pushes far enough to understand these kids beyond their anxieties about the future or their realizations that growing up means pushing away nagging doubt. And, as the film enters the last reel, it becomes clear that this whole journey was just a structural delay from the hard edges of reality. A late scene involving a backwards plane ride particularly feels like a course-correction into the intended tonal path rather than a graceful conclusion. Microbe and Gasoline reaffirms that Gondry has a talent for visually dynamic work about the losses of growing up. Like a faint childhood memory, the film feels formative, but inconsequential.

Microbe and Gasoline is now in limited release and expanding.