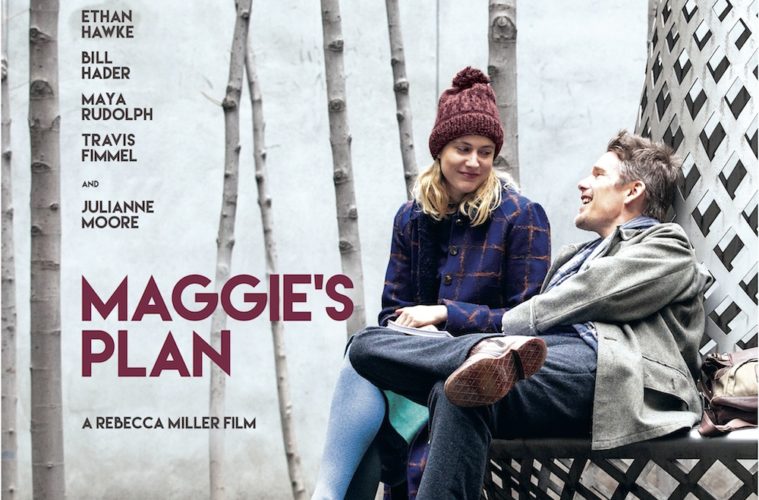 There is a moment early on in writer/director Rebecca Miller‘s Maggie’s Plan in which the titular Maggie (Greta Gerwig) and John (Ethan Hawke) trade their respective titles at New York City’s The New School, and proceed to describe what exactly they mean. It’s a scene full of big words and fast talking, most of it sounding a little ridiculous and plenty smug. These characters seem to half-understand how insulated their world is, and we’re meant to laugh both at, and sometimes with, them.

Delightfully silly turns from Julianne Moore (sporting a Nordic accent) and Travis Fimmel (Warcraft) playing up nearly every hipster trope (the man sells artisan pickles, for God’s sake), reinforce the modern-set slapstick comedy Miller is crafting here. The central conflict involves Maggie and John falling in love, breaking up John’s fledging marriage with Georgette (Moore) and complicating Maggie’s initial plan to get pregnant through a sperm donor named Guy (Fimmel). Soon enough, Maggie and John have an unhappy marriage all their own, with a new child to boot. So a fresh plan emerges, in which Maggie will attempt to get Georgette and John back together. Despite warnings against it from her friends Tony (Bill Hader) and Felicia (Maya Rudolph), Maggie can’t help herself from becoming a make-shift Emma Woodhouse. Gerwig has played this type before – Frances Ha comes to mind –  but never with this much dynamism. She and Hawke play off each other’s insecurities in a way that feels exact in its rendering. Consider a scene where Hawke’s John gets down on his knees to profess his desire for Maggie. It’s ultimately a seductive moment, but one in which this married man is literally begging for it, a move that returns later on. Miller has built a career on complicated, conflicted female protagonists, from Pippa (played by Blake Lively and Robin Wright) in The Private Lives of Pippa Lee to the coming-of-age Rose (Camilla Belle) in The Ballad of Jack and Rose. Gerwig’s Maggie fits right in. At first a muse to John and his fledging fiction writing, Maggie evolves into the capable individual she hoped she already was.

Though things get a bit long in the tooth after a certain late reveal, the final stretch proves to be the funniest. Hawke has seldom been better than he is here, and Moore chews scenery better than most. Miller’s New York, full of academics who still have the capacity to act like children, isn’t exactly new, but plenty fascinating.

Maggie’s Plan is now in limited release and expanding.