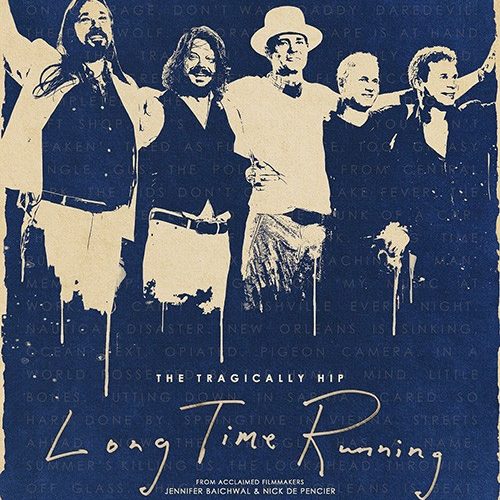 Review: ‘Long Time Running’ is a Fitting Farewell for The Tragically Hip

Beyond the tragedy of Gord Downie’s terminal cancer diagnosis on a personal level for his friends, family, and The Tragically Hip bandmates, the idea that we would never again hear his voice sing “Bobcaygeon” or “Courage” live meant his nation was losing its first legend of rock and roll. Considering how many of our greats were cut down by drugs, accidents, or age, the end of “rock eras” so to speak have become commonplace here. But KISS, Rush, Neil Young, and others still tour. Canada has been fortunate until now.

It’s therefore all the more tragic that the first to go would be younger than each of those 70s superstars. Downie and The Hip were no less prolific, though—his death at age 53 was a young marker considering his debut was three decades and twelve albums ago. This is why their farewell tour inevitably sold out in minutes for every stop. It’s why more seats needed to be added to venues. And why screens popped up all across Canada (as well as cities in the United States, my hometown of Buffalo, NY included) to make certain every fan nationwide had the ability to celebrate this bittersweet occasion that would prove to be the final Hip show ever on August 20, 2016 together.

I watched at home, my proximity to Toronto putting CBC TV in with my local cable package. But while seeing this Kingston, Ontario (the band’s hometown) performance live and in full was perhaps the most fitting way to say goodbye, it wasn’t the whole story. That show was a year in the making filled with worry, surgery, and memories met by an outpouring of love. It was therefore put in Jennifer Baichwal and Nicholas de Pencier’s hands to capture the journey as the catharsis it was for band members and fans alike. The result is Long Time Running, a documentary serving as both a career retrospective with brief snippets of history through interviews and a behind the scenes look at a true farewell tour with no turning back. Not to make light of the situation, but it’s very Canadian to say goodbye face-to-face on one’s own terms. Rock outfits rarely have this opportunity due to break-ups, egos, overdoses, or waning interest. The Hip’s end is therefore even more special because those issues were never truly a possibility. Gord may have always been the face of the band, but he owned a fifth stake in the profits just like the rest (guitarists Paul Langlois and Bobby Baker, bassist Gord Sinclair, and drummer Johnny Fay). They were brothers who knew each other from a young age and it seems as though none could ever fathom continuing without this original line-up remaining intact. So while this tour centered on Downie for good reason, a chapter was closing for all.

Baichwal and de Pencier do well to get this truth across, ensuring their film doesn’t lose its way and become a Gord Downie showcase. That’s not how the band operated and shouldn’t be how we remember it in the end. While physically and emotionally ambitious for the frontman who literally had part of his brain removed, the others were also impacted. They feared what this arduous cross-country trek would do to their friend. They questioned whether he could survive it, six teleprompters helping to remember the words or not. No one could guarantee Gord wouldn’t pass out, have a seizure, or simply lose the strength to keep singing. Suddenly a celebration could turn into a memoriam and everyone with a camera phone would throw privacy out the window.

But that was a risk Downie was willing to take. And once we move past the doctor talk and what-ifs as the band approaches its first stop in Victoria, BC, we can begin to acknowledge the healing power absorbed every step of the way. The filmmakers show Gord’s wardrobe and hats being made, rehearsals, and post-show appreciation from fans retrieving set-lists and guitar picks thanks to a long-standing Hip crewmember. We see the band laughing and dancing as the cities change, the music an afterthought when compared to the joy experienced on this final ride. They each talk about their anxiety and worry in hindsight, but we see none of it onstage. At a certain point the electricity of the moment carries them forward for one last bow. Some might say it was a mistake, but I really like how Baichwal and de Pencier focus solely on the band. They let this film be about The Hip saying goodbye to a period of their life that defines them rather than those countless strangers impacted by the music. To constantly interview fans would merely turn a document of hardship, perseverance, and release into heartfelt platitudes that eventually start to feel hollow. So we don’t really hear from fans until the build-up to Kingston and even then mostly just via singing as “Ahead By a Century” seamlessly cuts between stadiums and venues to express this group’s massive simultaneous reach. Ultimately we’ll always have the music. What’s going away is the band, something they feel much more than us.

Maybe a documentary about The Hip’s fandom will come in the future, but right now the story that matters most is the band’s tragic yet empowering dissolution. It’s about five guys digging deep into the well to play songs from albums they’ve forgotten, propping each other up during a trying emotional time, and finding a sense of closure their occupation rarely affords. Will the film hit as hard for those who have never heard of the band? No. But the unique story at its back with Gord’s illness and post-surgery tour is enough to pique interest and expose new audiences to their music in the process. With major sequences featuring songs like “Grace Too” and “Ahead By a Century” almost in full, I don’t see how it won’t.