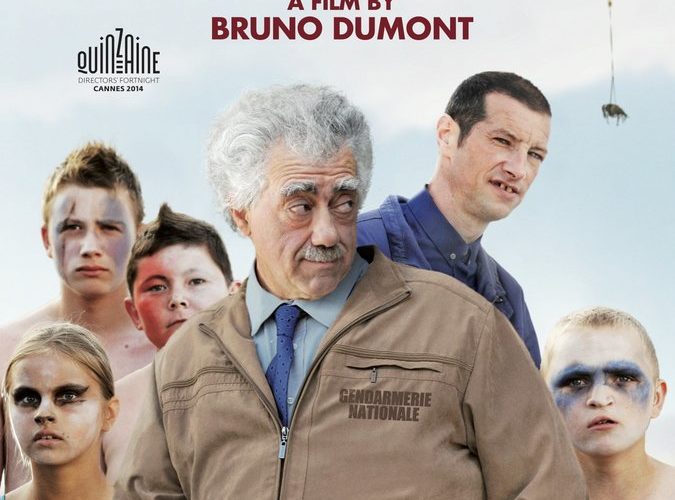 There is much talk about whether Li’l Quinquin, the latest from Bruno Dumont (Camille Claudel 1915, L’Humanité, Flandres) is a TV series or a film. It was commissioned and made as a four-part series, and Dumont has stated in interviews that he was told not to have too many long shots because they do not play as well on TV (never fear: the mixing of medium-long tracking shots and static close-ups is well-executed). But the work is also receiving theatrical distribution in the United States and being treated as a film by many, no doubt because of the name attached to the project, and on account of personal biases as much as for the uniformity of production and method of storytelling. Still, the episode splits are obvious and clearly titled, though these markers could just as well serve as chapters, given that an episode’s first shot seems to be in sequence with the previous episode’s final shot. Practically speaking, either viewing method would likely work fine. Each episode / chapter balances a pair of cops investigating a crime wave — kicked off and defined by bodies being found in the stomachs of dead cows — with the misadventures of the troublemaking titular boy (Alane Delhaye) and his cronies, most notably his intelligent and behaved girlfriend Eve (Lucy Caron). This makes them quite similar, but the humor, pacing, and quickly mutating repetitions of behavior make it equally palatable for film viewing. In an age of Netflix-, Hulu-, and HBO Go-sanctioned binge-watching, Li’l Quinquin is the equivalent of about four episodes of Orange is the New Black, so it’s probably better to watch it all at once to catch the details, as repetition with variation does not play as well to viewing breaks and forgetful memories.

With each subsequent episode/chapter, the prejudices and shortcomings of the characters are revealed. The two cops, Captain Van der Weyden (portrayed by Bernard Pruvost and named after the Flemish Primitive painter known primarily for his religious works — do a little research before watching this) and his sidekick, Carpentier, begin as likable cops, but both are quick to show prejudices against immigrants in general, Arabs and Muslims in particular. Quinquin, too, comes off as disruptive, more a nuisance than a problem, but by the time racial slurs begins to fly out of his mouth it becomes harder to identify with him. Indeed, Dumont’s writing and storytelling are top-notch: slightly out-of-taste jokes, crude language, and inconsistencies create a feeling of something being “off,” and then particularly trying moments jumping out until these retroactively define the characters rather than seeming out of character.

Just as important to this is the casting and performance: Although I can’t find anything definitive (my French is not good enough), I’m reading a lot suggesting Pruvost has a disability and that Van der Weyden’s facial tics — heavy blinks, quick cocks of the head, and the like — are not performance. This wouldn’t be the first time Dumont has worked with a non-professional, impaired actor, nor would it be the only one in this work, but, regardless, it’s a case of cinema’s (or moving images, if one must differentiate between TV and cinema so steadfastly) hyper-semiotics at their best: anything placed or happening in front of a camera accrues additional meaning within the diegesis. Dumont is also smart not to signpost any of his major themes. Sure, racism and religion are important, but one must connect the dots to see that this isn’t Dumont, Atheist coming down on religion as much as it is Dumont, intellectual lamenting an institution, way of thought, and pattern of behavior that leads to something that looks like “religious fanaticism.” Likewise, his handling of Quinquin, a child and thus the future of France, is cautious and ambivalent. On the one hand, his genuine tenderness and shyness around Eve give the audience hope that he will outgrow his bullying habits; on the other, watching the older generation (and particularly those who are supposed to represent law and order) be racist in their own ways is not encouraging. What begins as an aggressive use of racial slurs will soon be “outgrown” to a more repressed, socially-acceptable form of racism. It is further disheartening that one of Quinquin’s first lines is asking Eve (jokingly — at least, we assume) if she wants a dead mouse he found to be stuffed up her butt. Given the role that stuffing dead humans up an animal’s butt has in the film, it’s difficult for viewers who remember this throwaway detail from the first episode / chapter to get it out of their minds as Quinquin becomes less and less sympathetic. But both Quinquin the romantic, who comes back strong in the film’s final act, and Quinquin the tough-guy seem to be performances, roles he finds himself needing to play.

This may sound heavy, but it is all achieved through a surface irony and lightness. Li’l Quinquin resembles nothing if not Twin Peaks, also an affair-ridden detective show about a murder shaking up a community and the quirky cops charged with uncovering it. As in Twin Peaks, there are elongated, seemingly unnecessary, but crucial scenes that are played for zany, almost surreal laughter. None is more memorable than an early incident at a funeral, which is here marked by the clergy that can’t keep a straight face and a sincere but out-of-place solo a capella performance by Eve’s sister. Another scene sees Van der Weyden being visited by his superior in a restaurant, but the camera repeatedly cuts away to show a couple having difficulty dealing with their mentally handicapped son during a meal. The narrative purpose for this scene, no shorter than any other, is nil, but Van der Weyden and Carpentier have a short conversation thereafter about what they saw, and their dialogue is revealing both of character and the story’s overarching theme of familial and inter-generational responsibility. The importance of these moments and of throwaway jokes accumulates slowly but surely, although it is not until the final hour or so that the gravity of what’s at stake becomes apparent. The central whodunit is, by this point, almost an after-thought; the peripherals of Li’l Quinquin’s unnamed, vaguely defined world are so sharp that they overshadow the narrative mystery. When Dumont turns to Bach’s BWV 46 — a programmatic Church cantata — he’s clearly not marking off a particular scene as narratively crucial, but is rather turning it into a moment of thematic and spiritual significance.

It’s difficult not to be impressed by the subtlety of what Dumont has done here. He parodies a procedural without taking weight away from the actual crime at hand, and he allows characters to slowly show themselves to us — not through a series of escalating events, but rather by riffing on the same thing repeatedly. A body turns up, the cops do their questioning and theorize, barely making visible progress; Quinquin passes time with Eve and bullies those he can with his buddies, never actually getting into hot water or seeming particularly threatening. He lets a scene play out a little longer than is narratively necessary to showcase character habits: Van der Weyden always announces that it’s time to exit by telling Carpentier “let’s roll,” while Carpentier prefers to drive in a complete circle when making that exit. They also tend to refer to “The Devil,” but one can’t help but wonder if Dumont’s Atheist side is using the title “Allahu Akbar” to suggest that it may be the old-testament God, punishing residents — and France, by extension — for its vices. Whatever the case, Li’l Quinquin exists to suggest and provoke rather than declare, and is all the better for it.

Li’l Quinquin is now in limited release and available to stream on Fandor.