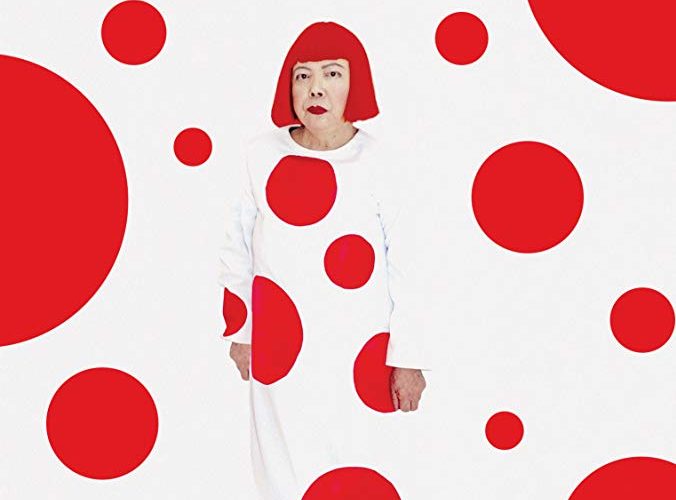 When making a documentary chronicling the life and work of an iconic artist it is necessary and downright vital to interrogate why their art struck a chord in the first place. It is not acceptable to present things in a matter of fact way that is no different from reading about their life on Wikipedia. The genre of documentary filmmaking often settles for what is expected instead of bursting the formula of “interview-clip-interview” wide open, making for a sameness that is only disrupted in the differentiation in subject material–but the subjects need better, more daring treatment. This is especially the case if we are talking about an artist as revolutionary and vast as Yayoi Kusama.

Director Heather Lenz’s Kusama—Infinity settles for the typical construction one finds in most documentaries. There’s plenty of archival footage, arranged chronologically, interspersed with interviews here and there stressing the importance of Kusama’s work while also barely gracing the surface of what Kusama’s work is, or why her artwork was contextually and personally vital. The best aspects of Lenz’s construction are when she merely lets Kusama’s art do the talking by letting viewers feel what her infinite, minimalist spaces reveal. This, however, is hardly an accomplishment, because the same effect could be achieved by purchasing an artbook of Kusama’s work or visiting an installation of her output in a museum. Formally, we have to ask ourselves: what is then the point of refusing to dig deeper? It’s obvious that Yayoi Kusama is a breathtaking, groundbreaking artist who shattered any preconceived notions people had about her in the 60s, but again, I ask, how is that being communicated through the documentary form? We’re told Kusama is a legend and her art speaks for itself, but the film doesn’t have anything of importance or revelation to say about what Kusama’s artwork means in the terms of abstract emotion.

Where Lenz’s film fails is in its inability to remark upon anything in the abstract qualities of Kusama’s work beyond talking about it only in its historical importance or the most obvious interpretation. This is a failure when one considers Kusama’s legacy is in infinity nets (vast fields of polka dots) that were brought on by her own history with hallucination. Kusama’s infinity nets beg us to see what is beyond and engage with her artwork in an intensely observational manner. By creating these sometimes 30-foot-long canvas paintings of polka dots, her work achieves something resembling a trance-like state.  It could be a total void or the possibility for everything, and thus clashing with our own anxieties toward life and death, the beginning and the end of all things. Reminiscent of Stanley Kubrick’s “Beyond the Infinite” section of 2001: A Space Odyssey, Kusama’s work begs for a formal realization that is similar to the director’s experimental ingenuity when he plunged into the unknown of space. Kusama is not ordinary, so why make an ordinary film about her?

There are obviously great films in the genre that follow the chronological “clip–interview–clip” dynamics, but these films tend to be exhaustive and are constructed in a way that rings more essayist than power point. Take, for example, OJ: Made in America or any of Ken Burns’ documentaries, which begin with simple set-ups and play things out in a way that’s comfortable before pulling the rug out from underneath viewers when the true thesis of the film comes to light, which usually forces one to confront problems within themselves. Shedding a light on someone who overcame oppression to become one of the single most popular and vital artists is undoubtedly important, but in Kusama: Infinity, we do not get enough contextual information for that point to be made strongly. The argument for why Kusama’s art is worthy of such considerations is simply not present in Lenz’s directorial form.

It starts out strongly enough with a discussion of Georgia O’ Keefe’s, Black Iris, juxtaposed alongside Kusama’s childhood of physical abuse. Lenz leans into the pitch black of the iris, while in voiceover there is a statement that Kusama related heavily to the center of the painting. It’s an inspired choice, which gives us context for why and how Kusama reacted to art, how her art was inspired by her abusive childhood, and how she carried on a history of women artists supporting and finding inspiration in the work of each other. If the film had kept up this kind of interwoven density Kusama: Infinity would be something special, but it does not. At some point, we have to ask more from documentary filmmaking.