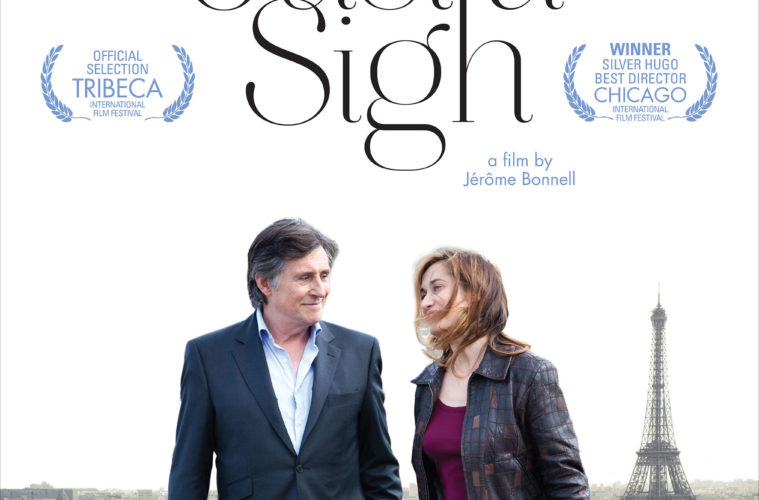 A captivating romantic adventure, Just a Sigh resonates with a radiant performance by Emmanuelle Devos as a beautiful middle-age actress who spends an afternoon exploring Paris unburned by a cell phone and apparently with an overdrawn bank account. What follows is rather mysterious: making eye contact with an intriguing stranger on a train from Calais (where she lives with her lover, a documentary filmmaker) to Paris, she becomes intrigued. The stranger is an Englishman named Douglas, played by Gabriel Byrne.

Written and directed by Jerome Bonnell, Just a Sigh is an intriguing story told with maturity, restraint and occasionally humor. Devos, who physically reminds me a bit of Greta Gerwig, stars as a different take on what Gerwig would do in a film with a similar plot. Devos’ Alix is certainly aware of her presence, nailing an audition for a casting assistant, who does so without asking for her age. Stumbling through Paris she reencounters, perhaps stalking, Douglas giving way to a meeting that is later restaged in the course of the afternoon. While we watch the film we perhaps conspire with Alix as Bonnell employs a rather lucid structure. Too old to function as a manic pixie dream girl, she harbors a secret that is perhaps a lie built upon excellent performance. She is in command as the film breaks the traditional gender norms usually standard in this genre. Sublime in its performances, perhaps only Douglas is a bit too dry. Keeping a distance, Sigh functions in rather a fascinating way; it’s aware of its voyeurism and Devos seductively moves through the space as a kind of pro. As an actress Alix is engaged in an exercise wandering from point A to point B, inserting and retreating from situation to situation.

Just a Sigh is a complex and pure character study and while sparse, Bonnell takes a large risk, as he is simply content to watch Alix, with scenes that, for the most part, remain restrained until the film’s less subtle comic moments. Such scenes break with the lucid structure, plunging the film back towards realism, including a scene in which Alix begs her sister for money (remember, her debit card has been declined throughout the film). Some moments venture too deeply into broad comedy, including one physically comic moment that seems more or less the kind of thing you’d expect from the aforementioned Gerwig.

A complex experience, the pleasure of Just a Sigh exists mostly in its visuals, tonal shifts and performances. Perhaps the day we are permitted to observe is simply a “side-trip” in more ways for one for Alix, and the picture offers no easy answers while remaining curiously captivating and engaging.

Just a Sigh is currently playing in New York.