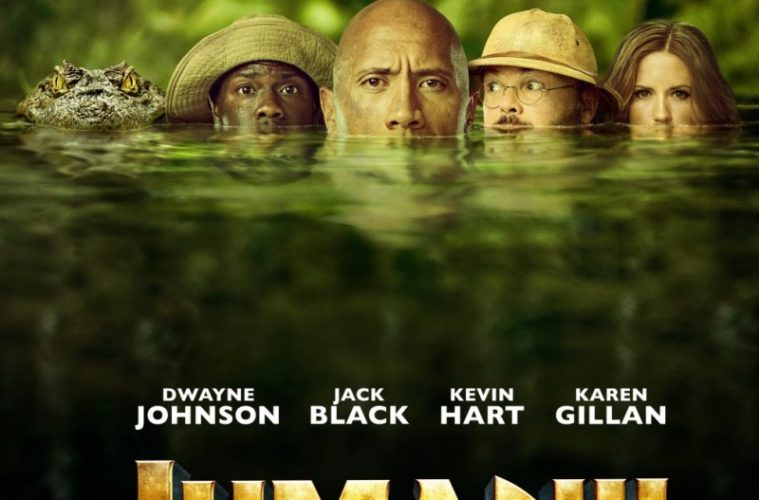 After Steven Spielberg and company broke visual effects barriers with Jurassic Park, two years later, 1995’s Jumanji brought more large-scale, creature-focused thrills to theaters. Directed by Joe Johnston–who would go on to get his own crack at the dinosaur franchise a few years down the road–the Robin Williams-led adventure occupies that rare subset of oft-replayed, worn-down VHS tapes from childhood that one might be hesitant to revisit for fear of the nostalgic charm wearing off. In many ways, the set-up of Jumanji: Welcome to the Jungle may quell some trepidation in this regard.

Functioning as a sequel rather than a reboot, there’s gratefully no CGI recreation of Robin Williams (in fact, only a brief reference), an altogether different setting as we go into the game rather than vice versa, and more modern concerns in virtually every aspect (Yes, “yaaass queen” is uttered during an action scene). After a brief introduction in 1996 to show that Jumanji, the board game, has evolved into something teenagers of that time are starting to care more about–a video game–we jump to the present day.

We meet our soon-to-be-Jumanjized characters: the nerdy Spencer (Alex Wolff), who’s doing homework for the jock, Fridge (Ser’Darius Blain), the social media-obsessed popular girl Bethany (Madison Iseman), and Martha (Morgan Turner), who prefers getting prepared for college rather than than going to gym class. Conveniently, they all get the same detention sentence which leads to the discovery of the old Jumanji videogame, and, boom, welcome to the jungle, as the bland title spells out. Director Jake Kasdan, who has shifted from the likes of Orange Country and The TV Set to broad, four-quadrant studio features as of late (Sex Tape, Bad Teacher), continues down that path here. Speeding along at a brightly-colored clip, nearly every beat of this Jumanji sequel is directed with a perfunctory touch aimed to please the most average of test audiences. Even its design, ripping off Mad Max: Fury Road in one setpiece and attempting to bring back some memories of the rhinoceros rampage in its predecessor, has too glossy a sheen to enact much tension. Despite a lack of imagination in this aesthetic regard, the adventure rides on the charisma of the ensemble, who milk the body-switching situation for all it is worth.

Johnson’s character is branded with the ability to smolder at will, yet still has a never-been-kissed sheepiness. Paired with Hart, their Central Intelligence dynamic is fully carried over. Gillan, who has defended her character’s appearance after incurring claims of sexism, still feels objectified when compared to her male co-stars. While she has a few impressive action sequences thanks to her skill of “dance fighting,” a burgeoning relationship with Johnson’s character feels under-explored and regressive. One could only imagine if this was in the hands of, say, David Cronenberg, how deeply explored the psychological toll tied with this body-swapping would be. Instead, this is a movie where Jack Black looks down at his penis and squeals with a peculiar excitement as he uses it for the first time to pee.

Despite its uninspired backbone, Jumanji: Welcome to the Jungle could be considered one of the more engaging video game movies, albeit not being based on an actual video game. Eschewing the current trend of “gritty” takes in this subgenre of blockbusters (see: Assassin’s Creed), it is charming from the get-go and embraces the inherent goofiness of its concept. When it comes time for the requisitory exposition dump, it’s made a gag, doled out by an NPC (non-player character, for those who haven’t spent hours with a console). This thin level of artifice and self-awareness is enough to set it apart from its blockbuster brethren who take infinity stone gathering, the equivalent of leveling up, and boss battles with a certain air of self-important gravity. This a tentpole that recognizes once you hit the start button, you’re hoping for a mindless, entertaining time, and, in the end, you won’t feel like you wasted one of your lives.

Jumanji: Welcome to the Jungle opens on Wednesday, December 20.