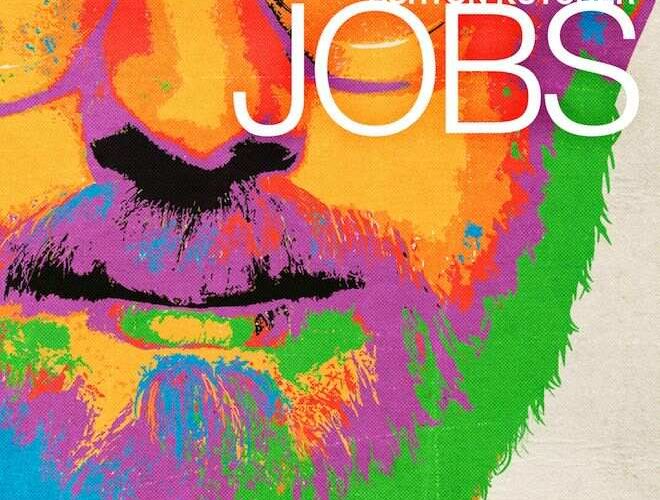 Jobs is the kind of biopic that I arrive at with baggage; while I did not personally know Steve Jobs, I’ve been a follower of his life, from his famous product keynotes at Apple to Walter Issacson’s excellent biography. Joshua Michael Stern‘s biopic is not terribly insightful, but it’s a film that knows what it is, just a notch above an original cable movie. The script, by Matt Whitele, brushes over some key biographical moments and along with its lead — Ashton Kutcher as Jobs — it lacks the pretensions of a studio prestige film.

Steve Jobs had such a rich life that perhaps he’s worthy of a mini-series, but at 122 minutes, Jobs cracks the surface without really developing characters, such as Lisa Brennan-Jobs (his daughter, whom he practically shunned, before later reconnecting with), as well as his team. Perhaps the approach in dealing with this material is to focus on a narrow part of his (and Apple’s) life, as a whole movie could be made about the start up days in the Job’s family’s Los Altos garage — but this is not that movie. In an attempt to be first it, bites off more than it can chew, with a script that feels underdeveloped and overwritten. Kutcher’s Jobs says the kind of things the man would say in interviews in every day conversation, not an elegant way to develop these characters. I don’t know if his initial meeting with industrial designer Jonathan Ive was as magical as its portrayed here, but the dramatization is bland and on the nose. Ive, played by Giles Matthey, is curiously the “new” Apple breed of management we see, with Phil Schiller and Scott Forstall curiously missing.

While Jobs never becomes dull, Kutcher is a little uneasy at first, in an awkward opening scene, introducing the iPod. The film is largely focused on the transition from garage start up to his ouster from the board, but it lacks the elements of political thriller. As a pure character study, a film is only as good as its lead, and Kutcher is fine when given the right material. He’s surrounded by capable performances from the managers who attempt to reign in Jobs, including J.K. Simmons as Arthur Rock, Matthew Modine asJohn Sculley and Dermot Mulroney as initial investor Mike Markkula, as well as Josh Gad as Steve Wozniak (whose story, captured in his 2006 biopic iWoz, would also be deserving a movie).

It’s the script that could have used a little more polishing, as it’s fond of lightbulb moments, dramatizing Jobs’ most iconic speeches with a certain predictability. While entertaining, the film doesn’t achieve the ultimate goal of Steve Jobs’ work: to make the things that matter beautiful and to find beauty in the small moments.

Jobs is now in wide release.