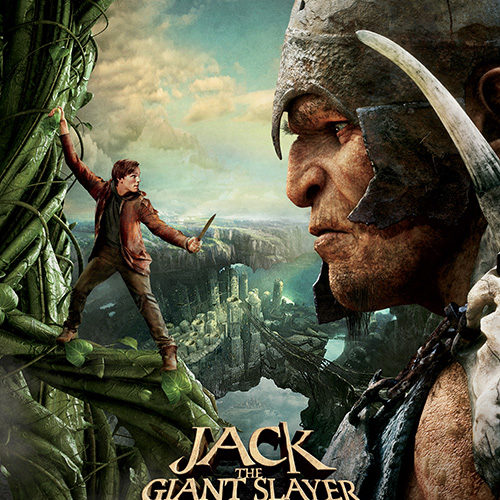 What do you get when you combine the English folktale Jack and the Beanstalk with the more violent Cornish fairy tale Jack the Giant Killer in an age where computer animation pretty much allows anything to be possible? Bryan Singer’s Jack the Giant Slayer, of course. A film that has traveled through many hands—Darren Lemke wrote the original script, David Dobkin has a credit, D.J. Caruso was once attached to direct, and screenwriter Christopher McQuarrie reworked the tone and plot to where it is today—I never imagined the finished result would entertain as much as it does. Unfortunately, however, the film is still very much skewed towards children despite a desire to be ‘more adult’ and its PG-13 rating risks hurting its chances of finding that audience. Like the concepts behind King Arthur and Troy, Jack the Giant Slayer looks to transfer its fantastical elements into the real world. What if years ago there lived a king who forged a crown to control an invading horde of disgustingly brutal giants so he could send them home and protect the world from abject destruction? Such tales would be too unbelievable for the history books and therefore left to languish in the annals of morality plays and children’s dreams. Only someone not quite right in the head would investigate further into his adult years to discover relics of such an age. Only a power-hungry psychopath would be unhinged enough to bring those past horrors to light by inviting the mythical beasts from the sky back down to civilization.

So, laid atop the version we all know and love of young Jack (Nicholas Hoult) needing money to keep his family’s farm afloat is a similarly disparaged young princess with desires for more than the life her lineage provides. Both Jack and Isabelle (Eleanor Tomlinson) were read stories of the giants and King Eric’s heroics defeating them as children, each holding onto its adventurous spirit tighter than most society deems appropriate. Where Jack’s uncle currently pushes him to be responsible and frugal after his father’s death, Isabelle’s dad is forcing her into marriage for a future as queen now that his own has passed on. It’s no surprise then that they should meet during a carny play in town depicting the fairy tale they hold so dear with memories of love taken too soon.

The paralleling of their lives is made apparent early on as we watch a fun crisscross of little Jack and Isabelle in bed at their respective homes hearing the myth. Destined to find one another, the stipulations of their blood preventing the former from becoming a member of the royal guard and the latter from loving outside her social class can never be as set in stone as the older generation believes. No, through fateful coincidence their paths converge on a grand-scale courageous journey to new lands possessed of dangerous stakes so they may prove their worth and alter tradition. When a battalion of seemingly undefeatable monsters is chasing you with an appetite to turn you into dinner, the world has a way of evolving.

The filmmakers have therefore transformed the tale we know of a boy saving the day by stealing gold from the heavens for his family into one about star-crossed lovers overcoming great odds to be together as though we don’t receive fifty of those every year. We’re given a well-meaning patriarch in King Brahmwell (Ian McShane) keeping his daughter cooped up so as not to lose her too; his trusted advisor Roderick (Stanley Tucci)—the villainous fiancé—who hopes to steal the power King Eric once had for evil; and an honorable protector in Elmont (Ewan McGregor) watching over Isabelle like an older brother. They all push her to the edge of patience and into the arms of Jack’s sensitive and caring outsider. He in turn provides the chance to prove their might.

Singer and McQuarrie paint with welcomingly broad brushstrokes as Tucci delights in his vile treachery and Hoult in his unassuming bravery. While it doesn’t take a brain surgeon to guess how the mythical royal crown turns from saving grace to destroyer courtesy of mankind’s greed, Jack the Giant Slayer also never panders or bores on its way to happily ever after. From impressive computer effects bringing the twenty-foot General Fallon (Bill Nighy) and friends to life to the gnarled branches of Gloucestershire’s Forest of Dean’s Puzzlewood to the humor infused inside the action, Singer used his extra year of post-production well. A solid reimagining of a classic and fun popcorn flick for the whole family, I guess there are just too many characters dying off-screen in mashing giant teeth for the MPAA’s liking.

This is ultimately why the film will probably end up labeled a failure. Too many older teens will be disappointed it isn’t as dark as they assume and not enough youngsters will have given the chance to see it due to fearful parents. It’s a shame because Tucci practically twirls his moustache the whole time, Ewen Bremner gives elastic comic relief, McGregor is great as the consummate white knight of valor, and Nighy perfectly embodies their antagonistic foe. Add to them our leads—two characters providing honorable role models for children searching for an identity—and you have the complete package. Tomlinson and Hoult break free from stereotype to become heroes our youth should aspire towards as Jack’s legend comes alive with all the wonderment that’s helped it survive two centuries intact.