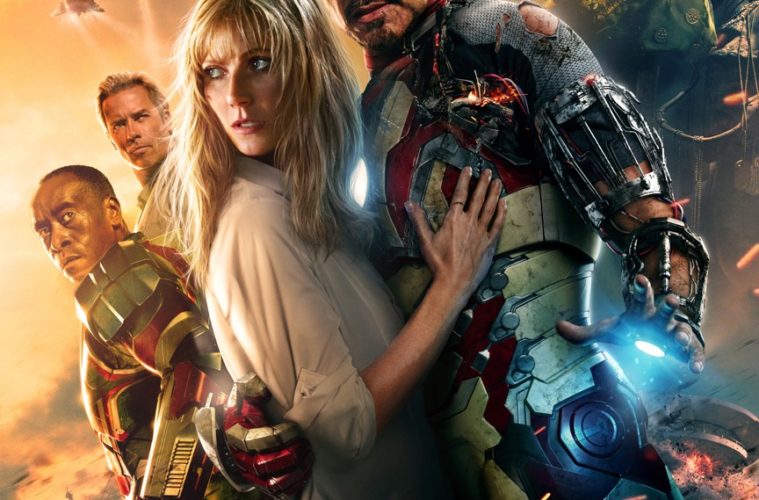 Phase Two of Marvel’s cinematic universe begins with the character that started their astronomically successful multi-narrative platform—Iron Man. And while a line of text following the always-assured post-credits sequence states that “Tony Stark will be back,” the question remains whether or not actor Robert Downey Jr. will be under the helmet. It’s therefore no surprise to see the studio looking to end this trilogy with a bit of arc closure just in case as the progression from a once billionaire playboy to the monogamous boyfriend slowly accepting the new title of “world hero” he’s become is a wide chasm to span. Following closely after the events of The Avengers where Stark nearly died falling back to Earth through a wormhole in space, Iron Man 3 gets the job done. With original steward Jon Favreau stepping out of the director’s chair to contentedly reprise his role as bodyguard Happy Hogan—and receive a producing credit—one couldn’t have dreamed of a better successor than Shane Black. Known for the quick-witted, sarcastic humor seen in Lethal Weapon and the Downey Jr.-starring Kiss Kiss Bang Bang, Black brings a sensibility to the table perfectly suited to his lead’s strengths. Finding his Tony Stark riddled by anxiety attacks and fear for his and love Pepper Potts’ (Gwyneth Paltrow) mortality, the snide retorts and overly brazen attitude can’t help but increase in an attempt to manufacture a steely cold façade of indifference. Unfortunately, even this can’t protect him from the hard-to-believe supernatural reality of aliens his current science is simply too ill equipped to explain.

So we watch Colonel James Rhodes’ (Don Cheadle) War Machine rebranded as Iron Patriot to take charge of defending America while Stark protects the world; catch the overworked, biting tone of Tony’s A.I. Jarvis (Paul Bettany) stretched thin by the self-proclaimed tinkerer spending sleepless nights building new and improved suits; and witness Pepper’s role as head of Stark Industries providing her the responsibility she always deserved. Everyone has evolved to take pressure off Stark’s shoulders so he may contend with the impossible events surrounding Loki’s failed takeover of their world. Now a changed man unable to wrap his head around the problem, however, Tony needs a domestic terrorist like The Mandarin (Ben Kingsley) to focus his efforts on while realizing he has another team besides his super friends prevailing against evil in their own adventures. Similar in style to Black’s Kiss Kiss Bang Bang as far as beginning in voiceover, we take a quick glimpse back to 1999 in order to set the stage for the ‘demons’ Stark creates via his trademarked selfish actions. It’s New Year’s Eve, Happy is channeling Vincent Vega, and we meet two scientists who will play a large role in present chaos named Maya Hansen (Rebecca Hall) and Aldrich Killian (Guy Pearce)—as well as another integral to the franchise’s first film. Taken by Black and co-writer Drew Pearce from Warren Ellis’ Extremis comic arc, these two throwaways from Stark’s past life of philandering return just as bombs start exploding in what The Mandarin calls “a series of lessons for the US”. Unable to sit back watching, Tony recklessly puts himself in the crosshairs and makes the terrorist’s capture into a personal vendetta.

From here we discover the relationships between Maya’s idealistic DNA manipulator, smoothly confident think tank leader Killian, and The Mandarin’s monster directly threatening the American public and their president (William Sadler). Alterations to canon are made where these characters are concerned to keep things fresh for comic fans; a cellular regrowth formula is introduced with the pesky glitch of combustion if body temperatures exceed capacity; and Stark is eventually found alone in the snow needing the assistance of young Harley Keener (Ty Simpkins) to survive. Twists and turns drenched in guffaw-inducing humor follow that I won’t spoil here and what was assumed to be a story about Iron Man fulfilling his leadership potential turns into one where the man inside accepts the suit as nothing more than a tool at his disposal. As such, Iron Man 3 finds Tony Stark growing into his skin away from the superheroics. Much of the journey he takes following leads to the center of this terrorist plot involve him out in the open, physically and emotionally fragile towards what’s to come. He must prove he is the man everyone assumes he is, admitting his shortcomings and accepting his fallibility while still driving forward into the abyss confident and fearless. Downey Jr. shows us the duality to his role without a mask this time around, playing MacGuyver to get by and relying on the help of friends like Rhodes. And rather than a computer-generated climax of animated heroes sparring against villains we receive a fun shootout with Downey Jr. and Cheadle side by side a la Black’s old chums Riggs and Murtaugh.

We had the bombastic insanity of supernatural meets science fiction last year with The Avengers and Marvel wisely understood it was necessary to take a step back and inject a human element back into the fold. While characters like The Mandarin are larger than life they’re still mortal creatures made of flesh and bone in some form or another. Black and company allow the comic book implausibility to be explained in actual terms with sleight of hand or ambitious bouts of vengeance or the rebirth of moral honor where greed had taken over. Everyone from Pearce, Hall, Kingsley, and Paltrow find themselves engaged in wide-eyed innocence and rage-fueled darkness at some point, mirroring Stark’s own internal wrestling over identity. And once the dust of everything we had known settles, the man left standing finally lives up to the hope Nick Fury had at the start.