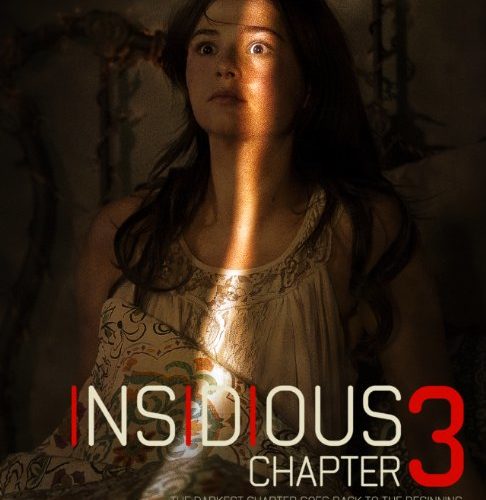 The blaring, nerve-jangling violin jamboree that accompanies the assaulting opening titles of Insidious: Chapter 3 tells you all you really need to know. Escalating from the abrasive chords of the original film to what sounds like Hell’s version of a Klesmar band, the soundscape of Insidious 3 promises an in-your-face experience, heightened to the point of near parody. We’ve come far enough in the series that many have probably stopped regarding the first two films as the half-baked knock-offs they were, and may come here expecting to see the franchise taken to the next level. Leigh Whannell steps in for James Wan—who directed the previous two and recently helmed The Conjuring and Furious 7— and does indeed take it some kind of other level, but he also forgets many of the lessons he and Wan learned on the previous two. Yes, the movie will probably break your sense of calm more than a few times, but you’ll feel cheap and silly when it does.

Mounted not as a continuation of the other films—the Lambert haunting is referenced here as being a few years off yet—but as a prequel to them, Chapter 3 does have one welcome trick up it’s sleeve, putting actress Lin Shaye front and center as gifted psychic Elise Rainer, who was pulling Zelda Rubinstein duty in those earlier outings. When we see her for the first time here, Rainer is neither the burgeoning young psychic from Part 2’s intro, or the confident ghost buster who showed up to battle evil in Part 1; she’s a mild-mannered but melancholic recluse, mourning a loss and lacking confidence in her ability, crashed by some unseen prior event. She’s visited by teenager Quinn Brenner (Stefanie Scott), who is in pain over the loss of her mother and wants the psychic to help her reach out and make the connection. After some expected spookshow theatrics, Elise starts to suspect that there’s another, darker force trying to make contact with Quinn and pleads with her not to speak to it.

So eager is Whannell to skip right to the scares, that he creates the film’s first somewhat satirical moment when we cut from Elise’s warning to Quinn sitting in bed trying to converse with her dear departed mum when something else decides to crash the party. This entity—a shadowy geriatric wearing a ventilator and sporting a seriously soiled hospital gown—comes armed with all the bells-and-whistles of your average dime-store Halloween sale. There are ominous knocks on the wall, cracks in the ceiling, dripping footprints that look like Sasquatch ran through a wet ink factory, and that classic standby where a rotting corpse is so nimble they can scurry from window drape to ceiling and then back, dashing under the bed, all in the blink-of-an-eye. Quinn is understandably unnerved, especially when she’s coaxed by the spirit to step in front of a car. She survives, but we the audience take note that no one in a horror movie ever has a near-death experience without bringing back—or leaving there—something from the ‘other side.’

Anyone just showing up for a few quick jump scares and some requisite callbacks to the other movies will probably get their money’s worth, but Insidious: Chapter 3 is largely a tired and disinterested affair on the horror front. It has one method of fright, a scorched earth jump scare that reminds of that internet prank where you stare at a pic of a rustic farmhouse or cute chickens until a gif of a deformed face pops up accompanied by an ear-splitting shriek. Honestly, that’s all they’ve got going on here, and Whannell and his team use it to the point that it eventually ellicits laughs instead of shock. To set-up theses scenes requires that, at some point, every character in this movie be sitting in bed waiting for something spooky to happen. More of this film takes place in the bedroom than your average erotic thriller, and if you consider ghoulish gimmicks the horror equivalent of love scnes, Insidious probably has a better ratio of ‘money shots’ too. All of that may explain why many of the secondary characters surrounding Scott and Shaye are hastily sketched and move in out and of the story haphazardly. Dermot Mulrooney is Quinn’s dad, but his introduction as widowed, clueless father is as perfunctory as if he were showing up in that other type of movie as ‘the plumber, here to clean the pipes.’

The script here is mercifully less convoluted than the second Insidious film, which trotted out time-travel and cross-dressing mommy issues to muddy its supernatural entity’s backstory, but it also reduces the concept of that mysterious world of The Further so that it only registers as a basic creep-show identity. There is a disappointing lack of development of the spiritual plane and its various levels of existence; this is the same amateur haunted-house visualization as last time, with no new wrinkles outside of the acquiesence that The Further also contains a brighter, cheerier clime where good souls go. In fact, the trite distillation of what passes for good and evil in a spiritual world is one of the film’s most numbing conceits.The best work a prequel could do to embellish and enrich the other films would be to give us a better understanding and mythology of this place, but it instead spends its time fleshing out real-world elements that we could have easily imagined for ourselves if we had given them any thought. I’d be more compelled by what transforms a spirt from lost soul to life-eating demon than knowing exactly how it is Shaye’s Elise first met Whannell’s Specs and Angus Sampson’s Tucker, the two bumbling assistants who provided comedy relief previously.

There is one aspect of Insidious: Chapter 3 that does work as intended, and it almost saves the movie from itself; the performances of Lin Shaye and Stefanie Scott, who get to play real characters dealing with their grief in the face of supernatural awareness. Scott is new to the horror genre, but she has a sweet sunniness that is often out of place in this type of film. When she’s under attack she’s confused but persistent, and I liked the way she’s still willing to seek out her mother despite the darkness she’s faced thus far. Later, the demonic entity, whose possession motto seems to be ‘drive it like you stole it,’ takes over her body and Scott gets to channel her inner Linda Blair, kicking off her leg casts like a pro-punter. Give it up for Shaye, who makes Elise a powerful and emotional force in the film, grounding all the silliness by making us believe in this woman who must take personal inventory of what it means to battle the paranormal. Shaye is poignant and believable in the early chapters, and shows real spunk in the final third. There’s one sequence in particularly, where I half expected her to recycle her infamous finger-tongue wag stunt from Kingpin right before she comes to blows with the transvestite witch.

All of that value is ultimately wasted, though, because Whannell doesn’t seem all that interested in setting the mood or building anticipation. He’s going for the hammer blow every time, and although these sequences are so forceful they achieve their aim, there’s a price for that kind of bully showmanship and it robs the story being told of its drama. Which is ultimately a shame, because Shaye does present us with a glimpse of what a film truly centered on Elise might look like. In fact, she’s done such a good job, I’d rather see Elise crossover planes from Insidious and head off into other paranormal franchises, providing that proverbial kick-in-the-pants to now-tired demonic pranksters. Maybe along the way, she can meet Bruce Campbell’s Ash and they can take on The Evil Dead.