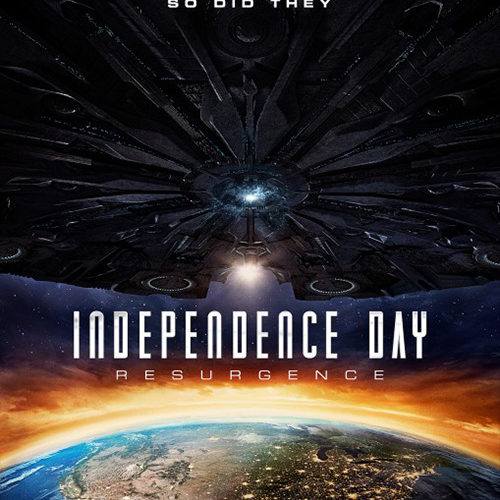 Twenty years after Independence Day ramped up cinema’s obsession with mass destruction, its sequel ricochets between repetition and semi-clever subversion. London, flattened in the first film but apparently rebuilt precisely as it was before, is fried again, the Burj Khalifa torn from Dubai by the gravity of a continent-sized alien spaceship and knifing right through the Eye. But, at the same time, said spaceship stops juuuuust short of smushing the White House this time around. When Earth’s hapless defenders attempt the same tricks to beat the aliens as before, they’re outmaneuvered. In too many ways, though, Independence Day: Resurgence takes the Force Awakens approach and remakes the original BUT BIGGER more than it does its own thing.

Resurgence starts from the premise that the alien war of 1996 united humanity, which has since used extraterrestrial tech to successfully build a stronger-loving world. It’s a semi-utopian rebuke to blockbuster jingoism. Hell, it means the now-obligatory marginal Chinese roles barely feel shoehorned in. (I mean, it’s still weird when two Americans use QQ to video chat, but whatever.) Writer-director Roland Emmerich and his small army of co-writers excel at populating their stories with a variety of characters who can maximize their sometimes-minimal screentime. There’s an honest-to-God feeling of disparate peoples coming together for the greater good, as opposed to a tiny group of protagonists mostly fighting against and for faceless extras.

But the film stumbles in its attempts to retrace its predecessor, hitting the beats but wrecking the structure. Where Independence Day takes its time to build up to the iconic White House lasering, Resurgence rushes through the “doom is mounting” stage, which does a reasonably good job of reintroducing the returning characters (Jeff Goldblum, Bill Pullman, Maika–Monroe-Who-Used-To-Be-Mae–Whitman, etc) but a poor job of establishing the new ones (The Hemsworth Who Isn’t Thor, Charlotte Gainsbourg, Sela Ward, etc). The surfeit of all-CGI environments (the Moon, a futuristic super-stadium, the giant spaceship) leads to the usual rushing of action. A near-catastrophe on a lunar construction project emerges and is resolved within three minutes or so. The apocalyptic alien craft sweeps over the globe in less time than the relatively reserved mass blasting of major cities takes in the first movie. Resurgence is more stuffed but is nearly half an hour shorter than ID4. Where’s the ambition in that?

It doesn’t help that, though the script does a remarkable job of recapturing the original’s winning sense of goofiness and the cast is game for it, it severely lacks a Will Smith. It certainly seems to be casting about for one, but it has no grounding heart. Instead, all those characters are left to converge on Area 51 (just as in the first movie), but too many don’t get quite a satisfactory role to play in the climactic battle, which stretches on for an awfully long time.

Emmerich, usually a maestro of catastrophe, demonstrates varying degrees of interest in constructing large-scale setpieces here. In a near-blasphemous move, the camera cuts away almost entirely from the biggest explosion in the film. Though that has nothing on the brutally rushed ending — or “ending,” given the gotta-hook-em-for-a-sequel angle. And yet, despite all this, Independence Day: Resurgence still emerges as one of the better blockbusters of this summer, and that’s only halfway damning with faint praise. It’s a mess, but I grinned a good portion of the way through.