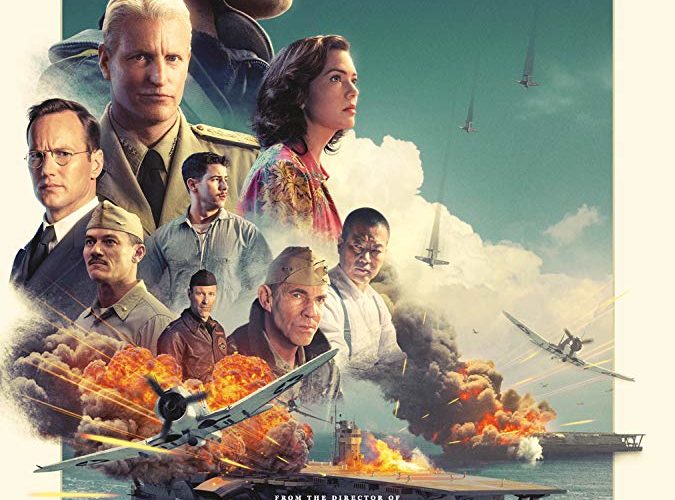 Midway, directed by Roland Emmerich, is a kinda-remake of a not-very-good movie from 1976 about the impressive World War II battle. For as consequential as the Battle of Midway was, let us hope there will one day be a feature film to properly match the subject matter. The first Midway, directed by Jack Smight, starred some of the biggest–and oldest–stars at the time: Charlton Heston, Henry Fonda, and Robert Mitchum, to name a few. This new one is a little lighter on the star power. There’s Dennis Quaid, Aaron Eckhart, and a wig-heavy Woody Harrelson to be sure, but the majority of screen time is devoted to a younger set of talent. Ed Skrein leads the ensemble, playing a cocksure soldier named Dick Best. It is a character name that, was it not based on a real-life hero, would be a bit too much. But then, it does fit here. Emmerich’s blockbuster, written by Wes Tooke, bathes in brazenly expository dialogue and viciously predictable character moments.

Most will recall 2001’s Pearl Harbor more than anything else. The CGI-laden dogfights are about as entertaining (a compliment in a way) and the wooden dialogue is a touch worse. The biggest difference, however, is the star power. If there is one thing that’s aged well in the eighteen years since Michael Bay’s opus, it’s the lead performances. As silly as some of it plays, Ben Affleck and Kate Beckinsale are comfortable in the matinee idol spotlight. And this writer will defend the positives of Josh Hartnett until his dying day. In Midway circa 2019, Skrein does his best (pun intended) with a tough-guy accent, aided only slightly by pros like Patrick Wilson and Luke Evans. Pretty faces Nick Jonas and Darren Criss looks a little lost throughout. For the brief moments she’s in the picture, Mandy Moore’s presence is welcome, playing Mrs. Best. All-in-all, the game cast is less than the sum of its parts.

Emmerich and Tooke expand their narrative past just the Battle of Midway, rather starting before December 7, 1941, touching on the Doolittle Raid (Eckhart plays Doolittle with a particular gruffness) before finally landing on the titular island. It speaks to the brisk pace at which Emmerich tells his stories. Despite the 138-minute running time, the film moves well enough. Snappy editing and engaging sound design do a lot of work from set-piece to set-piece. In Midway (1976), archival footage from the Pacific was utilized in the film. Here, the filmmakers pay homage to John Ford, who captured much of said footage, which was cut into the Oscar-winning short doc The Battle of Midway. The legendary director is played by Geoffrey Blake with some gusto.

Over forty years ago, when Jack Smight adapted this battle on to celluloid, the event ensemble picture was all the rage. It was a time of Airport, Earthquake, and The Towering Inferno. The biggest hits with the biggest stars and the biggest budgets. How strange that now this film feels like a huge risk instead of a sure thing.

Midway is now in wide release.