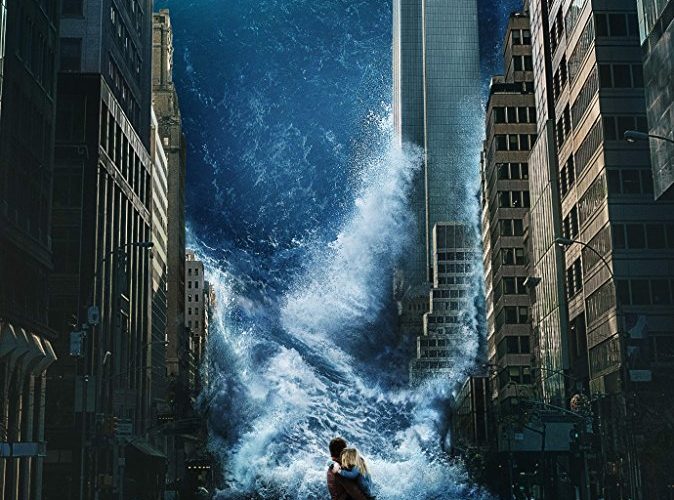 Review: ‘Geostorm’ is the Worst Kind of Shlock

Oh, that darn Internet of Things! One of these days all of our internet-connected devices may conspire against us and in a smarter picture with a more biting commentary, we might just get some real perspective on how disruptive playing God might be, as our overlords control our every move for the sake of our connivence, weaponizing data and our daily routines. I bring this up because Geostorm is, at its heart, a conspiracy thriller wrapped in a disaster movie (after all, that makes for a better trailer) with slick professional visual effects, even if Orlando and Washington, D.C. don’t look like Orlando and Washington D.C., because those places don’t have great tax incentives for movie productions. It’s ironic, of course, for a film that shows us oceans suddenly freezing on a sunny day in Rio de Janeiro, tidal waves drowning Dubai, and a heatwave in the middle of winter in Russia. Recent disasters have caused multiple humanitarian crises just this year alone, but rather than taking aim at Geostorm for being exploitative, the film’s greatest offense is being simply incompetent as big-budget entertainment.

Set in the not-too-distant future when the Democrats have regained the White House, a U.S.-led commission called “Dutch Boy” launches a series of satellites to keep weather globally in check. Who needs Al Gore when you have the Internet of Things? The effort is led by satellite designer Jack Lawson (Gerard Butler) and his brother Max (Jim Sturgess) until Jack is pulled off the project for a poor performance in front of a congressional committee.

Something goes haywire at Dutch Boy’s international space station, leading to a series of mishaps and just when he’s out, living a quiet life with his wife and daughter on the bayou, Jack is drafted back in. As it turns out, something is running afoul and it’s up to Jack and space station commander Ute Fassbinder (Alexandra Maria Lara) to figure it out. Back on Earth, Max starts to suspect his own government of a conspiracy and tries to get face time with president Andrew Palma (Andy Garcia). His fiancée, Secret Service Agent Sarah Wilson (Abbie Cornish), has her doubts until she witnesses the murder of a Chinese climate scientist in what we are told is Dupont Circle, but looks nothing like the iconic Washington D.C. neighborhood.

Despite being sold as a conspiracy thriller, what follows is actually a bland procedural with scientists and government officials poring over code trying to make sense of a virus that’s infected Dutch Boy, wreaking havoc in various parts of the world. Each is given a “designated survivor,” from the boy in India who is displaced from his dog to a bikini-clad sunbather in Rio outrunning an ice storm.

Geostorm is the worst kind of shlock. It’s got all the elements of dumb camp without much of the fun, wasting a talented supporting cast, including Eugenio Derbez (the Mexican star who has broken out in Instructions Not Included and this year’s hilarious How To Be A Latin Lover) to Ed Harris as the Secretary of State. Taking itself and its premise too seriously, Geostorm is a boring spectacle with a surprisingly narrow, intimate focus. If its characters were a bit more interesting, rather than the dull archetypes they are, this kind of chamber drama might work. Yet, they are as bland as their names (Jack Lawson, Sarah Wilson, Duncan Taylor, Al Hernandez, etc.).

The film’s narrative incompetence gives way to larger, more troubling issues, including its commentary on American exceptionalism as we learn the Dutch Boy is about to be handed over to the international community. As if things weren’t polarized enough in the country, more politically troubling is an electric storm that wipes out one national party — then again, that’s giving this film a little too much credit.

The directorial debut of Dean Devlin, a frequent collaborator of Roland Emmerich, Geostorm does too much and too little. You’d think for all the cities these guys have blown up, they’d at least show us something new and unexpected here. The film reeks of a movie where a bunch of cooks got together to try and save the slick disaster movie the studio is attempting to trick audiences into buying. Unfortunately, the gleefully absurd ingenuity of Geostorm stops at its title.

Geostorm is now in wide release.