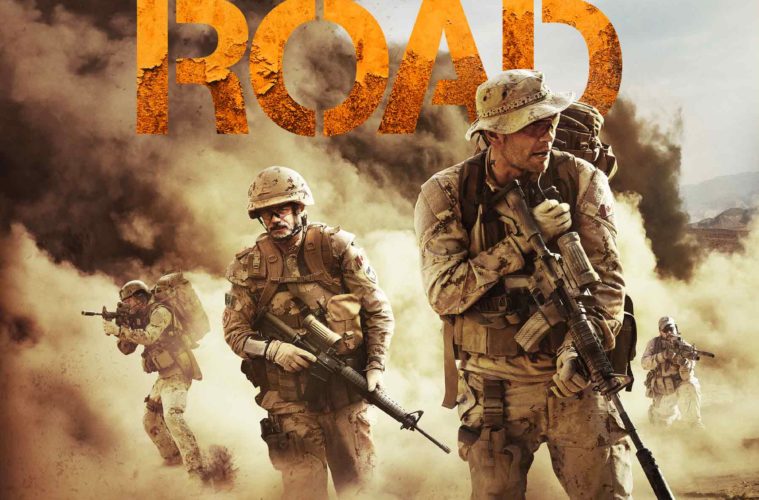 As unusual as it may seem, filmmaker Guy Maddin made a documentary about the making of a mid-budget Canadian war film called Hyena Road with his creative partners Evan and Galen Johnson. Titled Bring Me The Head of Tim Horton, Maddin and company take a tongue-in-cheek look behind the scenes, offering some truly twisted and intentionally warped imagery in the style of their recent gem, The Forbidden Room. It’s a hilariously strange short film, and a perfect Hyena Road companion piece, one which Maddin playfully compared to Hearts of Darkness, the essential documentary about the making of Apocalypse Now. Tim Horton‘s parent film, Hyena Road, is less essential, but nonetheless a well-crafted piece of technical filmmaking.

Set in and around Kandahar, Afghanistan, the film follows ground-level soldiers overseeing the construction of a road built for military use — one called (you guessed it!) Hyena Road. Unlike Michael Bay’s recent 13 Hours: The Secret Soldiers of Benghazi, which was based on a true story, the politics within the fictional Hyena Road are more complexly muddled, the good guys and bad guys more difficult to tell apart. Although this film is sometimes unpredictably plotted, with even a few solidly composed action sequences, it’s ultimately bogged down by its own po-faced sincerity.

The plot revolves around Ryan (Rossif Sutherland), an idealistic sniper in the Canadian military who believes “a six dollar bullet in the right place could change everything.” After the kidnapping of two young children by Taliban warlords, Ryan and his team are trapped in a moralistic conundrum, forced to choose between following the advice of a world-weary Commander (Paul Gross, also the film’s writer-director) and employing those six-dollar bullets.

There are strong moments in which Gross’ narrative moves in unexpected ways, keeping its characters continually off-guard and alert. The moments of violence are scarce but impactful, with Gross and company employing a slow-burn approach to action. The dialogue alternates between richly authentic, soldiers communicating in hand-signals and military jargon, and downright cringe-worthy, with characters dropping lowbrow, tough-guy platitudes à la John Rambo’s deadbeat brother. Again and again, these lines drop lifeless to the floor. It’s a well-plotted narrative by Gross, but you will not be quoting any of its dialogue on the drive home, unless in jest.

The best visual sequence in the film, set on the crowded streets of Kandahar, feels like a gritty Call of Duty mission come to life. A convoy of SUVs is attacked and the soldiers are forced out into the exposed streets, peering around corners in anticipation of gunfire and searching for a way out. In particular, the sequence opens memorably, with a jarringly disquieting bang that shatters any flimsy illusion of safety these soldiers held. The supporting cast, including The Wire‘s Clark Johnson, and David Richmond-Peck , stands out from the shouty din, doing their best with the screenplay’s formulaic dialogue.

Hyena Road‘s action sequences sometimes feel confusingly assembled, seeming to play with the notion that war is unquestionably chaotic. Thankfully, the geography of the SUV attack is deftly conveyed: you never feel confused or unsure where you are in the carnage, the back-and-forth of who’s losing the battle and why / how they’re losing always clear. These may sound like fairly standard expectations for an action movie, but it never ceases to appall me how indecipherable most battle scenes can be.

Indeed, Karim Hussain‘s cinematography is one of this picture’s strong points, creating a chaotically convincing snapshot of war. The technical details feel authentic and the world is vividly rendered through the camera as Hussian’s photography achieves moments of doc-like realism. However, the use of handheld “shaky-cam” is, as in far too many contemporary action movies, overemphasized, adding little to the feeling of tension or intensity.

Asher Lenz‘s score works nicely in quieter moments, such as nights on the base where soldiers wait for the coming day’s horrors. The action sequences drop the subtlety, forcing a pulsing sense of urgency on scenes that would likely work better without. When the music is mercifully stripped down in those few short moments, the panting breaths and crunching gravel under the soldier’s boots scoring the scene, tension suddenly crackles. It’s only when the pulsing music returns that Hyena Road crumbles back into its paint-by-numbers action-picture tone.

Even the film’s depiction of violence seems unfitting for the tone. A bullet hits a Middle Eastern man and the camera spins around him like a Mortal Kombat fatality, dragging the moment out into an uncomfortable celebration of pink mist. Are we supposed to think this is cool? At other times, the violence is ugly and painful — scarring acts that soldiers take no pleasure in committing. The film works best when it’s geared into ground-level battle mode as soldiers duck and dodge the bullets whipping past their helmets.

It’s a shame that Hyena Road doesn’t entirely hold together, although individual sequences work nicely on their own. Lovers of war cinema might forgive the film’s flaws and be thrilled by Hussian’s visuals, but its characters are too paper-thin to compel our emotional engagement beyond casual interest. The explosions are so wonderfully photographed; if only we actually cared about the characters exploding.

Hyena Road opens in theaters and on VOD on March 11th.