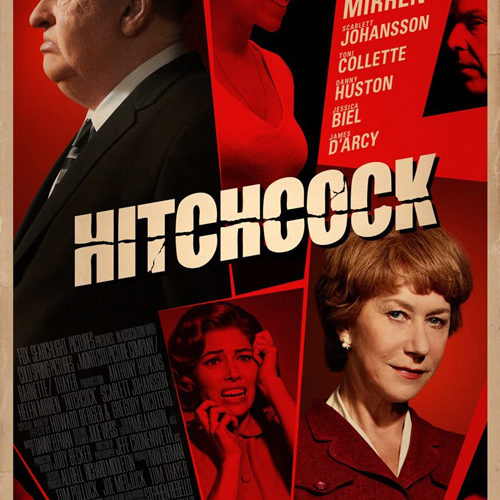 Hitchcock the man, Hitchcock the artist — today, they are almost inseparable. Alfred Hitchcock, “The Master of Suspense,” is widely considered one of the greatest directors in film history. He has the #1 film of all time on the most recent Sight & Sound poll and three more in the top 100, and he appeals endlessly to casual viewers and cinema academics to the point where his films have been analyzed with countless theories both in and out of the film, including the life of the man himself. From his adoration for his leading ladies to his public personality, few directors in film history have ever been so indistinguishable from the myth of their own self.

Hitchcock, the fiction film debut of Sacha Gervasi (Anvil! The Story of Anvil) ,is not terribly interested in myth, acknowledging it where it must, but mostly focusing on Hitchcock the man, with Hitchcock the artist mostly relegated to a background role. Still, it manages to reach honest conclusions about humanism and aging with the help of strong performances from its ensemble. Portrayed by Anthony Hopkins, the actor convincingly mimes Hitchcock’s unusual mannerisms and takes on the unmistakable physical appearance. He splits much of his screen time with Helen Mirren, whose Alma Reville is commanding in both scowl and speech.

Gervasi does not penetrate very deeply the production of Psycho; we see the filming of the shower scene, discussions with the board of censors about nudity and a toilet onscreen, and a couple conversations early in the film about how ridiculous it is for the master to make a low-budget horror film after the smashing success of North By Northwest. Some of it plays with too much of an ironic wink and a nudge to an audience that already knows better, but as famous moments in the production history, leaving them out would be a disservice. There’s just enough to acknowledge that Hitchcock was the genius we know him as, but never enough for us to falsely assume that Gervasi is interested in artistry. Conversely, the relationship between “Hitch” and Janet Leigh (Scarlett Johannson) is never foregrounded; it is brought up a few times throughout the film, but any tale of Hitchcock and his love for his blonde leads is in past-tense conversation here, not action.

In this way, Hitchcock has the deck stacked against it no matter how it plays. Focus too much on myth and the film becomes a retelling of over-told stories; ignore it and its absence carries as much weight as anything that actually makes it on-screen. What we get is too often unfulfilling glimpses of the legends of the man and an abundance of the legends of the artist, so irony supersedes epiphany.

Still, despite its overly modest ambitions, Hitchcock gets the job done. It balances several stories, the only complete dud being Hitchcock’s visions of Ed Gein, the inspiration for Psycho and for some of the character’s more perverse actions. His problem with binge-eating is also brought up far too often to be as inconsequential as it is, but the drama that arises when Alma begins to work on a script with a male friend is convincing motivation for Alfred’s growth and actions. Gervasi makes it clear that his film is about aging, being told you are not good enough and maybe even seeing it in your personal life. Indeed, it is the human side of Alfred that makes Hitchcock a worthwhile watch. Despite the sloppier handling of the aforementioned threads, Hitchcock is a complex character, one with pride, desires, flaws, jealousy and genius. So despite our own desires to see the full myth explored, a firm focus on the man makes the movie flow from one scene to the next with a clear focus. Ed Gein’s presence may not go anywhere, the shallow portrait of alcoholism and binge-eating may never even get off the ground, but their mere presence deepens our understanding of the filmmaker.

Above all, this film is a character study, one that attempts to balance the realities of being human with the myth of being an artist. His problems are universal problems. We are given just enough to understand that Hitchcock is a genius, so seeing him struggle through the dilemmas and worries of an everyman makes a statement about the genius away from his art, the man behind the curtain. Thanks to Hopkins, every detail, no matter how under-realized, makes an impact. We are given pieces of the puzzle a few at a time, and when we put it together they do not make a myth, they make a man.

But more than a man, they make an imperfect man, one who needs a little extra help. That help comes, of course, from his wife. But Alma is more than just a woman waiting on her husband, determined to seize the opportunity to say the perfect line of dialogue that completes him. In Gervasi’s story, she is an essential part of the genius, and when the film acknowledges that he needs her to be a genius, it is still far less patronizing than most other films with a similar premise.

Hitchcock is a Hollywood film that tells a story about Hollywood with an honest attempt to find a complex place for women in the system. So at last, Hitchcock the man is finally separated, at least in part, from Hitchcock the artist, and there is a surprisingly prominent place for a woman in that narrative. Alfred may be the subject, but Alma is more than a foil, a woman who is much like many of Hitchcock’s best characters in that she tries her damnedest to find a complex place in a man’s world, and her struggle illuminates the struggle of our subject. This is a character study first and foremost, but with Alma it becomes a study of the universality of aging, and as such, Hitchcock succeeds with the odds against it.