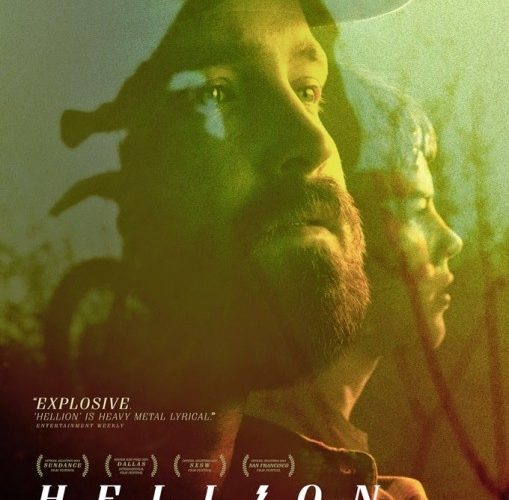 One of the first real stunners of the year has arrived with Kat Candler‘s heart-wrenching drama Hellion. Much like last year’s Short Term 12, this is a feature-length film expanded from an already produced short that depicts troubled kids and the equally troubled adults tasked with providing stability in an unstable world. Anchored by an amazing cast who give their all to conjure emotionally-draining performances one won’t soon forget, each character is set onto a path towards learning what it means to be responsible for one’s own actions. For those of us unfortunate enough to live tragic-filled lives, it’s easy to blame circumstances, lash out at those doling out punishment, and completely ignore one’s own capacity to rise above hardship and prove detractors wrong. We’d rather throw a tantrum and play the victim than hold ourselves accountable.

This is true for everyone—those pretending to be martyrs and those who genuinely are. Hollis Wilson (Aaron Paul, cast as a result of Candler’s appreciation for his turn in Smashed rather than the public’s love for his wise-mouthed Jesse from Breaking Bad) earns the pity of his small, impoverished Texas town due to the horrible fate life has dealt. With his dream house by the beach lying in shambles thanks to Hurricane Ike and the love of his life gone, he unforgivably allows the appeal of drinking himself numb to usurp any desire for showing his two young sons love. When not at work he attempts to rehabilitate their lost home as a final link to his deceased wife, unwittingly condoning thirteen year-old Jacob’s (Josh Wiggins) juvenile delinquency via absenteeism as ten year-old Wes (Deke Garner) follows in tow. There are distinct lines drawn for protection that all understand, yet constantly ignore. It’s Hollis’ duty to raise his kids as a single father way past his prime of being a local school baseball star, but he lets depression and pain consume his soul. The caretaking for Wes therefore falls to an ill-prepared Jacob who can hardly take care of himself with teen rebellion alongside friends beckoning as an easy outlet for frustration. And honestly, unless the authorities catch him, no one’s the wiser. He and Wes are left home alone more often than not so his escapades combating the boredom of being underappreciated and underestimated occur unchecked. As his aggression and confidence increase out of control, though, it becomes only a matter of time before consequence catches up. And that’s exactly where we meet him.

Even as Jacob’s sent to in-school suspension, he still feels slighted. He could have received a lighter sentence if he rolled on his crew (Camron Owens‘ Roger, Dylan Cole‘s Hyder, and Dalton Sutton‘s Lance), but he takes the heat so his unjust victimization can remain intact. And what does Dad do? He yells about how Jacob almost got Wes involved in criminal activity. He blames his son for failing to protect his brother while absolving himself from the reality he should have been watching them both. We’re at the tail end of a vicious cycle of screaming, punishment, and resentment that’s spiraled to a point where rock bottom is the only outcome. Lo and behold it arrives in the form of Child Protective Services taking Wes away to live with his Aunt Pam (Juliette Lewis). Candler paints this broken family with an authenticity that draws one in and forces us to feel their suffocating inability to escape their own pain. We see Hollis try to reach Jacob so many times only for the boy to stone-face him away—as many as the latter’s attempts to open up with a too late call for “Dad” after he’s physically and emotionally gone from the room. They are one and the same: men who cannot cope with the life they’ve been given. So wrapped up in their own baggage, they refuse to see the suffering of those they love. And the sad truth is that Wes being taken away doesn’t become an immediate catalyst for change. It’s used as another excuse for self-pity instead. They transform Pam into another enemy and bolster their defenses more.

The tragedy is that we know Hollis and Jacob are good-hearted souls simply adrift without a paddle, desperately treading water to stay afloat. We see it in their sad eyes, their fighting back tears, and the pained expressions made when trying to suppress the vehement sarcasm they know is much easier to wield than remorse. Paul is brilliant as this father who has officially lost control of himself and his children, simultaneously acting selfish and guilty with each swig of beer and genuinely caring when allowed a moment of clarity before letting Jacob’s insolence tear down all compassion. And Wiggins—a non-acting amateur discovered in the background of someone else’s YouTube videos—is a revelation as the tumultuous young man who doesn’t know how to express himself in any other way than petty violence. It should therefore be a straightforward story ending in either optimistic bliss once these tortured creatures finally grow up or in a bleakly tragic morality tale of permanent destruction. Lesser films have gone one of these two routes, but Candler deftly toes a line at the center for an outcome of heightened darkness and a glimmer of hope. I’ll admit I didn’t see Hellion‘s escalating stakes coming, its potential for horror blindsiding me to the edge of my seat as periphery characters prove more than mirrored pain and criminal activities move from kid stuff to felony. Just as Hollis and Jacob appear to be coping—or at least allowing their emotions to pour out—the world around them worsens. Good intentions become horrible mistakes and the delicate psyche of teens a volatile battlefield of misplaced aggression and hatred.

There are no easy answers to life for the Wilsons and Candler never tries to supply some. She calmly lets them inch towards oblivion to see whether they’ll jump instead. Nothing feels contrived as each success and failure earns its aftermath through conflicted characters unsure of what it means to be supportive. They lost their rock to early death and found themselves living with the hole rather than searching to fill it. Love may be implicit, but it also must be explicitly shown as more than cheering at a football game or bringing takeout home and expecting family dinner when you didn’t show the night before. Saying, “I love you and everything is going to be alright” can often be enough; it’s just a shame we sometimes have to approach the point of no return before realizing it. And even then it’s often too late.